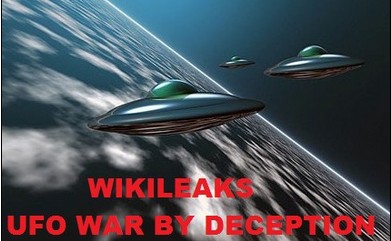 Wikileaks and the UFO: Response to Gordon Duff

I would not so easily dismiss UFO absurdities as comrade Gordon Duff has done in his New Year’s 2011 article: WHY WIKILEAKS DIED:

‘The failed UFO scare, whatever it was supposed to do, has backfired, putting a bullet in the heart of Wikileaks.’

If you use political science to understand this absurdity, it does not appear to be an absurdity at all, but a very important unveiling of the new ‘big lie’ that has been a long time in the making beginning with Orson Wells’ dramatization in New York in 1947 of H. G. Wells ‘War of the Worlds’! That social engineering project prototype to study mass behavior was funded by the Rockefeller Foundation, as it later came out.

Here are some excerpts from my earlier works which actually situate UFOishness in the overarching context of “imperial mobilization” towards cementing world government.

But before reading further, just reflect on what has already been achieved in Wikileaks by mentioning UFO in the same breadth as other core-axioms of empire. Just as the hectoring hegemons have re-implanted the seeds of mythical “Osama Bin Laden” is alive and planning the demise of the Western world now from his new perch in Iran-Pakistan, they have also, formally, planted the seed of what they previously cultivated only vicariously through television shows and movies, Alien Invasion.

So, let me begin with this clip of former American President-actor Ronald Reagan at the United Nations podium in 1987. It is the first minute of Zecharia Sitchin’s ‘Are We Alone In The Universe?’ documentary (and also reflect how is it that novelist Zecharia Sitchin gets so much press and publication time peddling UFOs and the seeds of Secular Humanism and his books are bestsellers, when the only superlatively genuine scholar of the goy, Eustace Mullins, died without even any mention in the mainstream press?). Watch.

This is what I wrote over a year ago in: Tutorial: The Brilliant Construction of World Order – Or a children’s bedtime story :

‘Whereas, the poor monetary reformer fighting the fabricated financial crisis, already the underdog and resourceless in going against an entrenched financial oligarchy with infinitely deep pockets, is also outwitted by the sheer magnitude of the Hegelian design for Global Governance. The momentum created by the disparate crises spanning the gamut of global financial meltdown, global warming, global pandemic, global war on terror, is insurmountable enough. Imagine if the next global crisis after global food panic and global crop failure, is alien sightings and landings!

It will be the coup de grace for bringing the fractious humanity finally together in one-world government “if suddenly there was a threat to this world from some other species from another planet.” As President Ronald Reagan had read out loud from his script at the United Nations podium in 1987: “we often forget how much unites all the members of humanity. Perhaps we need some outside universal threat to make us recognize this common bond. I occasionally think how quickly our differences worldwide would vanish if we were facing an alien threat from outside this world”: http://vimeo.com/4871185

Coming soon to your local friendly skies, complete with the ‘messiah’ and the ‘mahdi’ descending from the heavens on the wings of dove, or the chariots of fire, in their final return to save the now united mankind against the common threats. Maybe there is something to this ‘dajjal’ story, the ‘false messiah’ lore after all! Brought to you courtesy of NASA’s Universal Holographic Satellite Projection System.’

Finally, a reference to Project Camelot and its bizarre focus on UFOs. Below is a link to my more detailed deconstruction of what is going on with so much obsession of dissent-space with bizarredom which make no rational sense unless viewed through the lens of diabolically fabricating “beneficial cognitive diversity”, myth constructions, and finally, the realization of these myths by physical enactment, just as they enacted the “searing” event of 9/11 which split the world into the “before” and the “after” epochs. I had even cautioned Project Camelot in my Email Conversation with Kerry Cassidy of Project Camelot about Wikileaks on the political science service to empire they were perhaps unknowingly being put to:

‘Witness how Wikileaks brouhaha infected even the most outlandish among dissent: Project Camelot. There is no genre of dissent more dissenting than these folks; they search for Aliens, Annunaki, UFOs, as the prime-mover forces behind the psychopathic drive for globalism of the hectoring hegemons! Speak of introducing “beneficial cognitive diversity” with “cognitive infiltration”, this menagerie takes the cake for the political science of immanent dialecticism – with no feigned apologies to Kerry Cassidy who appears to be most sincere in her endeavors.

Surely there are magical aliens flying around in UFOs under the command of the Annunaki fighting Zeus-like epic battles of the gods, or like those scripted in the Gita, using humankind as their patsy genetically engineered children-proxies. But this confabulation is also akin to the fabled Ali Baba flying on his magical carpet who miraculously pulled off 9/11 with box-cutters from its squirrelish perch in Afghanistan, and the people of America still eagerly “United We Stand” against that threat. It is not inconceivable, and is in fact entirely empirical, that the greater agenda going forth is to unite all the peoples of the world against a super Ali Baba++.’

There is nothing absurd and random in anything which comes out of imperial behaviorists who are today masters of inculcating voluntary servitude among the public. Aldous Huxley had aptly summed the agenda of the oligarchy way back in 1961:

‘You can do everything with bayonets except sit on them! If you are going to control any population for any length of time you must have some measure of consent. It’s exceedingly difficult to see how pure terrorism can function indefinitely. It can function for a fairly long time, but I think sooner or later you have to bring in an element of persuasion. An element of getting people to consent to what is happening to them. Well, it seems to me that the nature of the Ultimate Revolution with which we are now faced is precisely this: that we are in process of developing a whole series of techniques which will enable the controlling oligarchy who have always existed and presumably always will exist, to get people actually to love their servitude! This is the, it seems to me the ultimate in malevolent revolution shall we say.’ — Aldous Huxley, 1961 speech at UC Berkeley, minute 04:06

The rulers can “United We Stand” the masses upon any absurdity, if they can get them to believe it. This is Machiavelli 101: Convince People of Absurdities and get them Acquiescing to Atrocities: The Enduring Power of Machiavellian Political Science!

Let’s not forget political science when examining the overarching purpose of Wikileaks, which prima facie appears to be steeped in only absurdities otherwise.

And most importantly, let’s also not forget Hegelian Dialectic – the interplay of opposites, often fabricated, to synthesize a greater whole. I would view Brzezinski’s otherwise absurd role in going against empire on Wikileaks in that fabricated mold, just as he did in February 2007 when he came out against the Bush Administration in his testimony to the Senate Foreign Relations Committee (PDF).

All these are merely the successive Hegelian mind-fcks to make modernity “look like a great ‘booming, buzzing confusion’ to use William James’ famous description of reality,” brazenly argued by the CFR author in his famous 1974 article Hard Road to World Order, as the best method to create the “end run around national sovereignty, eroding it piece by piece”!