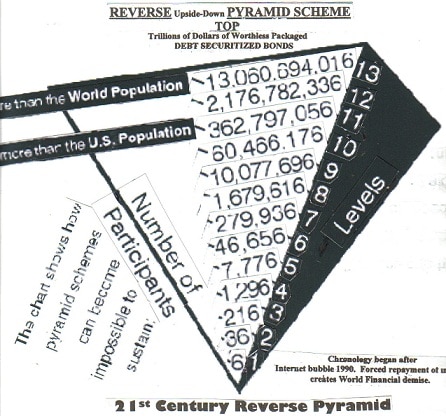 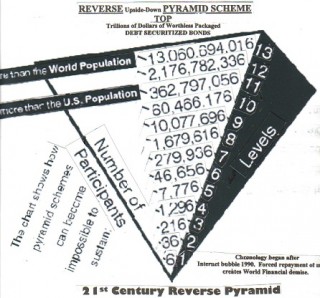 The Pyramid scam fraud is repeated verbatim from c.1660 England to the bowels of lower Manhattan with the formal inception of the “Buttonwod Agreement” c.1792 birth of the New York Stock Exchange financial market.

A sensation that accelerates every human emotion, the Dow Jone rising every day hits new stock market highs.  It feels good,  it is correct, the future is bright, things are going as planned, no need to look any further at soothsayers three card Monte statements “now you see it and now you don’t.” Dow Jones feel good philosophy is not reflecting the US economy or is it correlating wealth of any kind.  It’s a total hoax.

Just do it! The unaccountable underachievers absolute scam distraction diversion tactics and strategy dynamic.  Dow Jones fraud philosophy hoax an ultimate and supreme criminal fraud accomplishment. Circumventing through spells exilirs and myths controlling the labors of the masses and to the detriment of ‘We the People.’ Distracting from the interrelated corruption and the complete shadowing of  illegal wars, brutal occupation invasions of other Nations natural resources, crimes against humanity, genocides, crimes against peace, crimes against International human rights, dismissive arrogant military satraps contempt for Geneva Conventions, Nuremberg Tribunals, Military Code of Honor, theft and confiscation of citizenry labors property assets, ignoring 800 year laws of Habeas Corpus, refusing to obey operating above US Constitution and Articles Bill of Rights.

Financial markets today represent an exclusive mythological ability of the unaccountable bureaucratic apparatus illegal powers to operate levers of grand criminal frauds all interrelated to confiscating the masses labors, property, hard assets, war, death, and destruction on the planet.  Logic dictates that the conflict and war that the U.S. now engages with the laws of physics, mathematics, and the inherent laws of nature will reassert themselves.  Dow Jones stock averages feel good just do it dynamic continues because it feeds on itself with perpetual self destruction.  “Whistle Blower Admits Knowledge of U.S. Systemic Wall Street Financial Welfare Frauds.” Article by Before Its News

Consequently, the primary forces of nature and the laws of mathematics are not arguable.  Therefore, since these forces and laws cannot be disputed or argued America continues to persistently ignor them. These natural laws will be met with an extreme vengeance of U.S. self anointed reverse victim superiority complexes, pious and sanctimonous parodies, and Dow Jones feel good methodologies of final self immolation and annihilation of the planet earth and every living thing.  Corruption and absolute madness that has been building extreme pressure for three hundred years of a criminal hyper fraud culture, of scams and schemes. “Theft Scam Illusions” Posted by 21st Century Reverse Pyramid

“This spiraling interest problem and the need to find new debtors has gone on for over 300 years — ever since the founding of the Bank of England in 1694″ Ms Brown demonstrates that the 300-year Ponzi scheme that has made our money supply identical with the national debt has reached its mathematical limit. Published Book “Web of Debt” by Helen H. Brown

So from c.1660 to c.2010 a crime organization conspiracy inception of the greatest theft of wealth and natural resources in history.  QE1 QE2 instantaneous grand theft, the massive insider trading, daily rigged markets controlled by the Federal Reserve and their ‘select exclusive special interest’ crony banks. Relentless propaganda of cheerleading on the daily theme of Dow Jones myth increasing market wealth if it really feels so good it must be good financial system.  Finally, the third rail scam Dow Jones daily stock averages that catapult ever upward keeping the citizenry in a deep very deep stupor to distract from the criminal corruption in the bowels of lower Manhattan. Mythologies all interrelated to the entire illegal and corrupt bureaucratic apparatus that confiscates citizenry wealth daily and seeks eternal war on humanity.  Instead of concentrating on indigenous natives, ethnic dark peoples, Muslims, religions, and foreign Nationalities, attention should be focused on the bowels of lower Manhattan were the levers of rigged scams, war, grand theft, mass murders are controlled daily.  ADL Covering Up For Financial Elites” Posted by Robert Stark

Notwithstanding, it cannot be disputed or argued that the U.S. operates mythological systemic and controlled rigged markets and three card Monte and zero sum centuries old Pyramid scams.  Therefore, because it cannot be argued or disputed by any individual, entity, Nation, or forum the zero sum scam theft of labor property assets of ‘We the People’ $1 trillions of imaginary collateral.  Imaginary collateral and debt liability that would have had to control the Dow Jones feel good philosophy hoax increasing the confiscation of labor assets and property at $1 million daily soon after Rome was founded and continue for 2,738 years until today.

Conversely,  the Dow Jones feel good hoax dynamic representing the increased paper wealth theft and confiscations starting c.2011 and continue for 2,738 years into the future.  This equation is based on $ 1 trillions of imaginary taxpayer future debt liability and imaginary collateral.  U.S. debt creation liability is estimated to be around 65 $ trillions and growing exponentially. “Entitlements Theft Illusions” Posted by Veterans Today

Controlled levers operated by the zenith of overrepresented select exclusive special interest groups, exposes itself with every Dow Jones illegal transaction daily.  In the past 40 years the United States has gone from being the largest creditor nation to becoming the largest debtor nation under the leadership of three-tenths of 1 percent of the worlds population the ‘overrepresented highest achievers of excellence“ADL Covering Up for Financial Elites” Posted by Robert Stark.