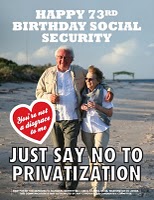 The GOP created mountains of debt by incredibly fundingthree simultaneous wars with tax cuts. Now, it aims at destroying Social Security. Lying bastards. Let’s not give the newly empowered Republicans – and their blindsided tea party allies – the ability to wipe out or even mitigate the only economic security deprived Americans can count on. Where is their heart?

By Helen Thomas, via CounterPunch and the Falls Church News Press

This year, 2011, marks the beginning of baby boomers receiving Social Security checks and they should be alerted of past perennial Republican attempts to partially privatize the program.

Heaven forbid that plans prevail to invest a certain amount of those checks in the stock market, as many pension plans have taken a bath in the current meltdown. While there have been past GOP plans to partially privatize the program, fortunately they have all failed. So far the Social Security trust fund remains tempting for the gamblers and other risk takers on the market.

Editor’s Note: Helen Thomas is a giant of American journalism who was blacklisted and banished by American Zionists for not toeing the Zionist line. Her courage and commitment to truth stand as a monument of defiance to the bigoted and militaristic Zionist forces in our country.

As a Detroiter, I remember the Great Depression and the stock market crash of 1929 when some of the plutocrats on Wall Street jumped out of windows as a result of their great losses. Those were bleak days when some of the jobless workers also lost hope in the bitterly cold winter as they stood in long lines at the Ford Motor Company, many without overcoats, hoping for a job on the auto assembly lines.

The movements for socialism and communism were given some credence as a way out of their misery.

The difference between the Great Depression and the current Great Recession is “spirit” – during the 1930s Americans cared about each other. They flocked to Washington – teachers, social workers, doctors and nurses – selflessly offering their services.

Next door to us, a family with six children lived on a $13 (equivalent to $163 today) per week welfare check. Somehow they survived and kept their faith. Along came FDR who told the stricken people, “You have nothing to fear but fear itself.” The power of hope restored confidence in the country and in its leadership.

We were happy to emerge from the depression, but many Americans at the time believed we rebounded economically because of the looming clouds of World War II. The world by this time was swept up by the “isms.” The U.S. was divided between the interventionists in World War II (on the side of the allies) and the non-interventionists – they were the isolationists – who disappeared at the start of the war on Dec. 7, 1941.

President Roosevelt signed the Social Security Act into law in 1935 to cover the elderly, and eventually through amendments, widows, orphans and the disabled. Payments are split 50-50 by the employer and the worker. What has been missing in our current society is compassion and creativeness. Think of the bargains the President had to strike to renew the biggest (Bush) tax cut to the richest Americans, this in exchange for an extension of unemployment compensation for the millions who lost their jobs – some deal! That’s the compassion part.

As for creativeness, where are the ideas to put people back to work? For Roosevelt, the caring advisors produced a bundle of alphabet agencies. Not the least was the Works Progress Administration which put people to work on rebuilding the broken infrastructure. The program put men on the streets – and even artists painting the walls of great buildings in the Nation’s Capital. Ideas and ideals along with great imagination brought our country back. Where are the caring creators now?

Many believe it was World War II and the military needs that brought us back – but recovery was well underway by 1941 when the Japanese attacked Pearl Harbor.

According to the 2010 Annual Report of the Board of Trustees of the Federal Old-Age and Survivors Insurance and Federal Disability Insurance (OASDI) Trust Funds presented to Congress, 53 million Americans received benefits during 2009, including 36 million retired workers and dependents of retired workers, 6 million survivors of deceased workers, and 10 million disabled workers. During that same year, an estimated 156 million people paid social security taxes through payroll. Total expenditures in 2009 were $686 billion, while revenue totaled $807 billion – including $689 in tax revenue and $118 billion in interest earnings.

Many Republicans believe the Social Security Trust should be at least partly privatized – Bush failed to achieve this in 2005. There is fear as President Obama has claimed that the new Republican leadership will push again to partially privatize social security funds. With the ups and downs of the stock market – and considering the pension plans that were privatized went down the drain – who would lead us down that path again?

Let’s not give the newly empowered Republicans – and their blindsided tea party allies – the ability to wipe out or even mitigate the only economic security deprived Americans can count on. Where is their heart?