Home Economy The Seduction of the Knowledge-Based Society 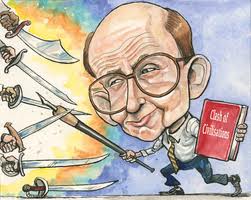 The most promising trend in geopolitics is the transition from hydrocarbon-based economies to knowledge-based societies. Leadership for that change is emerging from Arab nations.

The appeal of the Knowledge Society is apparent. Who could object to nations preparing their citizens for the 21st century? Yet unless knowledge is changed, the result could worsen an already dangerous situation.

The sharing of values and knowledge has long been the best way to bridge cultures and promote peace. That strategy is now essential to counter the success of those promoting The Clash of Civilizations.

This is the inevitable path for the Middle East and North Africa. Yet despite the best of intentions, if knowledge itself is not changed, the impact on Arab societies could aggravate trends that undermine progress.

Just consider the costs when knowledge is corrupted … .

Those who induced the U.S. to war in the Middle East deployed knowledge like a weapon. With lengthy pre-staging, a narrative emerged that made it appear plausible—even desirable—to invade Iraq in response to the provocation of 911.

In retrospect, we now know that the knowledge on which the U.S. relied was false. All of it.

Iraqi WMD. Iraqi ties to Al Qaeda. Iraqi meetings in Prague with Al Qaeda. Iraqi yellowcake uranium from Niger. Iraqi mobile biological laboratories. All false, all traceable to pro-Israelis and all portrayed as true by media outlets dominated by pro-Israelis.

The Knowledge Society holds great potential to connect the Arab world globally. And to build with the West cross-border understanding and empathy. That is the Knowledge Society at its best. At its worse, knowledge can be exploited to manipulate behavior.

The ongoing manipulation of thought and emotion in the U.S. typifies the danger. When Arab nations grasp the common source of the false knowledge that brought war to the region, both the perils and the promise of the Knowledge Society will become apparent.

Yet even the risk of being seduced to war understates the threat. In the modern era, psychological operations (“psy-ops”) are routinely deployed to create consensus opinions and generally accepted truths—akin to the truth of Iraqi WMD.

The modern-day battlefield is the shared field of consciousness. Where else could consensus opinions reside? Or generally accepted truths. There too are found “field-based” phenomena such as credibility and celebrity that are also deployed to exploit thought and emotion.

When waging field-based warfare, the power of association ranks near the top as effective weaponry. For example, with global public opinion the target, Zionists arranged for U.N. testimony in February 2003 by Secretary of State Colin Powell who vouched for intelligence showing that Iraq had mobile biological weapons laboratories.

When the U.N. Security Council and a global television audience watched the testimony of this former four-star general, what they saw was his reputation for honesty. By the power of association, his credibility “bled over” to grant legitimacy to phony intelligence.

General Powell was only a celebrity prop in an elaborately staged play meant to enhance the plausibility of a global war on terrorism. That war began six weeks later.

Where other than in plain sight could such duplicity succeed? You can be watching field-based warfare and still not see it.

Even now, Powell may not yet grasp how two field-based properties (credibility and celebrity) were key to the psy-ops that seduced the U.S. to war for an Israeli agenda.

Mental and emotional exploitation lie at the heart of how knowledge is corrupted to catalyze conflicts, manipulate behavior and influence affairs from afar.

With a solid grasp of the methodology of deceit, the Knowledge Society can expose and, by design, displace those complicit in this cunning form of combat.

In preparing for the 21st Century, Arab nations have an opportunity to free their citizens from the exploitation of those who for centuries have abused knowledge for their selfish ends.

Much of that abuse now proceeds through the unfettered freedom allowed finance. Educated over decades in a “consensus” mindset, lawmakers worldwide now believe in financial freedom as a proxy for personal freedom—regardless of the real-world results.

For the Knowledge Society to realize its potential, modern-day information and communication technologies must make these various forms of duplicity apparent and the perpetrators transparent.

Only with widespread knowledge of how facts can be displaced with false beliefs can the Knowledge Society be protected from such treachery.