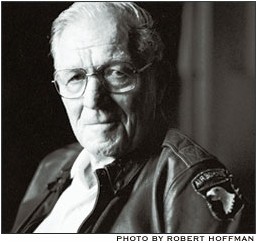 PHILADELPHIA (AP) — Richard “Dick” Winters, the Easy Company commander whose World War II exploits were made famous by the book and television miniseries “Band of Brothers,” died last week in central Pennsylvania. He was 92.

An intensely private and humble man, Winters had asked that news of his death be withheld until after his funeral, Jackson said. Winters lived in Hershey, Pa., but died in suburban Palmyra.

The men Winters led expressed their admiration for their company commander after learning of his death.

William Guarnere, 88, said what he remembers about Winters was “great leadership.”

“When he said ‘Let’s go,’ he was right in the front,” Guarnere, who was called “Wild Bill” by his comrades, said Sunday night from his South Philadelphia home. “He was never in the back. A leader personified.”

Another member of the unit living in Philadelphia, Edward Heffron, 87, said thinking about Winters brought a tear to his eye.

“He was one hell of a guy, one of the greatest soldiers I was ever under,” said Heffron, who had the nickname “Babe” in the company. “He was a wonderful officer, a wonderful leader. He had what you needed, guts and brains. He took care of his men, that’s very important.”

Winters was born Jan. 21, 1918 and studied economics at Franklin & Marshall College before enlisting, according to a biography on the Penn State website.

Winters became the leader of Company E, 506th Regiment, 101st Airborne Division on D-Day, after the death of the company commander during the invasion of Normandy.

During that invasion, Winters led 13 of his men in destroying an enemy battery and obtained a detailed map of German defenses along Utah Beach. In September 1944, he led 20 men in a successful attack on a German force of 200 soldiers. Occupying the Bastogne area of Belgium at the time of the Battle of the Bulge, he and his men held their place until the Third Army broke through enemy lines, and Winters shortly afterward was promoted to major.

After returning home, Winters married his wife, Ethel, in May 1948, and trained infantry and Army Ranger units at Fort Dix during the Korean War. He started a company selling livestock feed to farmers, and he and his family eventually settled in a farmhouse in Hershey, Pa., where he retired.

Historian Stephen Ambrose interviewed Winters for the 1992 book “Band of Brothers,” upon which the HBO miniseries that started airing in September 2001 was based. Winters himself published a memoir in 2006 entitled “Beyond Band of Brothers.”

Two years ago, an exhibit devoted to Winters was dedicated at the Hershey-Derry Township Historical Society. Winters, in frail health in later years, has also been the subject of a campaign to raise money to erect a monument in his honor near the beaches of Normandy.

Winters talked about his view of leadership for an August 2004 article in American History Magazine:

“If you can,” he wrote, “find that peace within yourself, that peace and quiet and confidence that you can pass on to others, so that they know that you are honest and you are fair and will help them, no matter what, when the chips are down.”

When people asked whether he was a hero, he echoed the words of his World War II buddy, Mike Ranney: “No, but I served in a company of heroes.”

“He was a good man, a very good man,” Guarnere said. “I would follow him to hell and back. So would the men from E Company.”

Arrangements for a public memorial service are pending.

On the Net:
ATTENTION READERS
Due to the nature of independent content, VT cannot guarantee content validity.
We ask you to Read Our Content Policy so a clear comprehension of VT's independent non-censored media is understood and given its proper place in the world of news, opinion and media.