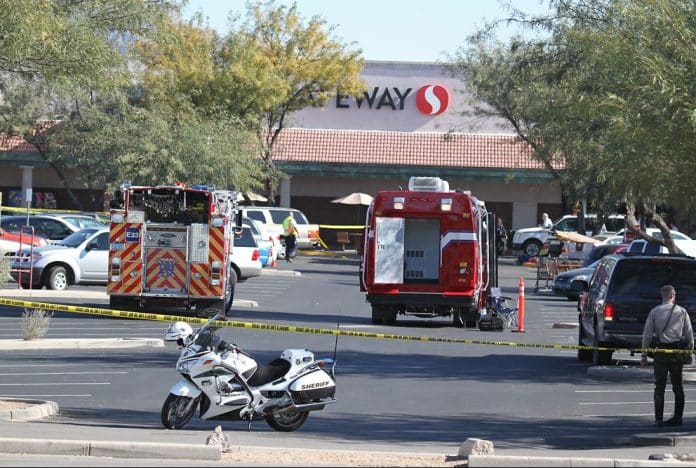 Can Americans Return to Leadership, Responsibility, and Accountability?

Will Home-Grown Extremists Be Marginalized in Time to Save the Future?

It’s a fact that for every 100 American citizens there are 90 guns floating around in the USA. Only Yemen is remotely close to the USA in this race to the bottom at 61 out of 100. Yemen! The USA is the most armed country in the world!

And while US media is incessant about the so-called violence coming from Mexico, they fail to illuminate the truth that America is the most violent and # 1 in guns and people in jail per capita.  It’s an embarrassment.

In fact, American readers should know the true fact that guns are basically illegal to own in Mexico.

As it stands, there are NO gun shops to speak of in Mexico.  Unlike the extremist who shot up people in Arizona this past week, in Mexico, one cannot buy bullets at the Wal-Mart or purchase a Glock 9mm at the local equivalent of a Big-5.

Mexico is simply not like the USA in this regard and thus, on the average Mexican street, its’ inherently safer by far which is contrary to what is told to Americans from the mainstream media.

They insanely believe that Mexico is more violent.   It’s bordering on psychotic and neurotic when people who live in a police state surrounded by guns, violence, prisons as industries, and more drugs in the streets than most of the countries on earth combined try to point fingers at others as perpetrators of social distortion.

Now admittedly Mexico has drug dealers killing other drug dealers to sell products to the American consumer and that’s a serious challenge for both the USA and Mexico. And yes, over the last few years, it’s gotten more violent within these competing business entities. But in Mexico, it’s mostly limited to a fight between competitors for market share and generally does NOT spill over into the general population of over 100 million who go about their days working and enjoying life in what is essentially a peaceful country that happens to be a major supplier of product to a country that has an insatiable appetite for drugs.

Of course, there are guns in Mexico.  They mainly come from the USA and they are used to enforce business territories.  So yeah, there is a really big problem. In fact, there is absolutely no doubt that this is a significant challenge that Mexico faces every day as it transfers into a new paradigm and prosperity for the 21st century.  So it’s a very sore spot for people who are very proud and rich in culture. It’s clearly something that Mexican leaders are concerned about and their recent crackdowns are evidence that the drug war is being fought with full force albeit to no avail as the USA’s demand continues to be strong and without limits.

But in Mexico, real wages are still relatively low and so Mexicans tend to look the other way. They sacrifice what they know is morally wrong in favor of feeding their families. So they let it go with one eye open and one eye closed.  But the USA?

Wow! The USA is uniquely violent and offensive against its own.  It spills into the public domain everywhere.  Intolerance, racism, hate, uber greed, and anger!  It’s ugly!  With all the horrible intolerance and many of its leaders inciting violence, it is much sadder.   Many Americans I have spoken to about this reality are really starting to get embarrassed by it all and want a real paradigm shift.   They want a bright future and not this vitriol that destroys the fabric of the culture.

In the past, America has been a model for success but now it’s becoming a bad joke around the world.  It is a national disgrace and a national crisis.

It’s this writer’s hope that the assassination attempt on Congresswomen Gifford in Arizona and the killing of 6 a Federal Judge and a 9-year-old girl this past week forces the majority of Americans to begin the process of self-evaluation and personal responsibility.   Let it be a wake-up call to all that it’s time to end the war on ourselves.

In other words, let’s hope the collective American soul stops pointing fingers at others outside her borders and begins the real process of healing the infirmed culture by taking that long look in the mirror.

Let us start the healing by ending our incessant mantra that the USA is # 1!   It’s pretentious and quite offensive to the outside global community who look and see the ugly and get turned off.   It’s not helpful at all.  In fact, the USA really is not so great anymore and so it really has no right to tell others that they are lesser in culture, ideology, and morality. After all, the USA sold its integrity and ability to influence in favor of fake wars and killing of common peoples in occupied lands with impunity and arrogance reserved for the 20th century’s biggest thugs!

In fact, this arrogance has to stop if the USA is going to be part of the global leadership moving forward in the 21st century. Otherwise, if the USA fails to take this negative and turn it into a positive, it will sadly continue down the path of losing its grip on an ability to affect the global consciousness.

Moreover, it’s this consciousness that has a direct effect on the culture and standards of living moving forward. In short, the USA will become just another country and nothing to emulate whatsoever if it continues to disrespect itself, its once proud and honored values, and pretend that extremism is a fine disposition while we preach to others that extremism elsewhere is an enemy. It is this hypocrisy that would directly affect our children and their children for generations to come as the global world kisses us in the door and laughs with contempt as we exit in our 3rd world suit.   We really need to marginalize the extremists here in the USA now and not play around anymore.   Extremists are the fungus among us!.

I mean, maybe Americans should start to “boo” the extremists no matter where they come from or what media they represent. It’s all these big mouths that self-indulge in their own ego-profits while they pose as leaders who abuse the public and the greater global community who are the real enemy of the state. And I really don’t want to hear any apologies try to sugarcoat it. Leadership, accountability, and responsibility are not just words, they are real genuine mantras that we must live by indeed.

So maybe we should consider yelling out a significant heckling “Booooooooooooooo!” to those who incite and get them off the leadership stage for the sake of the future generations. Throw proverbial tomatoes at them! (the operative word is proverbial, meaning, not really throw tomatoes but to reject them as leaders) Anyway, they deserve a rejection! You get the point!

More, we might consider advocating to have these extremists arrested for crimes against Americans. How about putting laws up that put restraints on extremists who choose to incite violence in media? Is that a good idea? I think so! It’s time to put an end to Extremist Entertainment posing as news!

It seems to me that children should have a future that is better than this garbage! So I say be bold and stand up for good. It’s time for all extremists to sit down on the bench and go back to their marginalized corners.

There is just no room for them at the leadership table anymore. They had their chance and it ended in a massacre in an Arizona strip mall on a bloody Saturday.  In the name of love, it’s time the dark negative forces go away and it’s time Americans come out and return to the light.