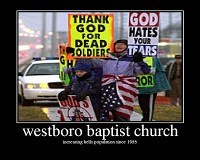 There can be no doubt left that this group is all about hate and causing more heartache for attention. This is what they use for an excuse to protest at the funeral for a nine year old girl?

Will the voices of hate and division at least condemn this hate group?

A nine year old girl killed deserves this? Are they trying to say this child deserved to die because she is Catholic?

Westboro Baptist Church plans to picket funerals of the Tucson shooting victims
Groups want to show support for the families of the victims
They will be silent and nonconfrontational, organizers say
The funeral of 9-year-old Christina Green set for Thursday

Tucson, Arizona (CNN) — Tucson just isn’t that kind of town, says Christin Gilmer.
Gilmer is referring to the actions of Westboro Baptist Church of Topeka, Kansas, which has made its name protesting the funerals of people who died of AIDS, gay people, soldiers and even Coretta Scott King.
But when the church announced its intention to picket the funeral of a 9-year-old girl — one of six people who died Saturday during the attempted assassination of U.S. Rep. Gabrielle Giffords — Gilmer and others put their feet down.
Tucson is a “caring, loving, peaceful community,” according to Gilmer, who said two of the six people killed were friends.
“For something like this to happen in Tucson was a really big shock to us all,” she said. “Our nightmare happened when we saw Westboro Baptist Church was going to picket the funerals.”

They protested military funerals and claimed that it was because the military allowed gays to serve. What’s their excuse now? Not that anything they say is worthy of what they have done to families just trying to grieve the loss of someone they loved, but now it seems no family is safe from their pure hatred.

This is from the Orlando Sentinel

Westboro Baptist Church to Use Tucson Massacre to Promote Agenda of Hate
Avinash Mohanani
1:42 p.m. EST, January 9, 2011
DAY #2 OF “THANK GOD FOR THE SHOOTER” – 6 DEAD! WBC WILL PICKET THEIR FUNERALS.

That child was not innocent. This is a nation of depraved perverts who pass their children through the fire of their rage against God & all-consuming lust. From the womb, she was taught to hate God & mock His servants. That child is better off dead, so the cup of her iniquity will not overflow! Rep. Giffords passed laws trying to keep WBC watchers off the street corners. In repayment, God sent the shooter when she took to a street corner! The blood of the 9-year-old is on Rep. Giffords’ hands! This nation rejoiced & your officials were ho-hum when a violent veteran stalked 5 WBC picketers with 90 rounds of ammunition. In repayment, God sent the shooter with 90 rounds of ammunition & killed your federal judge, your child, & others. Now let’s see if you’re so ho-hum in the face of God’s wrath! The blood of these six dead is on your hands rebellious doomed-america! God’s judgments are so righteous & marvelous in our sight!

THANK GOD FOR HIS RIGHTEOUS JUDGMENTS!