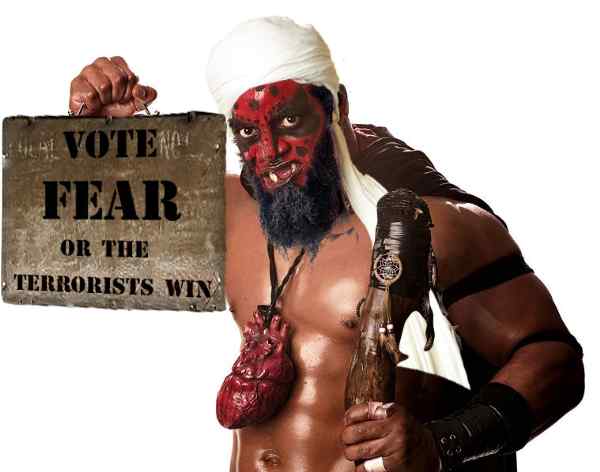 When news of the 2009 Fort Hood Massacre broke, the most tenuous evidence was used to paint the killing as the work of Al Qaeda and other Islamic groups. (Fox)

“The murders at Ft. Hood are about the radicalization of individuals by an extremist ideology — jihadism — which fuels acts of terror,” writes Walid Phares at FoxNews.com’s Fox Forum.

But suggestions that Sarah Palin-Glenn Beck-Michele Bachmann-gun-toting Tea Partiers-Jesse Kelly’s “shoot a fully automatic M16” to “get on target for victory” might constitute a “radicalization of individuals by an extremist ideology” evoke expressed shock and outrage by the neocons.

At the Weekly Standard, for example, are columns on “The Left’s McCarthyism,” “The Arizona Tragedy and the Politics of Blood Libel,” and on and on.

Weekly Standard editor Bill Kristol was on C-SPAN over the weekend comparing criticism of neocon, eliminationist rhetoric to what Kristol says is the absurd suggestion that George W. Bush lied about WMDS. These guys are a laugh a minute.

The point is that there’s room in a democracy for people who ridicule and denounce those who disagree with them; there isn’t any place for eliminationist rhetoric, for suggestions that those on the other side of a debate must be removed from that debate by whatever means necessary.

And it’s the saturation of our political discourse — and especially our airwaves — with eliminationist rhetoric that lies behind the rising tide of violence. …

Where’s that toxic rhetoric coming from? Let’s not make a false pretense of balance: it’s coming, overwhelmingly, from the right. It’s hard to imagine a Democratic member of Congress urging constituents to be “armed and dangerous” without being ostracized; but Representative Michele Bachmann, who did just that, is a rising star in the G.O.P.

And there’s a huge contrast in the media. Listen to Rachel Maddow or Keith Olbermann, and you’ll hear a lot of caustic remarks and mockery aimed at Republicans. But you won’t hear jokes about shooting government officials or beheading a journalist at The Washington Post. Listen to Glenn Beck or Bill O’Reilly, and you will.

Even now, not one GOP-Tea Party extremist will issue even a tame tone-down-the-rhetoric statement. That should tell you rather clearly that they intend to engage in more of the same. But accepting responsibility for the harvest is a different story.

The neocons are going to lose this political battle of terror speech and they know it; but calling for an end to eliminationist rhetoric would be making it a rout. We need to strike at Iran and get everybody back on track and together again.