Home WarZone The Frailty of the Afghan War

As C.S. Lewis says, “We all want progress, but if you’re on the wrong road, progress means doing an about-turn and walking back to the right road; in that case, the man who turns back soonest is the most progressive.” 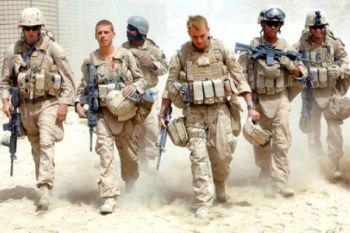 The Obama administration has found “fragile” but “reversible” progress in its one year assessment of the surge of an addition 30,000 U.S. troops to Afghanistan.

In a recent VOA report; NATO has also echoed that coalition forces have made significant progress, but confidential U.N. maps released suggest security has deteriorated in parts of the country in 2010. In addition, a recent National Intelligence Estimate by 16 intelligence agencies also found no progress.

In either case, while the Taliban militancy may be diminished, the looming instability —that threatens the coalition’s sustainable and durable gains enabling responsible drawdown of troops and resources through 2014—, is conditioned on the factors that neither the Obama administration nor the NATO alliance has given assessments. In hindsight, these factors are the root causes for the fragility and reversibility of the progress. Some factors have been cited repetitively overtime, but NATO’S helpless struggle against Afghanistan’s youth bulge is the most burdensome and an inescapable one.

As I recall, in 1979 Afghanistan had a population of 15 million people, but now it has risen to about 34 million. This dynamic of a rapidly growing population has much to do with Afghan cultural norms that foster the idea that indeed it is robustly leveraging the war effort against the coalition. In 1979 there were around 3.5 million Afghan boys younger than 15 when the Soviet Union attacked who were merely getting ready for the fight against foreign occupiers. In 2009 and 2010, the situation had changed. There were 4.2 to 4.4 million—mostly unemployed—Afghan males aged 15 to 29 out of a total population of 34 million. Now there are 6.7 million Afghan boys fewer than 15 who are getting ready for battle. This is because Afghanistan’s women have been averaging three or four sons each. Which means the Afghan demographics is miraculously destined to prevail in a conflict against foreigners with an enhancement of youth population over a set span of time.

Mathematically thinking, 3 percent of 6.7 million is more than the 131,000 NATO troops currently deployed in Afghanistan. Given that factor, and per counterinsurgency doctrine, the numbers indicate that Afghanistan needs as many as 600,000 soldiers and police to maintain the current strategy of counterinsurgency. Hence, the odds for reversal of the stated progress are alarming.

Moreover, there is no doubt that the militants are in their seasonal hibernal phase, making their annual return to Pakistan where they will rest until the fighting season begins again in the following spring. Though a few resistance forces are likely to keep up a hum of violence, it will be nothing like the fighting to regain their thrust at the start of spring.

Of course another factor for the frailty of the war is rampant corruption; in fact, 80 percent of Afghans believe that corruption impacts their lives daily. This is consistent with the view that corruption is preventing the Afghan government from connecting with the people; and remains one of the key root factors supporting the insurgency. Also in consort with corruption, evidence suggests that the inherent weakness of central government institutions in Afghanistan is adding fuel to the insurgent cause.

Similarly, the U.S. Military Review underscores the idea that Pakistan is central to counterinsurgency strategy—although NWSC counters this notion—and that progress with Pakistan to eliminate extremist safe havens is vital. And, the Obama administration is contemplating laying the foundation for a strategic partnership with Pakistan.

Conversely, always-problematic Pakistan’s continuing to drag its feet on suppressing insurgents in its tribal areas does reflect an awkward arrangement. In fact, the tenacity of the Taliban and their ties to Afghanistan’s many Pashtun (and the reality that the Taliban will continue to enjoy a sanctuary in neighboring Pakistan) has immensely heightened their capabilities and operational reach; and has qualitatively expanded their insurgency geographically, adding plentiful funding sources which consequentially is converse to what the U.S. seeks to achieve.

One should not underestimate the conditions given, that in 2001 a victorious West claimed the Taliban was toppled, but on mission they had not been defeated; they simply retreated in the face of superior forces. In fact, employing classic guerilla tactics they simply melted away into other areas, spreading the rebellion into new parts of the country.

Additionally, because Afghanistan also remains hindered in poverty, and with the legitimacy of its graft-ridden, Western-backed government further undermined after two questionable and bizarre elections; both are conditions that created a perfect breeding ground for anti-government insurgency in 2010. Moreover, there is finally an understanding that, any insurgents who enjoy the support of the population can always bounce back.

Today many Afghans perceive ISAF as an occupying force and no longer part of the solution; they have become part of the problem. Also, the average Afghan population has difficulties absorbing the vague and shifting references akin to, “NATO alliance doesn’t have an exit strategy, but has a transition strategy,” or, “U.S. commitment to Afghanistan is continuing, enduring and long-lasting,” or, “any troop reduction then would be responsible and conditions-based,” and, “This is not a war of choice. This is a war of necessity”. Afghans can plainly see all these statements as signs of ill-progress.

Therefore as initially stated, the U.S. is on the wrong road, and it should do an about-turn and walk back to the right road; in that case, she/he who turns back soonest is the most progressive.

Khalil Nouri coauthor of Afghanistan National Recociliation is the cofounder of New World Strategies Coalition Inc www.nwscinc.org, a native think tank for a nonmilitary solution studies for Afghanistan, and a member of Afghanistan Study Group www.afghanistanstudygroup.org