P.T.S.D These are letters that a lot of people right now are throwing around as if they know what they are talking about !!!!!!!!!!! News Flash !!!!!!!!!! THEY DON’T !!!!!!!!!!! A lot of people are using these letters and they have no idea what they even mean, other than just saying Post Traumatic Stress Disorder. They use them for ratings, for attention, for sympathy, and for manipulation. This includes the so called experts on the subject.

First of all (Post )as in, after : subsequent : later after : subsequent : later, is just that POST!!!. The damage has been done, the events have taken place, the Trauma is setting, or has set in. (Trauma), as in an injury (as a wound) to living tissue caused by an extrinsic agent, a disordered psychic or behavioral state resulting from severe mental or emotional stress or physical injury. Disordered as in, morally reprehensible, or unruly. (Stress) as in, constraining force or influence:, as, a state resulting from a stress; especially : one of bodily or mental tension resulting from factors that tend to alter an existent equilibrium. These three, (Post, Trauma, Stress) go together and all happen at about the same time whether known or not. However DISORDER IS NOT PART OF THE INITIAL EQUATION!!!!! This part of the equation can only happen if the “Trauma” and the “Stress” is not treated quickly and properly. Properly means !!!!!!!!!!NOT CLINICALLY!!!!!!!!! This makes the D in P.T.S.D very questionable.

Doctors take your stethoscopes out of your ears and listen to the patient. Stop trying to TELL them what they need and listen to WHAT they need. The medical attitude of today is appalling to say the least. Doctors are about fifty years behind the times stuck in their old, “well that oughta work” attitude, as well as categorical treatments that just do not work. This is just not acceptable in todays world. Wake up “Doc” and get with it. 500,000 homeless Vets are a testament to your inabilities to administer effective treatment.

Old cliché – ( you can take twelve people, line them up on the same beach at the same time to watch the same sun set, then ask each one to describe that setting. Although they all saw the same event , each will come back with a different description of observation.) Why is this ??? This discrepancy exists because each individual is unique in the way that experience is divulged. As well as how the experience is recalled. So is each individual born with a unique cache of “Set Points”? These set points are what will determine how the individual will handle “Traumatic Stress”. Each one will be different for each person and each event that takes place. Even though the same event may take place with two or more persons each will be affected to a different degree. As this is so, so is the treatment required to avert any kind of disorder. (Disorder), as in to disturb the order of, to disturb the regular or normal functions of, Although traumatic stress has a grave and immediate effect on the person it does not mean that it has to lead to disorder. Again this can only happen if it is allowed to manifest beyond the point of traumatic stress. Implementation of pre-deployment tactics on how best to handle “Traumatic Stress” is in order now if we are going to send our “Boys and Girls’ into harsh situation such as we have now.

Military world needs to wake up to these facts. Maybe a civil action lawsuit against the military for damaging our natural human resources will wake up these MO-FOS . In the mean time it is up to the citizens of the “free world” to do everything they can to help soldiers who can no longer help themselves. Citizens you now have a duty call to this cause of assistance. Now is the time to stand up and count for your countrymen and women who have given all for a cause that even they did not fully understand. Now is the time for you to “DO” instead of saying “coulda, shoulda, woulda”. Step up now before it is to late for YOU!!!!!!!!

A small child begins to cry. The reason – in its mind a perceived traumatic event is unfolding, ie: a threat, a domestic quarrel, a theft of a possession by another. As the event unfolds if left alone the trauma begins to weigh on the child. Left alone this child will cry at a high rate of energy until it is exhausted, and the child becomes slowly tired. This will then become a whimper until the child falls asleep and can rejuvenate energy. As the trauma has set in so to without guidance is the disorder. Disorder becomes relevant because of lack of understanding as to what has happened, and how to handle this event. However come to the aid of this child with comfort, assurance, and explanation as to the cause, effect, and outcome of this event you will find a child that will quickly recover from the Traumatic Stressful event. He or she will take deep breaths, quivering and exhaling until a broad smile finally replaces the scowling frown and tears, therefore eliminating and correcting any type of disorder that may otherwise become debilitating to this child. This is called proper care and nurturing of the fragile soul.

Do we ever really lose the child within us?? No! The child just becomes a grown up with a much heavier burden placed upon the child within. Why do you suppose it is called “Playing in the Sandbox”

This scenario is in no way a comparison to the trauma and stress placed upon our troops in combat, this is a simple explanation to better understand the effects of, and the possible corrections for Traumatic Stress before it becomes Disorder. 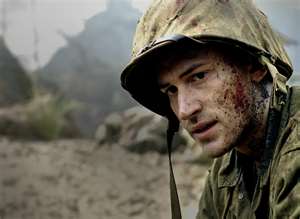