Home Life The Shock And Awe Of Children And War 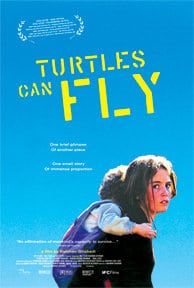 Writer director Bahmand Ghobadi’s brilliant movie Turtles Can Fly truly captures the shock of the true casualties of war, the wounded and maimed innocent children,as well as the awe of their survival skills and innate desire to help and support each other

A few days ago, a clerk at a local video store handed me a DVD of Turtles Can Fly and said she thought I might like it. I don’t argue with fate or the unknown, for that matter, so I rented it with the intention of watching it the same night.

She was right ~ this movie is a timely and heart-wrenching story about children struggling to survive in an endless war zone on the Iraqi-Turkish border a few weeks before the US illegal preemptive invasion and occupation of Iraq. But this story could just as well have been in Afghanistan, Palestine or any other occupied war zone ~ where civilians or children are treated as collateral damage and must survive by any means possible.

The Film depicts the every day life of these war orphans who are forgotten by the world but try to survive every day to the best their ability. Many of their bodies are torn apart by mine fields or cluster bombs ~ planted by the US and other countries who participate in this deadly war game. The children harvest mines and weapons daily and sell them in order to survive. This is a universal story of innocent children who are greatly affected by the ignorance and selfishness of political leaders with their own agendas ~ but somehow muster the courage to survive and resist by relying on their innate propensity to unite and cooperate with each other.

Thomas Mann said “Tolerance becomes a crime when applied to evil “ and after watching this film ~ I am more convinced that ever that I have no more tolerance for our evil and illegal preemptive invasions and occupations of both Iraq and Afghanistan and the countless innocent children and civilians that have been killed or permanently maimed in the process.

Jimmy Carter said the same thing ~ “War may sometimes be a necessary evil. But no matter how necessary, it is always an evil, never a good. We will not learn how to live together in peace by killing each other’s children.”

It also leads me to the same feelings of the late Howard Zinn, who wrote in his 1994 memoir ( You Can’t Be Neutral On A Moving Train ) “From that moment on, I was no longer a liberal, a believer in the self-correcting character of American democracy. I was a radical, believing that something fundamental was wrong in this country – not just the existence of poverty amidst great wealth, not just the horrible treatment of black people, but something rotten at the root. The situation required not just a new president or new laws, but an uprooting of the old order, the introduction of a new kind of society – cooperative, peaceful, egalitarian.”

Here’s the storyline ~ Set in Ghobadi’s native Kurdistan, close to the Turkey-Iran border. Soran is a 13-year-old boy who orders other children around as he installs an antenna for villagers keen to hear of Saddam’s fall. Eventually, he falls for Agrin but is disturbed by her brother Henkov, who was left armless after he stepped on a landmine and who can now seemingly predict the future. Agrin, who was assaulted and raped by soldiers, is hauntingly tiptoeing on the edge of survival as she cares for her bastard child but can’t escape her traumatic memories and thoughts of suicide.

All are heroic in their own way and all are, in real life, villagers and refugees in that area who are engaged in a cooperative, peaceful and egalitarian society of their own making.

About the Author: Allen L Roland is a Freelance Alternative Press Online columnist and psychotherapist. He is a practicing psychotherapist, author and lecturer who also shares a daily political and social commentary on his web site at AllenRoland.com. He also guest hosts a Truthtalk, a national radio show that airs monthly. He is available for comments, interviews, speaking engagements and private consultations via email at [email protected].