Home World ARABS KEEP OUT! ISRAEL LAYS CLAIM TO ALL THE RESOURCES

ED NOTE:  “Oil in Palestine?”  Well, what else has all of this been about?  And, why have the Israelis claimed jurisdiction over so much of that sea over there?  They don’t even allow Palestinians to fish in it. 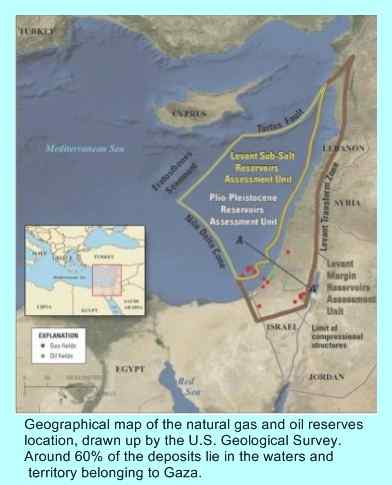 For years, various companies have been exploring the hydrocarbon deposits in the Levantine Basin, but only a handful of political and economic leaders were privy to the size of the prize. On 29 December 2010, the Israeli authorities gave Noble Energy Inc. the green light to release the news. The communication, announcing that exploitation was taking off after a political freeze, has been coupled with a diplomatic campaign to allow Tel Aviv to siphon off all the reserves to the detriment of the other coastline states.

This accounts for only a small part of the energy reserves abounding in the Levantine basin, which comprises Israel, the Palestinian territories, Lebanon and their territorial waters. According to U.S. Geological Survey, a U.S. Government agency which has been prospecting in the region for several years, the natural gas deposits in the basin consist of approximately 3 500 billion cubic meters, while the oil reserves have been assessed at 1,7 billion barrels.

The Israeli government, with Washington’s backing, considers it is entitled to all the energy reserves. Israeli national infrastructure minister Uzi Landau declared that the large natural gas fields would not only bring economic benefits to Israeli citizens but could also transform Israel into a gas supplier in the Mediterranean region. However, objected Speaker of the Lebanese Parliament Nabih Berri, Israel is disregarding the fact that according to the maps the fields stretch into Lebanese territorial waters. The United Nations Convention stipulates that a coastal state may exploit offshore gas and oil reserves within a zone extending 200 nautical miles (370 kilometers) from the shore.

Two wells, Gaza Marine-1 and Gaza Marine-2 are ready but not operational. In fact, Tel Aviv has systematically rebuffed all the proposals from the Palestinian Authority and the consortium to export gas to Israel and Egypt. Therefore, the Palestinians possess vast riches which they are unable to exploit.

To seize the totality of the energy reserves – both Palestinian and Lebanese – bathing in the Levantine Basin, Israel has chosen the military option. The Lebanese Foreign Affairs Minister Ali al-Shami recently urged the UN Secretary General to prevent Israel from exploiting the offshore energy reserves located in Lebanese territorial waters. Minister Uzi Landau claimed instead that the reserves are in Israeli waters and warned that his country will not think twice about employing force to protect them. Israel has therefore threatened to attack Lebanon again, like it did in 2006, with the intention this time of impeding it from exploiting its offshore deposits [3].

It is for the same reason that Israel does not accept a Palestinian state. To do so would imply the recognition of Palestinian sovereignty over a large portion of the energy reserves, which Israel wants to grab. It was to this end that the 2008-2009 “Cast Lead Operation” was launched and Gaza caught in the clutches of the blockade. Meanwhile, Israeli war ships control the whole of the Levantine Basin – and hence the offshore oil and gas reserves – within the framework of the NATO-sponsored “Mediterranean Dialogue” to “contribute to the security and stability of the region.