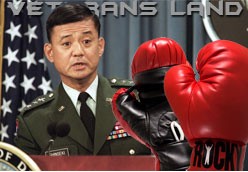 WHY IS GENERAL SHENSEKI UNABLE TO REMOVE CRIMINALS FROM THE VA?

By Gordon Duff  for VT

Last year, Robert Rosebrock, advocate for homeless veterans and VT staffer, was arrested in Los Angeles on a series of Federal charges.  Rosebrock was accused of violating convoluted interpretations of imaginary Federal statutes on days and in places where he was clearly some place else. Mysteriously, the charges were dismissed just prior to trial in the US District Court in Los Angeles.

Now the ACLU is suing the Department of Veterans Affairs over Constitutional abuses tied to them.  However, something disturbing has been brought to the surface.  The VA police force responsible for the arrest, now has submitted statements saying they were ordered to fabricate evidence and commit perjury, part of a conspiracy tying VA officials into a “land grab” scheme with local developers with reputed ties to Detroit based crime families. 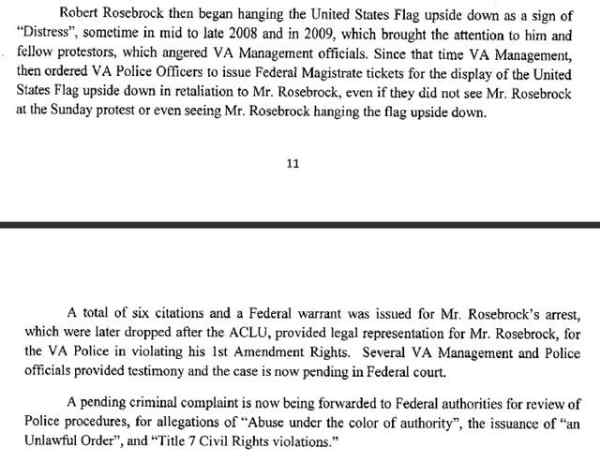 For three years, there have been demonstrations every week, sometimes only a few aging veterans but often participants as diverse as Rees Lloyd, American Legion attorney who led the fight for the Mojave Cross and Daniel Overmyer, billionaire, World War II veteran and founder of several major banking houses. The issue?  Land, given to the veterans after the Civil War, land then nearly worthless, now worth billions, land being “picked apart” by powerful groups while the areas 20,000 homeless veterans are excluded, often by the application of unrestrained and unauthorized use of police resources, a suspicious circumstance now confirmed by written testimony from officers involved.

Those seizing the land are a cabal of the rich, the powerful, not just powerful developers but bankers, insurance industry executives and members of congress.  Disguised as “beautification committees” and questionable patriotic groups, their goal is simple:

THE BUCK STOPS HERE General Shensiki, a man with a reputation for backbone and integrity, took over the Department of Veterans Affairs in 2009.  General Peake has been put in by President Bush to quiet criticism after a series of scandals during the Nicholson regime, ending in late 2007.  Nicholson’s tenure at the VA had been a disaster with the VA cutting services and taking the position that the guarantees America had given its veterans were no longer in force.

Nicholson saw veteran’s benefits as entitlements, not rights, and enforced Bush administration policies that sought to cut benefits for veterans in order to underwrite lower taxes for those in top earnings brackets.  The result of these policies has been thousands of veteran suicides, a total crash in military moral and effectiveness and the collapse of the American economy in a sea of debt. When General Shinseki was confirmed by congress, the VA had a backlog of a million claims, some in processing for 25 years.

Veterans funding had been gutted during wartime, an act of insanity in itself, with key functions “outsourced” to religious groups shown to be unsympathetic to the plight of America’s veterans.  Veterans needing help were pegged as “losers” and “frauds,” some even prosecuted simply for seeking benefits or speaking out about abuses. Some were even “railroaded” into prison for exposing policies that victimized veterans. The traditional service organizations had, by that time, either diminished in influence or gotten sidetracked by partisan issues, either way, their important advisory role had become, by then as it is now, unfilled.

With hundreds of thousands of veterans returning from two brutal wars, the situation General Shinseki inherited was a potential recipe for disaster.  Now a new problem has arisen, Shinseki himself is too trusting, too polite and too “out of touch” to deal with the corrupt bureaucracy that has undermined every policy reform he has tried to enact. Emboldened by Shinseki’s lack of, not really leadership, but needed retaliation, the “war” within the DVA itself that was needed to remove 8 years of corruption, some things have actually gotten worse.

The use of VA police as spies, as thugs, now as mercenaries for private developers, even criminal organizations, is a real possibility, one we have seen evidence of in Los Angeles. It was one thing when the veterans, not just the homeless but the activists working to help them were the victims, but now it has become clear that the DVA police, mostly veterans themselves, have been systematically victimized also.

Many months ago, the FBI in Los Angeles was given evidence of systematic criminal activity, including financial fraud involving the West Los Angeles Veterans Facility.  Statements by VA police and others outline systematic corruption of every kind, from financial fraud to a variety of conspiracies, a pattern of actions that totally undermine faith in the Department of Veterans Affairs. Failure by law enforcement authorities to act further undermines faith in our criminal justice system, especially when the criminal complaints originate from sworn Federal officers themselves.

THE ANSWER IS SIMPLE

Secretary Shenseki must do what is necessary to restore confidence in the Department of Veterans Affairs.  All top management at the Los Angeles Regional Center must be replaced immediately, there is no question about that. Only then can the needs of veterans begin to be addressed instead of ignored.  Veterans have been treated as, not heroes, not patients, not even citizens, but as the “enemy.” The vast majority of DVA employees in West Los Angeles are both capable and loyal.  However, there is no way they can do the work they are paid for, the work they should be able to take pride in, the work we know they want to do, unless they are free to work in a professional atmosphere and with competent and honest leadership. That competent and honest leadership must immediately be restored.