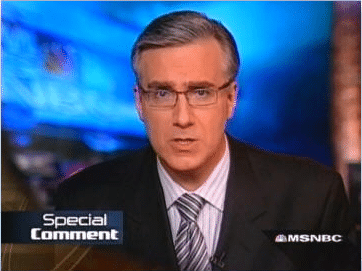 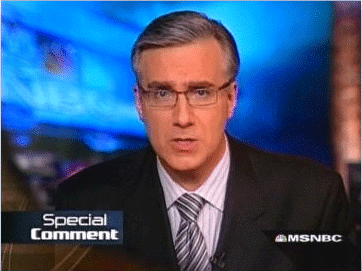 The stage has been set ~  truth and dissent will be slowly marginalized until we accept and realize that the world is a business, its lifeblood is profits and it answers to no one except its stockholders: Allen L Roland

MSNBC’s parent company, General Electric, never seemed comfortable with Keith Olbermann’s role as a critic of the Bush administration, nor, for that matter, of the Obama administration or with the sniping between Olbermann and his Fox News rival, O’Reilly ~ so the axe finally fell on Countdown.

Keith Olbermann spelled it out in his last show on MSNBC saying “I think the same fantasy popped into the head of everybody in my business that has ever been told what I have been told ~ this will be the last edition of your show.  You go to the scene from the movie Network, complete with the pajamas and the raincoat and go off on a verbal journey of unutterable vision, and you insist upon Peter Finch’s guttural resonance, and you will the viewer to go to the window, open it, stick out his head and yell ~‘I’M MAD AS HELL, AND I’M NOT GOING TO TAKE THIS ANYMORE!!”

But what Keith did not refer to was Mr. Jensen’s speech to Howard Beale from the same movie Network when Jensen told Beale the facts of life about the corpocracy and that the world is a business whose lifeblood is profits ~ regardless of their moral or ethical costs.

So I have taken the liberty to edit Paddy Chayefsky’s brilliant script of that scene with Mr. Olbermann playing the part of Howard Beale when he and Mr. Jensen meet alone in the dimly lit  MSNBC boardroom.

Jensen: You have meddled with the primal forces of nature, Mr. Olbermann, and I won’t have it, is that clear?! The Arabs have taken billions of dollars out of this country, and now they must put it back and we are preemptively forcing them to do that. It’s not about human rights and Democracy ~ the world is a business, Mr Olbermann ~ it’s all about profits!

There is only one holistic system of systems, one vast and innate, interwoven, interacting, multi-variate, multi-national dominion of dollars! petro-dollars, electro-dollars, multi-dollars!, Euro dollars, Reichmarks, rubles, rin, pounds and shekels! It is the international system of currency that determines the totality of life on this planet! That is the natural order of things today! That is the atomic, subatomic and galactic structure of things today! And you have meddled with the primal forces of nature, and you will atone! ~ Am I getting through to you, Mr.Olbermann? (pause)

You get up on your fifty-one inch screen, and howl about America, democracy and moral integrity but it will do no good ~ no one is really listening. There is no America, Mr Olbermann ! There is no democracy. There is only IBM and AT&T and Dupont, Dow, JP Morgan, Exxon, British Petroleum and of course General Electric and Comcast. Those are the nations of the world today. What do you think the Russians talk about in their councils of state ~ Karl Marx? They pull out their linear programming charts, statistical decision theories and compute the price-cost probabilities of their transactions and investments just like we do with our derivative high speed trading! We control the world and we mean to keep it that way, Mr Olbermann!

The Stock market has no sympathy for you, your family or your emotions, Mr. Olbermann. It  desires one thing only ~ profits. And those profits will often come at the expense of everything many wish for in this world but that’s considered collateral damage.

Why do you think we created the World Bank, it’s really quite simple, Mr Olbermann. The World Bank’s analytical framework is used to justify a process of “economic repression”, which has been applied Worldwide in more than 150 developing countries. For example, the World Bank is actively involved now in cooking the data and distorting the social plight of the Tunisian population. The official rate of unemployment is 14 percent, the actual level of unemployment is much higher. Recorded youth unemployment is of the order of 30 percent. Social services, including health and education have collapsed under the brunt of the IMF-World Bank economic austerity measures. What is happening in Tunisia, Mr Olbermann ~ is part of a global economic process which destroys people’s lives through the deliberate manipulation of market forces and all in the name of profits !

Tony Blair gets it , Mr Olbermann ~  it’s all about protecting our way of life ( chuckle ) Every time he says those words ~ the same words he used to justify our preemptive attack on Iraq ~ I get shivers of delight running up my spine. He’s our man in the Middle East.

Cheney and Bush not only got it, they accelerated it ~ bless their hearts ~ particularly Cheney’s crippled one ( sigh )

Obama gets it, too! Obama answers to the corpocracy, Mr. Olbermann ~ not to the American people ( chuckle ). He made his deal with the devil before he was elected and promised not to prosecute Cheney and Bush for war and financial crimes in turn for not rocking the boat with Wall Street. Why do you think we chose JP Morgan’s William Daly as his new chief of staff as well as his recent appointment of General Electric CEO Jeff Immelt as the head of the President’s Council on Jobs and Competitiveness ( Chuckle ) ~ they are his constant reminder that he answers to the financial elite on Wall Street and not Main Street ~ as Emanuel was most certainly his reminder not to cross AIPAC.

We’re heading for a New World Order, Mr. Olbermann, and guess whose going to be funding it ~ an unaudited federal reserve who will bail out our excesses as they did under Bush and Obama. It may not seem fair, Mr. Olbermann but its business and that’s how the game is played.

We no longer live in a world of nations and ideologies, Mr. Olbermann. The world is a college of corporations, inexorably determined by the immutable by-laws of business. The world is a business, Mr. Olbermann! It has been since man crawled out of the slime, and our children, Mr.Olbermann, will live to see that perfect world in which there is no war and famine, oppression and brutality ~ one vast and ecumenical holding company, for whom all men will work to serve a common profit, in which all men will hold a share of stock, all necessities provided, all anxieties tranquilized, all boredom amused.  And I chose you to preach this evangel, Mr.Olbermann, and you have obviously failed !

Jensen: Because you’re on television, dummy. One million people watch you every night of the week, Monday through Friday ~ and you’re starting to tell the truth and that makes us very, very nervous. Phil Donahue, who preceded you, made the same mistake by telling the truth in the run-up to the Iraq war and we felt he was a very difficult face for NBC in a time of war ~ so we fired him!  Truth tellers scare us, Mr. Olbermann ~ it’s important for us to keep the public tranquilized and amused but not necessarily well informed. The world is a business, Mr. Olbermann ~ your truth talk is not serving us ~ you’re fired!

Let those words sink in because our Republic is in peril and we still most assuredly need progressive truth tellers and dissenters like Keith Olbermann. The late George Carlin was another and here’s his appropriate 5 minute American Dream.

ABOUT THE AUTHOR:   Allen L Roland is Freelance Alternative Press Online columnist and psychotherapist.  He is also available for comments, interviews, speaking engagements and private consultations  Allen L Roland is a practicing psychotherapist, author and lecturer who also shares a daily political and social commentary on his weblog and website www.allenroland.com . He also guest hosts a monthly national radio show TRUTHTALK on www.conscioustalk.net