Home Veterans IVAW Says President Showed He Is out of Touch with Iraq and... 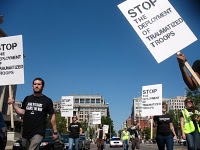 President Obama’s State of the Union Address showed the president is out of touch with the rough reality facing veterans, and failed to produce a plan to address their needs. Iraq Veterans Against the War (IVAW) represents the voices of Iraq and Afghanistan veterans with bold solutions to cut the human and financial costs of war by meeting veterans’ needs that the president ignored. The president must listen to veteran’s voices to help heal the nation.

President Obama’s State of the Union Address last night praised the service of men and women in uniform, and promised veterans the treatment they need. But the speech showed the president is out of touch with the rough reality facing veterans, and failed to produce a plan to address their needs. Iraq Veterans Against the War (IVAW) represents the voices of Iraq and Afghanistan veterans with bold solutions to cut the human and financial costs of war by meeting veterans’ needs that the president ignored.

President Obama grossly understated the heavy toll that the Afghanistan and Iraq wars are baring on troops and the economy. The Afghanistan War is now the longest war in U.S. history. Military healthcare costs are rising at twice the rate of the national average and occupy a major chunk of the Pentagon budget (USA Today 4/25/10). 2009 was the first year since recordkeeping began that mental health disorders were the major cause of hospitalization (USA Today 5/16/10), a grim symbol of compounding trauma. Obama declared in his speech that veterans are returning home “with heads held high,” a fable not reflected in the record suicide rates.

“President Obama, do you really think we are holding our heads high as we are watching our brothers and sisters suffer and commit suicide because they aren’t getting the care they deserve? Troops need more than a long pause for applause, they need to be treated like humans,” said Maggie Martin of IVAW, two-time Iraq veteran.

Veterans of IVAW are currently leading a campaign, Operation Recovery, launched in October to end the military’s widespread practice of deploying traumatized troops back into battle. By heeding their call the President would back his promise of cutting healthcare costs. He would lower unemployment for veterans and help begin a process of national healing.

“Soldiers are being forced to redeploy into combat without receiving treatment for wounds suffered during previous combat tours. Military Sexual Trauma, Post Traumatic Stress Disorder, and Traumatic Brain Injury are spiraling out of control as a result, with unacceptable human and financial costs,” said Jose Vasquez, who served 14 years in the United States Army and is now the Executive Director of Iraq Veterans Against the War.

Unemployment is another high cost of multiple redeployments and inadequate care. A January report released by the Bureau of Labor statistics shows recent veterans have an almost 12% unemployment rate — 2.3% higher than the national average. Mental and physical wounds suffered during combat make it more difficult for veterans to find jobs or start their own businesses.

“The president said withdrawal from Afghanistan will start in July, but when will it end? Let’s bring all the troops home immediately and invest in the care they have earned,” said Zach Choate, Afghanistan War veteran and IVAW member.