The unfolding of events after 9/11 had a direct affect on Pakistan and the region. An increase in terrorist attacks in 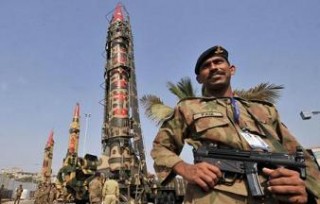 Pakistan and Afghanistan resulted in increase in the number of civilian casualties, pushing South Asia past the Middle East as the top terror region in the world. The War on Terrorism had a major impact on Pakistan, when terrorism inside Pakistan increased many folds. Thousands of civilians – overwhelmingly Muslim – were killed in extremist attacks, contributing to the instability of the unstable, poverty-stricken governments in the region, the statistics show a progressive increase in Extremist activities starting from 2006 and sudden decline in past one year or so. We live in world of perceptions where media plays an important role in creating an atmosphere far from facts. Powers controlling media mould hearts and minds of target audience by grilling with the intended items. As a result mind forgets the facts and start following the media perceptions.

In 2006, 30 terrorist attacks, including 10 of a sectarian nature, took place, leaving 100 people dead and 230 others injured. In 2007, 34 terrorist attacks and clashes, including suicide attacks, killings, and assassinations, resulted in 134 casualties and 245 injuries, according to the PIPS security report  Pakistan faced 20 suicide attacks (mostly targeted at security forces) during 2007, at least 111 were killed, besides injuring another 234 people. A visible increase in suicide attacks after Lal Masjid operation was seen all over the country.  Pakistan’s Taliban seized control of Swat and challenged the writ of the government out side FATA in 2009. The Talibans further increased their influence towards a district in the country’s northwest just 70 miles from the capital  after consolidating their hold on the Swat Valley. . The picture, was so bleak that at one point the ANP-led coalition government seriously considered to relocate its provincial capital from Peshawar to the northern city of Abbottabad. Peshawar was virtually under siege from three sides, Darra Adamkhel to the south, Mohmand tribal region to the north and Khyber Agency`s Bara sub-district to the west.

The U.S. Secretary of State Hillary Clinton said in testimony before a House committee that the Taliban advance poses “an existential threat” to Pakistan and urged Pakistanis world-wide to oppose a government policy yielding to them. Pakistanis “need to speak out forcefully against a policy that is ceding more and more territory to the insurgents”. In Pakistan, more than 8,600 were killed and wounded in 2009, a 30 percent jump from previous year. Overall, the number of terror attacks in Pakistan rose from about 1,800 in 2008 to more than 1,900 attacks in 2009. Suicide bombings more than doubled between 2007 and 2009, jumping from 40 to 84. The suicide attacks not only paralysed govt functionary but also restricted move of law enforcing agencies and security forces in major cities.

However, government’s decision and push of Pakistan army under General Kayani  into the Federally Administered Tribal Areas and the Swat Valley  put  pressure on the insurgents toward the end of the year, tamping down militant activity and forcing them to relocate. The success of  Swat operation and settlement of displaced people of Swat became role model for the society and the environment was shaped in favour of government and the army.

The military pressure dislodged the (terror) groups from some of their training areas and kept them on the run. The violence fell by 60 percent in the second half of 2009, compared with the first half. At the same time, the U.S. also targeted the border region by dramatically increasing its classified program of drone attacks, largely conducted by the CIA. As a result, the overall increase in Pakistan violence was less than initially expected during the more turbulent first half of the year.

The arrest and killing of hundreds of suspected TTP militants, improved policing in KP, stepped-up air strikes in North Waziristan and pressure on Taliban hideouts in Orakzai and South Waziristan helped drain militant strength, The  neutralisation of suicide bombing ability of the militants gave the security forces an added edge to wipe out the remaining Taliban. Some police officials claim that the change in the kind of crimes shows that the situation is moving back to normal. Kidnappings top the crime chart in 2010 with 547 cases, including 133 of kidnapping for ransom, as compared to 530 in 2009, including 158 for ransom. But the major achievement is that a threat of the Taliban marching on to Peshawar has been neutralised. Swat and Buner to the north of Peshawar had been overrun by Taliban who had also made gains in the Upper and Lower Dir and Shangla districts have been reversed.

Charsadda, Mardan, Swabi and Nowshera had come under increasing pressure from militants bombing CD shops and salons. To the south, Hangu there was an increase in sectarian violence, Kohat came under attack from neighbouring Darra Adamkhel which was under the control of a militant group affiliated with the Tehrik-i-Taliban and the situation in Lakki Marwat and Tank was also bad. Dera Ismail Khan had seen a surge in sectarian violence. Militants had complete control in South Waziristan, Bajaur, Mohmand, Orakzai and a major part of the Khyber region in the Federally Administered Tribal Areas (Fata). Kurram tribal region had gone under the Taliban writ. Bringing them back under government’s writ is by no means a small success. Fata officials claim that the government`s writ has been restored in nearly 70 per cent of the region. “It was grim and grave, but the environment has started changing,” a senior security official said.“There are no no-go areas in the province, the writ of the state has been established throughout the province. There is no parallel administration anywhere.”

The official mind set on nuclear issues has also changed. In May 2009, Admiral Mike Mullen stated in press conference at Pentagon “We all recognize, obviously, the worst downside with respect to Pakistan is that those nuclear weapons come under the control of terrorists.” Now the wind has changed, US Secretary of State Hillary Clinton believes that “the nuclear arsenal that Pakistan has, I believe, is secure. I think the government and the military have taken adequate steps to protect that,”. In same context, Indian Army Chief Gen VK Singh affirms, “I don’t think, there is any reason to say things are not secure. Things are secure.” However, interested parties keep projecting dismal picture about Pakistan.

Decrease in terrorist attacks through out the country and on law-enforcing agencies is a visible sign of improving law and order situation. The militants, after losing ground, have also changed tactics and are now relying more on roadside bombings, rocket and mortar attacks, ambushes and kidnappings for ransom. The number of militant attacks on police stations intelligence agency and security forces has also dropped. The change in suicide techniques and use of woman suicide bomber in tribal culture speaks of pressure on militants. A recent security report from the Pak Institute for Peace Studies (PIPS) said the number of violent incidents and terror attacks in Pakistan fell by 11 per cent during 2010, compared to 2009. The number of suicide attacks fell by 22 per cent to 68 in 2010, compared with 87 last year.

The brightness of the prosperous future seem evident under close mutual struggle and sacrifices of political and military leadership.  Political ownership of the military operations has given strength to the government’s success against militancy. If the military continues to assert itself and the civilian government supplements the military job with better governance, the normalcy in security environment and boost in economic activity is not very far.