Veterans Today (VT) issued a statement of support for the Open Letter by 400 Rabbis charging Beck with diminishing “the memory and meaning of the Holocaust when you use it to discredit any individual or organization you disagree with.”

VT said: Glenn Beck has long demonstrated himself a clown not be taken seriously. But when his asinine commentary is directed at one man in this deplorable effort at demonization we have seen the results from unhinged lone wolves both recently and in history. 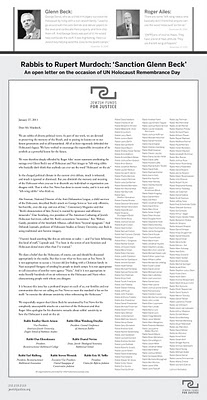 From AlterNet—A group of hundreds of rabbis, from all the major denominations of religious Judaism, have had enough of the constant cry of “Nazis” from creepy Glenn Beck, whose recent programs have veered dangerously close to Anti-Semitism. Recently, he made particularly disgusting comments about George Soros, who survived the Holocaust as a child by hiding with a non-Jewish family. They’re also none too pleased with Fox News chief Roger Ailes for his dismissive dig at “left-wing rabbis” who objected to Beck.

So they’re going straight to the boss, Rupert Murdoch, by placing a massive full-page ad criticizing Beck’s words in the Murdoch-owned WSJ. The ad ran on Thursday. It is posted below in text format:

Glenn Beck:
George Soros, who as a child in Hungary survived the Holocaust by living with a non-Jewish family “used to go around with this anti-Semite and deliver papers to the Jews and confiscate their property and then ship them off. And George Soros was part of it. He would help confiscate the stuff. It was frightening. Here’s a Jewish boy helping send the Jews to the death camps.”
November 11, 2010

Roger Ailes:
There are some “left-wing rabbis who basically don’t think that anyone can use the word ‘Holocaust’ on the air.”
November 16, 2010

January 27, 2011 Dear Mr. Murdoch, We are rabbis of diverse political views. As part of our work, we are devoted to preserving the memory of the Shoah, and to passing its lessons on to our future generations and to all humankind. All of us have vigorously defended the Holocaust’s legacy. We have worked to encourage the responsible invocation of its symbols as a powerful lesson for the future. We were therefore deeply offended by Roger Ailes’ recent statement attributing the outrage over Glenn Beck’s use of Holocaust and Nazi images to “left-wing rabbis who basically don’t think that anybody can ever use the word ‘Holocaust’ on the air.” In the charged political climate in the current civic debate, much is tolerated, and much is ignored or dismissed. But you diminish the memory and meaning of the Holocaust when you use it to discredit any individual or organization you disagree with. That is what Fox News has done in recent weeks, and it is not only “left-wing rabbis” who think so. Abe Foxman, National Director of the Anti-Defamation League, a child survivor of the Holocaust, described Beck’s attack on George Soros as “not only offensive, but horrific, over-the-top, and out-of-line.” Commentary Magazine said that “Beck’s denunciation of him [Soros] is marred by ignorance and offensive innuendo.” Elan Steinberg, vice president of The American Gathering of Jewish Holocaust Survivors, called Mr. Beck’s accusations “monstrous.” Rev. Welton Gaddy, president of the Interfaith Alliance, called them “beyond repugnant.” And Deborah Lipstadt, professor of Holocaust Studies at Emory University, says Beck is using traditional anti-Semitic imagery. “I haven’t heard anything like this on television or radio — and I’ve been following this kind of stuff,” Lipstadt said. “I’ve been in the sewers of anti-Semitism and Holocaust denial more often than I’ve wanted.” We share a belief that the Holocaust, of course, can and should be discussed appropriately in the media. But that is not what we have seen at Fox News. It is not appropriate to accuse a 14-year-old Jew hiding with a Christian family in Nazi-occupied Hungary of sending his people to death camps. It is not appropriate to call executives of another news agency “Nazis.” And it is not appropriate to make literally hundreds of on-air references to the Holocaust and Nazis when characterizing people with whom you disagree. It is because this issue has a profound impact on each of us, our families and our communities that we are calling on Fox News to meet the standard it has set for itself: “to exercise the ultimate sensitivity when referencing the Holocaust.” We respectfully request that Glenn Beck be sanctioned by Fox News for his completely unacceptable attacks on a survivor of the Holocaust and that Roger Ailes apologize for his dismissive remarks about rabbis’ sensitivity to how the Holocaust is used on the air. Rabbi Bradley Shavit Artson
Vice President, American Jewish University, Ziegler School of Rabbinic Studies

All organizations are listed for informational purposes only.