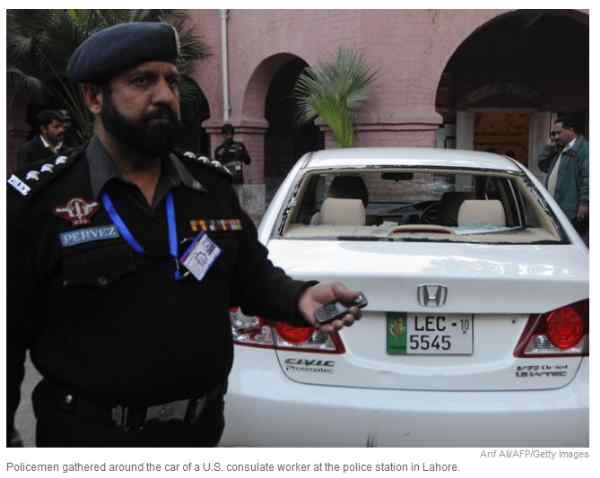 TIES BETWEEN US CONTRACTORS, PAKISTANI OFFICIALS AND TERRORISTS ALLEGED

UPDATES:  Confirmed, individual claimed to be diplomat was a contractor who is now remanded to police custody facing possible charges for terrorism and murder.  No diplomatic privilege or immunity applies, statements by US Consulate false.

License plate on car was fake and bullet holes in the car were from shots fired from inside the vehicle believed part of an attempt to mislead investigative authorities.

A Deputy Superintendent of Police has been accused by witnesses at the scene of planting weapons on the victims.  An investigation has been requested by local television.

An American “technical advisor” named Raymond Davis, is in police custody in Lahore, Pakistan after a bizarre incident that led to the death of three Pakistanis, one a pedestrian killed in a motor accident and two witness/bystanders killed by gunfire.

According to the Pakistani government, Davis has been in and out of the country 9 times in 18 months, mostly to Afghanistan.

Davis, driving a rented car with phony license plates, loaded with automatic weapons and advanced Israeli built surveillance gear, was heading toward Mozang Chongi, a market district in Lahore that has been the scene of terror bombings in the past, bombings local residents suspect American contractors such as Davis have had a role in.

Local residents are flooding the streets at reports that Davis is going to be released and sent back to the United States.

Witnesses claim that Davis struck and killed a cyclist, Ibadur Rahman, a local trader and attempted to flee the scene in heavy traffic. Two witnesses blocked his path and got off their bicycles and approached his car.  One was said to be carrying a licensed weapon but this is disputed.

Davis, aided by a security team in a chase vehicle, gunned down the two civilians.

The US Consulate has claimed that the cyclist, Ibadur Rahman, was killed elsewhere by a Consulate vehicle with diplomatic plates.  Witnesses and police dispute this claim.

The Consulate further has characterized the incident as an attempted robbery, something also disputed by police and witnesses.

There has been a long history of acrimony between police and security forces in Pakistan who have long complained of American “black ops” contractors operating in Pakistan.  In July 2009, four American security contractors, with both weapons and explosives, were arrested outside a nuclear weapons development facility near Kahuta, Pakistan.