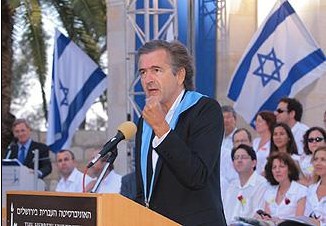 What makes one a philosopher? Probably, the capacity to aim at the essence of things, while celebrating the love of wisdom (philo-sophos). Though Bernard-Henri Lévy presents himself as a French philosopher, he seems to lack that elementary capacity. Unlike a true philosopher, Levy engages in an endless spin, typical to a Hasbara agent.

A few days ago the Huffington Post gave a platform to the alleged ‘philosopher’ Levy.

Levy doesn’t approve of the BDS (Boycott, Disinventment, Sanctions) campaign. He claims it is “anti democratic”.  I was expecting Levy to eloquently advocate ‘freedom of speech’ and human rights, but the Zionist ‘intellectual’ failed miserably. Levy followed the well-trodden Judeo centric Zionist template and spread half-baked ideas that hardly form an argument. Pathetically, in most cases, Levy’s ranting proves counter effective to his cause.

“First of all” he said, “one boycotts totalitarian regimes, not democracies… One can boycott Sudan, guilty of the extermination of part of the population of Darfur. One can boycott China, guilty of massive violations of human rights in Tibet and elsewhere. “

For some bizarre reason, Levy seems to be convinced that his beloved Jews-only state is an ‘exemplary democracy’.  “One does not boycott the only society in the Middle East where Arabs read a free press, demonstrate when they wish to do so, send freely elected representatives to parliament, and enjoy their rights as citizens.” says Levy.

I guess that Levy either, doesn’t know or just pretends not to know that in the ‘Jews only democracy’ laws are racially orientated. The Law of Return, for instance, favours Jews and Jews only. Levy should also learn about the case of MK Azmi Bishara who had to run for his life for suggesting that Israel be better transformed into ‘state of its citizens’ based on equality.

According to Levy, in a democracy the voters have the power to sanction, modify, and reverse the position of their government. It would be fabulous if Levy could enlighten us and suggest how exactly the Jews only Democracy is progressing towards an acceptance of universal rights for all.

Like all Hasbara agents, Levy is outraged by the attempt to de-legitimise Israel, yet, the philosopher in him fails to tell us what is exactly so wrong in de-legitimising a racially driven murderous collective. I also wonder what is so unacceptable about de-legitimising a state that was illegitimate to start with.

Levy doesn’t approve of the ‘one state’ enthusiasts.  He far prefers to divide the land into two states. Someone better remind the lame mind that Israel is currently one state that is located between the river and the sea. Those who support one state are actually far from being radical. They have their feet on the ground. They accept Israel being one state, with one international dialling code, one electric grid and one sewage system. However, the supporters of one state also realise that one state Israel is dominated by Jewish Talmudic racism that is far more vicious than Nazi ideology. The one staters also realise that by the time Jewish racist ideology will be defeated this one state between the river and the sea, will be Palestine.

Levy is furious with one state advocate Ali Abunimah, co-founder of Electronic Intifada who according to him “does not hesitate to compare Israel to Nazi Germany.”  It would be slightly useful, if  ‘philosopher’ Levy would be kind enough to suggest to us once and for all, what is so wrong about comparing the Jews only State with the Aryan only State also known as Nazi Germany.

Towards the end of his Huffington Post article, Levy comes with something that could almost pass for an argument.  For Levy, the Western world should have hoped to be “cured of its worst criminal past”.  It would be helpful and productive if Levy and other Zionists grasp that it’s actually the West’s problematic past that shapes our criticism of the Israeli murderous present. It is our troubled past that makes us into enemies of racist Israel.

I was looking forward to read a Zionist ‘thinker’ advocating Israel. Levy obviously failed. However, I’ll admit, that like Levy, I also have reservations regarding the BDS movement; for instance I believe that if the demand to boycott Israeli academics is valid, we should also boycott academics and intellectuals who advocate Israeli policies and Zionism worldwide, because Israel is racist to the bone and racism must be opposed. If the BDS movement is taking itself seriously, it should also move forward and demand to boycott Levy, Alan Dershowitz, David Hirsh and many others.

On one hand, a move like this would prove the BDS movement’s integrity. On the other hand, as an advocate of freedom of speech, I actually want Dershowitz, Hirsh and Levy to speak their minds. I believe that together with Mark Regev, they are the best promoters of Zionist tribal morbidity.