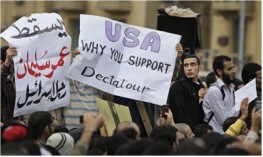 With all eyes and attention on Egypt, the unsavory ‘US Foreign Policy’ has become the topic of choice among the intelligentsia, journalists, and the overly populated US analyst colony. There are scores of analyses out there; thousands of articles, millions of blog threads and unending ‘update’ headlines on TV screens. Yet, at least in ‘popular’ outlets, reality appears to be the missing link. Don’t worry, I am not about to hit you with a long-winded article on Egypt. If you are masochistic enough to actually want my take (pages and pages of history/analyses) you can revisit a few of our pieces on the topic of nefarious US foreign policy practices here, here and here; timeless and equally applicable to what we are witnessing with Egypt, Jordan and Tunisia today. Instead, I want to share with you a few select points and coverage that got my attention:

Let’s start with the tongue and cheek protest sign in the above picture: “USA Why You Support Dectatour” Of course, these demonstrators, in fact almost the entire population in that part of the world, know the answer to this rhetorical question. I think they are trying to get Americans to ask this question and seek ‘real’ answers, no matter how unsavory, nauseating, awful…You see, this is what the US media is selling the majority as to why we support and maintain (pay for, defend…you name it) corrupt ruthless dictators:

Alliance with new governments to protect U.S. interests: security for Israel, sustainability of world energy supply and the fight against al-Qaeda and other terrorist groups.

That’s right: the above, instead of: dictators who will purchase our arms from our mega corporations, serve Israel’s interests, give us cheap oil, and become our official or semi-official base (aka: colony), and that at any price (that is, the price to the population and human rights there). Think Saudi Arabia, think Turkmenistan, Think Uzbekistan…Think about all the dictator allies we support, maintain and sustain. While we are at the topic of ‘sustaining,’ let me illustrate what I mean:

The same article source above, Bloomberg, lightly mentions the following:

Egypt is the fourth-largest recipient of U.S. aid, after Afghanistan, Pakistan and Israel, according to the State Department’s 2011 budget, receiving more than $1.5 billion a year.

Another semi alternative publication (alternative in name only) goes only half a step further and actually adds it up, the US taxpayers’ dollars that is:

American support for the Egyptian government — to the tune of $60 billion in aid over the last 30 years — garnered virtually no regular attention before the protests began.

But here is one article, written by a true alternative journalist (an independent one), where American taxpayer dollars spent on this Dictatorship ally for the last 30 years come together, and actually add up nicely:

According to a mix of United States, Syrian and Algerian sources his personal fortune amounts to no less than US$40 billion – stolen from the public treasury in the form of “commissions”, on weapons sales, for instance. The Pharaoh controls loads of real estate, especially in the US; accounts in US, German, British and Swiss banks; and has “links” with corporations such as MacDonald’s, Vodafone, Hyundai and Hermes. Suzanne, the British-Irish Pharaoh’s wife, is worth at least $5 billion. And son Gamal – the one that may have fled to London, now stripped of his role as dynastic heir – also boasts a personal fortune of $17 billion.

Mubarak’s fortune, including his wife’s and son’s, is estimated to be …$40 Billion + $5 Billion + $17 Billion= $62 Billion. We Americans have been paying this man for 30 years, for a total of $60 Billion. Was it for infrastructure, job creation…you know, all those vital ingredients? Or was it to create another king, a dictator, or as Escobar puts it, a Pharaoh with a $Billions fortune?

Here is more by another true alternative reporter:

Now, if through some incredible circumstance Egyptian President Hosni Mubarak decides to flee the country, à la Ben Ali, there’s a good chance his first-class flight would come courtesy of the American taxpayer.

Pentagon contracts show that the US government has spent at least $111,160,328 to purchase and maintain Mubarak’s fleet of nine Gulfstream business jets. (For those keeping score, Gulfstream is a subsidiary of General Dynamics.)

Hounshell also noticed a report that Egyptian First Lady Suzanne Mubarak once “commandeered a bus that had been bought with money from the United States Agency for International Development and that had been meant to carry children to school.”

But wait a minute; let’s not forget another involved party these tax dollars happen to benefit. You know who I’m talking about, right? This is where our government takes our dollars, gives it to dictator allies, and then asks them to turn around, give that money (minus the personal share for personal wealth) to our military industrial complex corporations. Then, we have those CEO’s with $$$$$$$ salaries, and $$$$$$$ to the lobbyists and $$$$$$ to our elected representatives, who then in turn, sanction giving more money, aid, tax payers’ dollars, to these dictators; and the cycle repeats, repeats, repeats…well, it’s been repeating nonstop for more than half a century.

When the two military leaders met in May 2009 to discuss “a wide range of security issues,” Egyptian Defence Minister Hussein Tantawi presented US Defense Secretary Robert Gates with a set of gifts. They included a shotgun (with five bullets), a decorative rug and a gilded photo album.

With a confidence that, in retrospect, seems dubious, Gates said “he looks forward to expanding the two countries’ military-to-military relationships in ways that promote regional stability.”

Five months after that meeting, the Pentagon announced it would sell a new batch of two dozen F-16 fighter aircraft to Egypt—a $3.2 billion deal that is among the most recent of a long string of arms deliveries from America to its North African ally. These F-16s, according to the Pentagon announcement (pdf) would support “Egypt’s legitimate need for its own self-defense.”

Today the Egyptian Air Force buzzed a crowd of demonstrators in Cairo with fighter jets much like those supplied, over a period of decades, by the US. It was a tactical decision that bore little relation to “legitimate” national “self-defense,” although it can be construed as a desperate attempt to defend Hosni Mubarak’s three-decade hold on the presidency.

Rest assured the American mainstream media won’t delve into these ‘real’ issues, because that would get into the real disease, our hypocrisy-ridden sick imperialistic foreign policy, where American taxpayers and the people of these nations are among the victims-losers, and a handful of corporations have been reaping the benefits. The media’s neocons have been twisting and intentionally misinterpreting the recent developments in Egypt. Please don’t think of only the Neocons of the Right, because the neocons of the left have been equally if not more involved in this deception game, and here is a recent example provided by Antiwar.Com, with excellent questions directed at the Israel lobby’s outspoken Maddow:

So you thought it was only the wackos on the neocon right who support Mubarak? Wrong! I’m listening right now to Rachel Maddow, MSNBC’s resident ultra-liberal, attack Rand Paul for being “offshore” because he calls for ending the $1.5 billion in “aid” to the Egyptian military.

What I’d like to know is this, though: why does Maddow think funding the Egyptian torture machine, and the Israeli occupation of Palestine, is good for America? How does it serve our legitimate interests? Is it “stimulus” money? Does she just support any and all government spending as a matter of high principle? Or does she really think it’s a good idea for us to be subsidizing a regime so brutal that even the US State Department characterizes it as “repressive”?

I am going to leave you with the following quotes from Escobar’s article:

Since the start of the protests, the Repulsive Ideology Trophy has got to go to former British prime minister and Iraq invader Tony Blair in his interview with CNN’s Piers Morgan. For Blair, democracy for the Middle East may be a good thing; but “we” have to manage it; and that means compromising with Mubarakism. Blair simply can’t understand that if Mubarakism survives with a facelift, blowback will be cosmic. And it will come from all sectors of Egyptian society, the young, the apolitical, secular and Islamists alike, and from the whole Arab world.

Slovenian Slavoj Zizek, the Elvis of philosophy, is right on the monstrous hypocrisy of Western liberals (or so-called liberals); “They publicly supported democracy, and now, when the people revolt against the tyrants on behalf of secular freedom and justice, not on behalf of religion, they are all deeply concerned.”

Real democracy can only be a dynamic grassroots process, from the bottom to the top. It’s not a fixed formula, it’s constantly reshaping itself. That’s bound to scare Western global elites – from “liberals” to the fear/warmonger set – because real democracy implies a huge loss of privilege for the “stable”, developing world comprador classes that are slaves to these haughty Western elites. No wonder they’re all as scared – and scary – as dead men walking.