Ryan calls for $32 billion in cuts

House Budget Chairman Paul D. Ryan released a fiscal 2011 budget allocation Thursday that would cap spending at $1.055 trillion and slice $32 billion from current government spending levels this year.  The eagerly awaited numbers are sure to touch off a battle between House Republicans and Democrats in both chambers over where, how quickly and how much to cut spending.   The allocation provides House GOP appropriators with the final target they need to write a stopgap funding measure to pay for the last seven months of fiscal 2011 after a continuing resolution (PL 111-322) expires March 4. 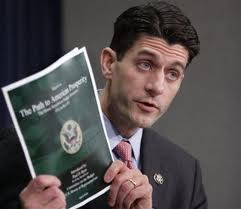 The allocation by Ryan, R-Wis., represents a $58 billion reduction below President Obama’s proposed fiscal 2011 budget request of $478 billion for non-security programs. As defined by GOP leaders, non-security spending includes all discretionary spending not for defense, homeland security, veterans and military construction.  The reduced budget allocation follows a House GOP campaign promise to scale back non-security spending to the levels in place in fiscal 2008 — $378 billion — before Congress plowed hundreds of billions of dollars into a bailout of the financial services sector and into stimulating the economy following the financial collapse.

In their pre-election “Pledge to America,” House GOP leaders said they would save at least $100 billion, which they say was based on the president’s request of $478 billion in fiscal 2011 non-security spending.

GOP staff said the new budget allocation would cut non-security spending to 2008 levels for the remaining seven months of the fiscal year. Those cuts would amount to $58 billion in reductions over the next seven months, compared to the president’s request for the same time frame, they said.

Conservative House Republicans have pressed leaders to cut a full $100 billion in fiscal 2011. But a GOP leadership aide said that with five months of the fiscal year gone by the time the stopgap expires, implementing the cuts only for the remainder of the year was the “fairest way” to craft the allocation. “You’re not going to achieve $100 billion over part of a year,” he said.

In order to cut $100 billion before the fiscal year ends Sept. 30, appropriators would have to make even deeper cuts than the new allocation calls for, reducing the spending rate for the remaining seven months of the year below 2008 levels.

Later on Thursday afternoon, House appropriators released their spending allocations, known as 302(b)s, which divvy up the total amount of money allowed under Ryan’s cap among the 12 Appropriations subcommittees.

With the House steaming toward deep cuts, several Senate Democrats have said they would likely rebuff the kind of scaling back envisioned by House conservatives.

Still, the No. 2 Senate Democrat said he expects lawmakers to agree to some funding reductions in the months ahead.

“I say it with real regret and some major concern, but I have listened to the rhetoric from across the Rotunda and considered the reality,” said Senate Majority Whip Richard J. Durbin, D-Ill. “I think that we’re going to be facing some cuts before the end of the year.”

Some of the proposals coming from House have been “drastic” and would be “very hurtful” to the struggling economy, Durbin said. He said that cuts would need to be made carefully, in a way that would keep the economy on track.

“Let’s do it in a sensible fashion, so that we don’t kill the recovery and we don’t stop the basic services of government,” said Durbin, who also serves as the chairman of the Financial Services Appropriations Subcommittee.

Durbin is particularly worried about maintaining the strength of agencies that protect consumers, such as the Securities and Exchange Commission. If Durbin and his new House counterpart, Jo Ann Emerson, R-Mo., the chairwoman of the House Financial Services Appropriations Subcommittee, are able to work together on seeking ways to reduce spending, they would come up with cuts that would do less harm, according to Durbin.

“They would be painful but they would be sensible, if we are given some time and some goals to meet,” Durbin said.

Ryan’s allocation limits non-security spending to $420 billion for the current fiscal year, down $44 billion from $464 billion that was spent in fiscal 2010.

Not all programs would be cut under Ryan’s budget limits. Security spending would rise to $635 billion in fiscal 2011, up from $627 billion last year. That is $16 billion less than proposed in Obama’s fiscal 2011 budget.

Because Congress did not pass any of the fiscal 2011 appropriations bills, the government is being funded by a stopgap measure. That law provides, over a year, a total of $1.087 trillion in discretionary spending and $461 billion for non-security spending.

The Budget chairman was given the authority to set the budget allocation as part of a GOP-authored House rule, which instructs him to scale back non-security spending to fiscal 2008 levels or less in the absence of a congressional budget resolution.

Under the rule, Ryan, who is currently in Wisconsin, must publish the allocations in the Congressional Record for them to take force. He plans to do so when the House returns to session next week.

Though Ryan divided the allocation, known as a 302(a), into non-security and security portions in Thursday’s release, when the allocation is published in the Congressional Record it will appear as a single total discretionary spending number.

House appropriators have been awaiting the numbers, which will allow them to complete a stopgap funding vehicle that incorporates domestic spending cuts. That measure is likely to be released late next week. Majority Leader Eric Cantor, R-Va., said the House will consider the stopgap the week of Feb. 14, following President Obama’s release of his fiscal 2012 budget.