Last May, the military arrested Private First Class Bradley Manning, a military intelligence officer who had served overseas in Iraq, over charges that he was involved in leaking numerous classified documents and videos to the Wikileaks whistleblowing group, including a video of a U.S. attack helicopter killing numerous unarmed journalists.

Since his arrests, numerous civil liberties groups and investigative journalists have protested the conditions under which Manning is being held, noting that he has been kept in solitary confinement and is denied even access to a pillow or bed sheets. This is particularly shocking in light of new information revealed that Manning was suspected of having poor mental health before he was deployed to Iraq, with some superiors even requesting that he not be given firearms. Yet despite this press coverage of Manning’s treatment the military has offered very limited access to him and has refused to address the concerns of human rights and civil liberties advocates.

Now, Rep. Dennis Kucinich (D-OH) has sent a letter to Defense Secretary Robert Gates inquiring about Manning’s condition, protesting the Army’s treatment of him, and requesting a visit with the imprisoned solider. In the letter, Kucinich writes that if Manning is need of mental health treatment, the “Army must end the extreme conditions of” his confinement, or at the “very least…explain the justification” for taking such extreme measures during his imprisonment: 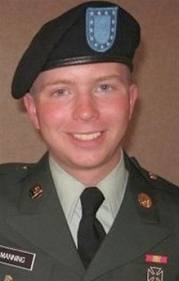 Now, reports indicate that the Army has taken Pfc. Manning, a soldier with documented mental health problems, and confined him under conditions that are almost guaranteed to exacerbate his mental health problems. If true, the Army’s treatment would obviously constitute “cruel and unusual punishment” in violation of the Eighth Amendment to the United States Constitution.

If these reports are true, the Army must end the extreme conditions of Private Manning’s confinement, and provide him with the mental health treatment that the Army recognized he needed even before his deployment to Iraq. At the very least, the Army must explain the justification for confining someone with mental health problems under conditions that are virtually certain to exacerbate those problems and explain the danger he now presents that only these extreme conditions of confinement can avoid.

While Manning’s treatment has made waves in the media, it is important to remember that solitary confinement is a practice that is common in America’s prison system. A 1999 report by the Department of Justice found that some states locked up as many as 20 percent of their prisoners into penal systems that placed them under solitary confinement for 23 hours a day.

Last month, leading human rights groups Amnesty International and the Physicians for Human Rights both sent letters to the Department of Defense protesting Manning’s treatment; they noted that solitary confinement is widely used across the United States, it is almost unheard of for it to be used against a prisoner like Manning who has yet to even be convicted of a crime.