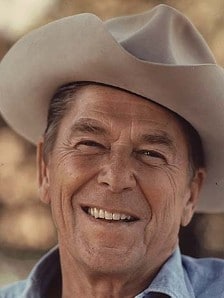 I can’t resist defending Ronald Reagan  — and losing friends as happens whenever I defend that even greater man, Richard Nixon.

Reagan was really a good guy — but he didn’t know his enemy, and didn’t even recognize them when they infiltrated his administration  — when they arranged an assassination attempt to but GHW Bush in the Oval Office  — and then when it failed they controlled Reagan by gatekeeping non-Rockefeller viewpoints and actually actually slipping him poisons that degraded his functioning.

Donald Regan, his Secretary of the Treasury was part of the sabotage of the US economy  — the co-architect with Burns and Volker of the so-called S & L scandal  — that diverted all investment to junk while looting savers and destroying the Savings and Loan industry to effect greater financial-intermediary concentration in Rockefeller/Morgan/Sachs/etc hands — the biggest economic crime since crashing of the stock market in 1929.  But Ronald Reagan did not know what Donald Reagan was up to.

And as for Iran Contra — Reagan’s objective was to defeat communism.  But Reagan had a J. Edgar Hoover view of communism rather than a Joe McCarthy view  — he read the Austrian School economists and the libertarians and the old-right conservatives  — without realizing that the Austrians were merely apologists for Rothschild-Rockefeller interests bent on plundering the US and turning it into huge fiefdoms and landed estates   and plantations for a new Zionist-Masonic aristocracy.

But I know Reagan was not evil  — although he was used by evil  — because I myself held exactly the same views without realizing the evil behind them  — in 1980 I was in the doctoral program in economics at Texas A & M  – a convinced Misesian and Friedmanite Monetarist and reader of Ayn Rand  — such a perfect antidote for Lyndon Johnson and Jimmy Carter economics (of Samuelson, Galbraith, the “inflationists” Miller)  — who really understood what Donald Reagan, Volker and the rest were up to at that time?

Reagan looked up to Wall Street as the bastion of “free enterprise” — I doubt he had heard of social credit  — I know I had not  (except for reading something about Kitson in the library one day  — but then forgetting the name — until I rediscovered him and first learned about Douglas and Kitson in the early 2000s.  These thinkers just were not known to Americans in Reagan’s time  — communism and inflation and the welfare state were the issues.    Yes, the big trade deficits began under Reagan, but there were justified as temporary and necessary for buying China off to keep her from reuniting with the USSR against us etc.  — or so we thought.

I believe that Reagan of 1980  — if he could be moved to our time and given time to study the situation  — would be a populist  — would undergo the same realizations that I did  — because the basic American virtues that are in many of us  – most certainly lived in him.  He really was a good guy, and no one is going to convince me otherwise.