Some longtime users fear that a planned $6-million renovation of Heroes Course and a new relationship with UCLA could forever alter its character and perhaps even limit access for vets.

As a thank you to returning World War II veterans, the Jewish members of Hillcrest Country Club created a nine-hole golf course on seven acres of former rancho land between Wilshire and Sunset boulevards. 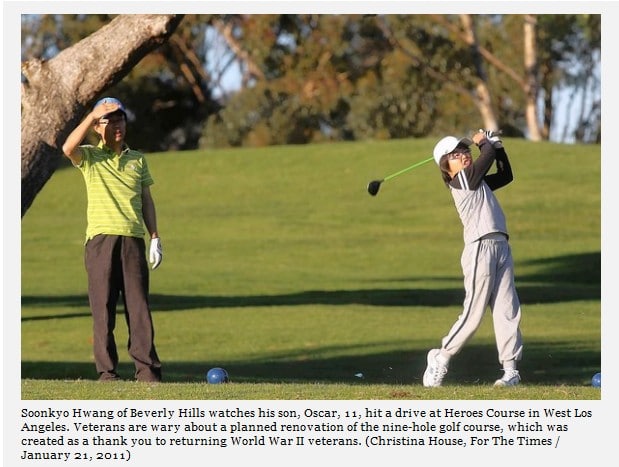 For more than six decades, the rolling, par-3 links at the West Los Angeles Veterans Affairs campus have drawn a loyal clientele of veteran duffers who roam beneath pepper and eucalyptus trees and tee off at holes named for legendary WWII commanders such as Gen. Dwight D. Eisenhower and Adm. William F. Halsey.

Now, however, some longtime users fear that a planned $6-million renovation of Heroes Course and a new relationship with UCLA could forever alter its character and perhaps even limit access for vets.

The federal Department of Veterans Affairs has agreed to partner with a nonprofit group and the university to refurbish the property, with the goals of improving the course, increasing use and generating additional revenue. Officials say they hope a renovated course will not only pay for operating expenses and improve recreational opportunities for former service members, but also bring in cash for veteran rehabilitation programs.

United States Veterans Initiative, the Los Angeles-based nonprofit, has hired a local pro to manage the course and, with UCLA, is raising money to refurbish the grounds and cover future maintenance costs.

“It really deserves to be a diamond, but right now it’s a diamond in the rough,” said Will Gustafson, chief executive of Synergy Golf Partners, a Reno-based management and development company working pro bono on the project.

The decision to contract with U.S. VETS follows a troubled chapter in the golf course’s history. For nearly two years starting in early 2009, the course was closed as federal authorities investigated claims of theft. In the end, two workers were found to have embezzled an estimated $180,000 in greens fees and concessions.

Before the closure, the course was averaging about 50 rounds of play a day. Since U.S. VETS reopened the course in late November, it has recorded about 35 rounds daily, but the group and the VA hope to boost that number.

“We are looking forward to the partnership,” said Ralph Tillman, the VA campus’ chief of external affairs. “They [U.S. VETS] have a proven track record in providing an array of services for veterans.”

Among other proposed changes, UCLA intends to provide golf clinics and help coordinate seminars on golf course design, operations, maintenance, and club making and repair. “This has the potential to be one of the premier places in the country for veterans to learn about golf, to get lessons and to have a safe place to go,” said Derek Freeman, head men’s golf coach at UCLA.

Some veterans are keeping a wary eye on UCLA’s involvement.

Stan Dawson, 71, of Santa Monica, who plays the course nearly every day, remains unconvinced that vets will come out on top when it comes to securing tee times. “I think UCLA will be calling the shots, and vets will get the short end of the stick,” he said. “Old beat-up vets like me … they’ll mow us over.”

Stephen Peck, president of U.S. VETS, sought to allay concerns, saying that “100% of the time veterans get priority, particularly hospitalized vets and vets in the community.” Members of the public will also be allowed to play, as they are now. Greens fees range from $3 to $13. Hospitalized vets play for free with recreational therapists.

Stretches of the 1,144-yard course look threadbare. The layout leaves golfers driving blind, as it were, hitting balls over the heads of other players. Safety is a prime goal of the overhaul, as is ensuring that every hole will be accessible to disabled golfers using special carts.

In addition to sprucing up greens and sand traps, U.S. VETS, which has a five-year contract with a five-year renewal option, plans to add a snack bar to attract lunch business, install a new irrigation system and erect a clubhouse to replace the closet-size Quonset hut that has served since the mid-1950s.

Construction will be phased, said Peck, a former Marine who served in Vietnam and is the son of actor Gregory. First, workers will spend about four months building two greens with sand traps where golfers will be able to practice chipping and putting. Once that opens to vets and UCLA’s men’s and women’s teams, the nine-hole course will close for about six months of renovation. The final stage will be the clubhouse.

Each year, U.S. VETS, which assists veterans in five states and the District of Columbia, will enroll eight veterans in its vocational program at the Heroes Course, with the aim of finding them jobs at area golf courses. The federal Department of Labor and the Los Angeles Homeless Services Authority, a city-county agency aimed at helping veterans get jobs, are providing $1.3 million in grants.

“We know how strongly people feel about this land,” Peck said. “It’s important that vets feel they’re not losing control of it.”