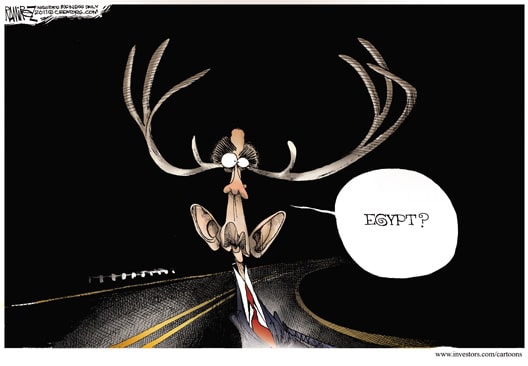 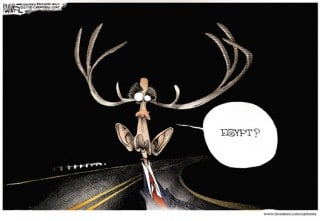 President Obama has been caught like a deer in the headlights by Egypt’s internal cry for freedom and justice whereas empty words and rhetoric will no longer assuage a true people’s revolution that demands change and meaningful reform: Allen L Roland

CAIRO, Feb 9 (Reuters) – ” Egyptians have staged one of their biggest protests yet insisting President Hosni Mubarak step down immediately and ignoring a government plan to transfer power. For many protestors it was the first time they had joined the daily demonstrations in Cairo’s Their Square showing the movement, now in its third week, still is gaining momentum.”

The old world order continues to crack under the assault of the Egyptian people’s revolution and the demand for truth and transparency ~ which are the two needed ingredients for true change. President Obama has been caught, like a deer in the headlights, by America’s continued hypocrisy. Alternet reports that over the weekend, U.S. envoy to Cairo Frank Wisner embarrassed and confused the White House by breaking from the official Obama administration line regarding Egypt (Mubarak should step down peacefully, etc.). Speaking in Cairo on Saturday, the retired State Department employee said that “President Mubarak’s continued leadership is critical: it’s his opportunity to write his own legacy.”

Whoops! In Cairo, Robert Fisk of the Independent reported on the current furious back-pedaling now underway at the White House and reveals that Wisner had business ties to the Mubarak regime: “ The US State Department and Mr Wisner himself have now both claimed that his remarks were made in a “personal capacity”. But there is nothing “personal” about Mr Wisner’s connections with the litigation firm Patton Boggs, which openly boasts that it advises “the Egyptian military, the Egyptian Economic Development Agency, and has handled arbitrations and litigation on the [Mubarak] government’s behalf in Europe and the US“. Oddly, not a single journalist raised this extraordinary connection with US government officials – nor the blatant conflict of interest it appears to represent.”  Full article ~

Meanwhile the Pentagon is moving U.S. warships and other military assets to make sure that it is prepared in case evacuation of U.S. citizens from Egypt becomes necessary, White house officials said Friday. But the USS Enterprise attack carrier is also being kept on station in the eastern Mediterranean and the Enterprise does not appear to have any dual role for evacuations ~ but is simply an offensive attack carrier which sends a far different message to Egyptian people’s revolution. Are these ships protecting the protesting people of Egypt or the faltering Mubarak puppet regime in Egypt ?  Full article ~

The three key methods of the old world order in the Middle East are Coercion, Control and Military Power and it appears that Obama’s allegiance to the financial elite as well as Israel and AIPAC are rapidly leaving him with only those options but most certainly it is not bending to the will of a long oppressed people’s revolution. Expect more talk and posturing as well as the gradual reinstatement of public restrictions and police state control as the Mubarak / Suleiman regime attempts to regain its footing and credibility. Suleiman is Egypt’s Dick Cheney (Darth Vader) with the same shared interest in the dark side along with the same shared blessing of Israel.

This is not Obama’s shining moment and his true allegiance to the Old World Order as well as the corpocracy and global elite is now being witnessed by the world in the glaring headlights of the bottom-up Egyptian people’s revolution ~ a revolution which now most assuredly is seen as a direct threat to America’s rapidly crumbling empire. Norm Chomsky correctly says, “ It’s not radical Islam that worries the US, it’s Independence ~ The nature of any regime it backs in the Arab world is secondary to control. Subjects are ignored until they break their chains.”

As the UK’s Palden Jenkins writes ~ “ The Young Middle Eastern movements of today suggest a quantum shift that resembles that of the Sixties. They represent a new computation of the issues and solutions, starting from a new starting-point and seeking a new horizon. The Street has a new perception, facilitated by the community of the cellphone, e-mail, YouTube, satellite TV and the airplane. It’s driven from below, it’s youthful and driven by half of the population. It’s an organic network, not an organisation. It has language and laws, shared sentiments and perspectives. This is a form of texted, e-mailed hyper-democracy….. The difficult bit for Westerners is that, having been top dogs, we have to rejoin the human race on equitable terms before we can get our fingers back on the pulse. Our buzzwords – peace, freedom, democracy and human rights – sound good, but our actions smell badly. We continue to want to maintain our comfortable lifestyles and export our double standards, whatever the cost to others. So the world is bypassing us. This is why we need to recognise that what’s brewing in the Middle East is worth watching. Don’t be deceived ~ it’s not just bombs and rioting. There’s much more.” [email protected]

The revolting Egyptian people are not buying into our Old World Order playbook which is Promise, Stall, Coerce and Control change. This is precisely what Obama utilized in his 2008 Presidential election mandate to the American people ~ who also demanded change and meaningful reform and are still waiting.

Next time we will take to the streets like our Egyptian brothers and sisters and it may well be sooner than later. In a nutshell, we are witnessing large-scale growing global unrest ~ where entire populations, suffering in poverty, are refusing to be exploited at the hands of a small ruling elite who are manipulated by foreign interests such as the United States.

The times are a changing!