One of the biggest problems tracking reports across the country is that there are days when I get hit with more news than I can stand. It makes my head hurt to think of how far we’ve come, then get whacked with one bad news report after another. 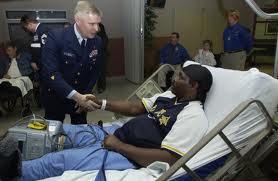 More war veterans at risk of HIV infection after VA hospital error
A dozen more South Florida veterans were being notified Tuesday the colonoscopies they had at the Miami VA hospital might have been with improperly cleaned equipment. It’s the third time such notices have been made.

The Veterans Administration said Tuesday it has found another 12 South Florida veterans who never were notified they might have received colonoscopies with improperly cleaned equipment at the Miami VA hospital as far back as 2004. It’s the third such notification, totaling nearly 2,500 veterans.

The VA, which last year said it had taken extensive steps to prevent another such notification error, again blamed the way in which the hospital keeps medical records.

VA officials said this error was discovered when the Miami U.S. Attorney’s Office, gathering information related to veterans who have filed lawsuits in the matter, asked the Miami VA hospital to recheck its records. While the VA hospital has electronic medical records, it said the errors were found by checking supplemental paper log books.

It wasn’t clear why the 12 new names would be on paper but not electronic records. Notification to the 12 veterans began Tuesday; by late afternoon all but three had been reached, a spokeswoman said.

Scott health-care policy coordinator Jane Johnson said the governor’s office was still working with Veterans Affairs director Bob Milligan on the specifics of how to hand veterans homes over to private enterprise, a concept she called “public instrumentality.”

“The homes would be operated as a private entity and the employees would not be public employees,” Johnson told the House Health Care Appropriations Committee on Tuesday.

On this Scott is as bad as Bachmann. He can get cheers in Eustis at a Tea Party event but when he wants to cut the budget off the veterans’ backs, he can’t donate enough money to make up for it. Maybe this is what was behind his huge donation to the Wounded Warrior Project.

Scott said during a ceremony Wednesday at the governor’s mansion that he visited the group’s Jacksonville headquarters while campaigning and was impressed with the work it does to help wounded veterans.

Scott said, “You could just see that lives were changed through Wounded Warriors.”

Scott, a Navy veteran, also said that his administration will put a strong focus on military issues.

What he said with this donation doesn’t measure up to what he said about the budget. But then you’d have to remember that Scott was involved in private healthcare so he’d know how much money private companies stand to make off veterans. What he doesn’t say is that providing care to veterans would still be funded by tax payers but the veterans would not be served with their unique needs.

VA Dentist May Have Exposed Veterans To HIV, Hepatitis

DAYTON, Ohio — More than 500 local veterans may have been exposed to diseases like HIV and Hepatitis.
On Tuesday, officials at the Dayton VA Center said 535 veterans may have been exposed to infectious diseases during visits to the dental clinic over the past eighteen years.
A testing clinic has been set up on the grounds of the Dayton VA Center effective immediately.

Members of Congress are hoping to get answers about the the John Cochran VA Center.

The Department of Veterans says John Cochran is the worst VA hospital in America in some areas, and among the very worst in many others.

You can read more and find links at my blog Wounded Times Blog
Another story on Cochran VA Medical Center.

By Robert Koenig, Beacon Washington correspondent
Updated 10:56 am, Tue., 2.8.11
WASHINGTON – Disturbed by reports of continued problems at the John Cochran VA Medical Center in St. Louis, all four U.S. senators and six House members from Missouri and Illinois are asking the Department of Veterans Affairs to investigate and “find solutions” to the safety issues at the hospital.

In a letter sent Tuesday to Veterans Department Secretary Eric Shinseki, the lawmakers urged the VA to address concerns about patient safety as soon as possible. “Potential problems in quality management cause grave concern, not just for veterans served by Cochran, but the entire community,” they wrote.

“We offer to work with you and area veterans to find solutions to these concerns so that we can restore the trust of our veterans and bring [Cochran], and all area VA facilities, to the highest level of quality customer service and safety.”

The lawmakers asked the VA to list measures taken to prevent future contaminations and to report any health problems discovered as a result of the most recent incident. They also requested to be informed of the results of instrument handling reviews conducted in response to an incident last June that caused the VA to suspend services in the dental clinic.

Feb 8, 2011
For years, the United States has been criticized for the way they have handled their war veterans. Local veterans are up in arms as frustration builds over what they say is a lack of quality service at the Laredo Veterans Health Clinic.

Laredo war veterans thought their fighting days were over after putting their lives on the line for their country, but they are in another battle over what they say is a lack of quality health care. Vietnam veteran, Jesus Guerra, says, “We went to war because we believe in freedom. We merit respect and services and we aren’t getting them.”

On Tuesday morning, clinic administrators met with a committee of Laredo war veterans to discuss possible improvements for the clinic that has had countless complaints of poor customer service. With plans to expand the clinic in the works, Congressman Henry Cuellar says there needs to be some changes. Currently the clinic is understaffed after unexpected departures from numerous employees. While they do say they plan to hire a new physician in about a week, V.A. officials refused to discuss the state of the Veteran’s Clinic on camera – leaving some veterans wondering about the future employees of the clinic.

The congressman says Laredo’s war veterans have earned the right of quality health service, and there is no room at the clinic for any employee who stands in the way of that right. He goes on to add, “If somebody is misleading the veterans there at the clinic I think its time for that person to go and find a new job. I don’t want people to think I’ve got a government job and I can do whatever I want to.”

These problems are easy to ignore if they remain local issues but when you look at what is going on across the country, it is clear there is a huge problem. The VA has an obligation to provide care to our veterans no matter where they live. Fixing the VA is about taking care of all veterans now or tomorrow people wanting to privatize the VA will win and veterans will lose.