AT THE SCENE-MEDICAL SUPPLY CENTER DESTROYED

By Ken O’Keefe and Gordon Duff for Veterans Today

“We’re in the building here, what do we have here?  Medical supplies…Jesus Christ.” Ken O’Keefe

February 9, 2011 (VT) Gaza:  Last night, Israeli planes bombed a medical supply center in Gaza. The bombing attack lasted only 20 minutes or so, short when compared to the “London blitz” during World War II but similar in other way.  Israeli planes were still overhead while film crews were on the scene.

Israel has yet to release a statement taking credit for the attack.

The systematic destruction of necessary support services, health care, water, sewage, electric, schools continue.  Were our film team not to have been on the scene, media would likely have reported this as a poison gas plant or a rocket factory.

To help with the needed clarification about the secret Israeli terror campaign, we will enter the burning building and examine exactly what is there.

The American made munitions destroyed a medical supply warehouses in a residential neighborhood.  There are no police or government facilities nearby.

At the scene, fires raged into the night.  As video will show, an examination of the debris, while the building was still aflame, shows clearly that the facility was targeted because of its vital role in providing needed health care materials to a population that has been systematically denied even antibiotics. 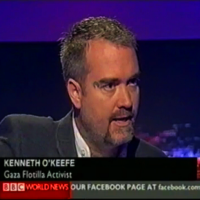