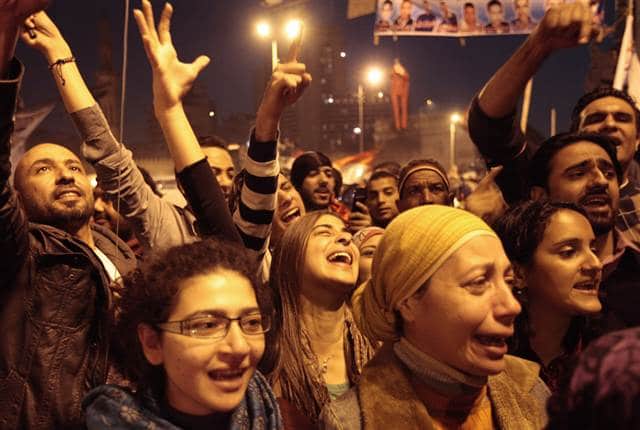 Hurriya is Arabic for Freedom: Just Listen to Egypt Roar

“Just listen to that roar,” urged a CNN correspondent in Egypt, as thousands of Egyptian protesters charged, fists pumped, against hundreds of armed Egyptian security forces. What a roar it was, indeed. The protests have shown the world that Arabs are capable of much more than merely being pitiable statistics of unemployment and illiteracy, or powerless subjects of ‘moderate’ but ‘strong’ leaders (an acronym for friendly dictators).

The times are changing, and British MP George Galloway’s comment about the Arab lion roaring again seems truer by the day. The Egyptians have revolted in style, and their revolution will go down in history books with such adjectives as “great”, “noble” and “historic”.

Truth be told, Arabs have had their fair share of conjured ‘revolutions’. Arab regimes have always been generous in how they ascribed the loaded term to their military coups or other stunts designed to impress or intimidate the masses. Any modern history of the Arab world will reveal an abundant use of the term ‘thawra’ – revolution. The label has been useful, for those who dared criticize a regime, or demanded basic rights (such as food) could then be dubbed enemies of whatever make-belief revolution the men in power championed. Innumerable Arab political prisoners were designated ‘a’da’ al-thawra’ – enemies of the revolution – and they paid a heavy price for their ‘crimes’. In Egypt alone, rough estimates put the current number of political prisoners (from different ideological backgrounds) at 20,000. The figure must be much larger now that the new enemies of the revolution – i.e. most of the Egyptian population – have dared demand freedoms, rights, democracy, and the biggest taboo of all: social justice.

If there is any revolution deserving of the name, it is this one. Thanks to Egypt, people the world over have been forced to re-think their previous idea of “Arabs”. Even many of us who insisted that the future of the Middle East could only be decided by the people themselves had eventually started to lose hope. We were told our words were redundant, sentimental, and, at best, an opportunity for poetic reflection, but not realpolitik. Now we know we have been right all along. Egypt is the clearest possible manifestation of the truth of people shaping their own history – not just in the Middle East, but anywhere.

The spontaneous popular revolution in Egypt was a most befitting uplift to the collective humiliation that Arabs have felt for so many years, but even more acutely since the US invasion and utter violation of Iraq.

“It became almost a burden being an Arab”, a caller told Al Jazeera. Looking “Middle Eastern” became sufficient grounds for suspicion in international airports. It was not considered entirely racist to ask such questions as “Are Arabs capable of achieving democracy?” In fact, heated media discussions emanated from the type of questions that pondered what Arabs were – or rather, were not capable of achieving. Every war against the Arabs was done in the name of “bringing” something to people who seemed impeded by their own collective failures. In one of my first political science classes at the University of Washington, years ago, the professor told us that we would be “examining the Middle East, which consists of strong governments and weak peoples.” With the exception of Israel, of course.

The media has long repeated the mantra that Israel is the Middle East’s only democracy. Combined with serious doubts regarding the Arabs’ readiness for democracy, the conclusion offered is:Israel carries similar values to the US, the West, the First World, the civilized hemisphere, and the Arabs epitomize all the ailments of the world. It matters little that Arab regimes were made ‘powerful’ by the backing of their western benefactors, or that oppression – in the name of fighting the enemies of peace and progress – was urged, financed and orchestrated with western interests in mind. The fact that the bullets and canister teargas that killed and wounded numerous Egyptians had the following words inscribed on it in Arabic: ‘suni’a fi al-wilayat al-mutahida al-amrikyia’ – Made in the United States – was also deemed entirely irrelevant to any discussion on how and why Egyptians were being suppressed or why the Arab Lion must never find its roar.

“The much-feted Mossad was taken by surprise,” wrote Uri Avnery. The CIA was too, although US lawmakers are trying to determine “whether the CIA and other spy agencies failed to give President Obama adequate warning of the unfolding crisis in Egypt” (as reported by Greg Miller in the Washington Post, February 4). Senator Dianne Feinstein who heads the Intelligence Committee, accused the intelligence community of ‘lacking” performance. The CIA should have monitored Facebook more closely, she suggested.

But there can be no telling when a nation revolts. Most of the chanting multitudes have no Facebook accounts. They don’t tweet either. In Tahrir Square, a man with a moustache, dark skin and handsome features carried a cardboard sign on which he had written, rather hurriedly: “I want to eat. My monthly salary is 267 (Egyptian) pounds – approx $45 – and I have four children.”

Others want to breathe the air of freedom. Others still want justice. Dignity. Equality. Democracy. Hope. How can such values be measured, or safeguarded against?

There is a very popular word in Egypt – al-Sabr. It means patience. But noone could predict when the patience would run out. Arab and Egyptian intellectuals didn’t see it coming, and even the country’s opposition parties were caught by surprise. Everyone tried to catch up as millions -of long-oppressed Egyptians erupted in astounding unison: hurriya, hurriya, adalah igtimayyia – freedom, freedom, social justice.

Just when we were told that a religious strife was about to engulf Egypt, and that the people were subdued to the point that there was no hope, millions of brave Egyptians declared a revolution that brought Muslims and Christians together. The courage and the bravery they displayed is enough to restore our faith in the world – in the human race, and in ourselves. Those who are still wondering if Arabs are capable of this or that need not ponder anymore. Just listen to them roar, and you will find the answer.

ABOUT THE AUTHOR:  Ramzy Baroud (www.ramzybaroud.net) is an internationally-syndicated columnist and the editor of PalestineChronicle.com. His latest book is My Father Was a Freedom Fighter: Gaza’s Untold Story (Pluto Press, London), available on Amazon.com.