Home Government Lessons Learned in the Streets of Cairo 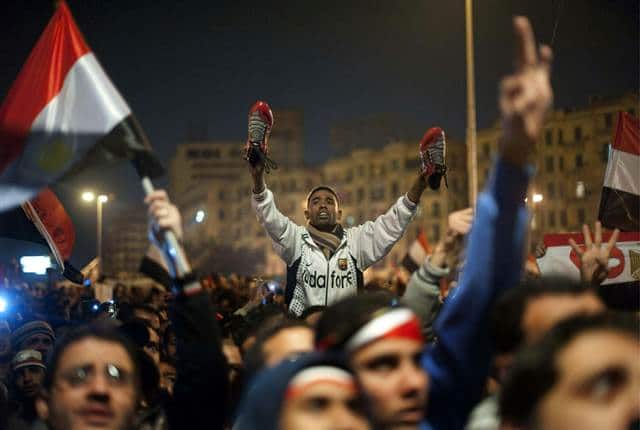 “Simple description of observable reality does nothing more than capture the ‘accidents’ that identify the particularity of something, not convey the greater universal truths, the ideal form, that lies hidden beneath the accidental appearance.”

For fifteen days and counting, the people of the world have been watching in wonder and witnessing in fascination the Egyptian people flow through the streets of Cairo. As they streamed in and out of Tahrir Square we sensed the ebb and flow of the Egyptian people pulsing before us—vibrant, brilliant, eloquent—a symbolic force echoing the dreams and desires of humanity around the world. From our vantage points, witnessing this rare and powerful movement of human will on television screens in every land, we interpret the events to give meaning and purpose to their bravery, their commitment, their endurance, in the face of absolute force that has imprisoned them for thirty years in their own land.

And in our guts we feel the rising tide of impotence that has lifted our numb bodies in the ebb and flow of a silent sea of acquiescence and obeisance to the absolute forces that control our lives. Helplessness and shame swell in our hearts as we realize the frustrations, the torment and suffering these people have lived while the world watched and waited and did nothing, decade upon decade. There are lessons to be learned from the streets of Cairo.

But let us reflect for a few minutes on this rare scene of human will embodied in millions of Egyptians swarming through the streets of Cairo with banners held high, scribbled signs raised aloft flapping in the wind, children grasping their mother’s hand, arms lifted in jubilation, faces wet with tears of happiness, laughter ringing in the air, arms around each other in joyful celebration, horns blaring, flags of black, white and red spread parallel to the ground caught in the breeze as they furl in undulating waves among the crowds, an audible hum hovering over the huge gathering that breathes as one in motion to and fro, a living vibrant organism of humanity.

Beneath that ever moving, pulsating, audible scene, the image that captures hundreds of thousands of individuals, the observable reality in all its unique “accidents” of faces, colours, garments, noise, movements, objects, resides another reality, deeper than the observable, the universal truths that lie hidden beneath the accidental appearances: a human’s destiny and individual actions as well as understanding of self or anything at all are, by virtue of human nature, beyond an individual’s control and beyond comprehension. This is both the marvel and the evil of human existence. Yet here in this scene, in February of 2011, the Egyptians exemplify the dreams and desires and hopes of all free people who unite in oneness with them to throw off the limitations that those who thrive on indifference, on anger, on hate, on racism, on arrogance impose on them by force of will through occupation, subjugation and oppression. There are lessons to be learned from the streets of Cairo.

None of us viewing that scene can know what resides in the hearts and minds of those who braved the forces that have controlled their destiny for over thirty years, nor can we know what will follow. We know from experience that some desire to take control and impose their will on others. In our world that can be a dictator or an apparent democracy; in both cases it is those who control money that ultimately control all, corporations or individuals with the means to assert their will. A hundred years ago Mark Twain decried Teddy Roosevelt’s empirical designs by praising the brutal slaughter of the Moro’s in the Philippines by our military because it represented the ascendency of human amorality against fellow humans.

Today American empiricism accomplishes the same end across the globe by buying “peace” agreements with Mubarak that stifle the rights of his people, bury alive more than five million who live in the squalor of garbage and cockroaches in the Cities of the Dead in Cairo, force half the population to live on less than $2 a day, while they imprison Palestinians behind walls and lay military siege to Gaza.

“Mubarak became president (after Pres. Anwar Sadat’s assassination) in October 1981, two years after Egypt signed its peace with Israel. Under Mubarak, Egypt always adhered closely to the treaty’s terms. But the services it performed for Israel and the United States went much further than that. Indeed, Mubarak’s Egypt became both a shield and a spear for Israeli interests in the region, and globally. It shielded Israel politically from demands that Israel abide by international law in East Jerusalem and the rest of the occupied territories. And it worked closely with Israel to combat Hamas and Israel’s many other challengers.” (Reassessing U.S. aid in light of Egypt, The Congress Blog, Helena Cobban – 02/02/11)

There are lessons to be learned.

But this sentence is too broad; it does not touch the soul, the hidden truth lies beneath it. Like their Egyptian brothers and sisters, the Palestinians suffer behind walls, gates and checkpoints. Can we “truly comprehend what it is that makes an old man from a West Bank village face the brutality of Jewish settlers, year after year, as he returns to harvest his few remaining olive trees? Or a Palestinian woman from Gaza who keeps coming back to hold a vigil before the Red Cross office with a framed photo of her once-young son, now ailing in some Israeli jail?” (Ramzy Barhoud, “Insisting on their humanity”).

This is suffering caused by our closest friend in the mid-east, the only Democracy in the mid-east, the country the world should turn to if it is to distinguish between civilized humanity and that exposed by the people in the streets of Cairo. How fast the good friend Mubarak becomes a despot when the fear of change looms on the horizon. This our tax dollars pay for; this we call democracy.

Americans more than most must respond to this scene since their government has been responsible for “three decades of failed economic policies, massive poverty, continued repression of religious rights and near zero tolerance for political dissent.” (“Can peace with Israel survive Egypt’s revolution?” Jewish Times, Neil Rubin). Strange this quote comes from the Jewish Times, when it is Israel’s very existence that has embedded America in Egyptian politics. Our support for Israel glows in the darkness of mid-east inhumanity caused by dictatorial powers, military occupation, and apartheid.

One would think that the scenes in Cairo would lead both Israel and the United States to recognize that their approach these past 63 years by force of arms has wrought only destruction, humiliation and death to the vast majority of the people of Egypt and Palestine, indeed to the whole of the mid-east. One would think, that the lessons to be learned, graphically demonstrate that a mutual respect for all people, not just the inner circle of the powerful in Egypt or the Jews only in Palestine, require an equitable distribution of wealth to all, comprehensive employment for all, health for all, education for all, freedom of movement for all, and equitable housing for all if a civilized society is to exist for all.

If the streets of Cairo teach us anything, they teach us that those who horde for themselves isolate themselves from human sympathy; those that torture their fellow humans declare to the world that they are inhuman and deserve only ostracism; those with excessive pride fall from grace crushing their ego in the process; those that manipulate for personal gain causing undue suffering to their fellows are but tools of carnage lacking both heart and soul; and those that remain silent in the face of such inhumanity against others belong in the lowest circle of hell, frozen forever for all to see.

February 11, in all its symbolic splendour of togetherness, love and freedom, bears witness to our dreams and our hopes that humans can find happiness in accepting the brotherhood of all humankind. But that dream confronts a reality, an absolute of our experience, that a man will act to destroy another man, or lie to deceive him, or slander to discredit him, or turn from him in fear or turn love to hate on the presumption that he knows the truth concerning another man. Such behaviour is the righteous indignation of men, confirmed in illusion believed to be truth, and it corrodes the humanity that should guide all men. If the streets of Cairo have taught us anything, they have demonstrated that vigilance against those who would control out of arrogance, oppress with indifference, deceive with impunity, and humiliate without feeling, have abandoned all natural sympathies and become , in fact, non-human and must be exposed for all to see. Such vigilance unfortunately can never end.

ABOUT THE AUTHOR:  William A. Cook is a Professor of English at the University of La Verne in southern California. His most recent book is The Plight of the Palestinians published by Macmillan this past summer. He can be reached at www.drwilliamacook.com or [email protected]