St. Petersburg , Florida — Operation Desert Storm, which pushed Iraqi troops out of Kuwait but kept Saddam Hussein in power, took a huge toll on American servicemen and women.  159,705 veterans were injured or became ill, and 10,617 veterans have died of combat related injuries or illnesses since the initiation of the Gulf War during August 1990. Since the second Gulf War began, there have been another 5,884 casualties. 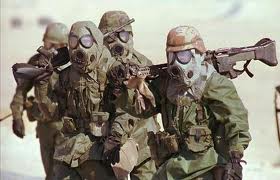 Most of the veterans we talked to for this story say they are aware when they sign their name on the dotted line, they might not come home or could be wounded. However, they say that is part of the job.  The Gulf War veterans were talked to also ask us not to identify them.

One solider trying to get help from the Veterans Administration for combat-related injuries says he has been turned down, because his records are missing. He says he has all the medical records for the time he was in the states, but the records for everything that happened outside of the country are gone.

The VA has heard similar complaints before, but a letter from Department of the Army that has never been made public before says after Desert Storm ended, units were told to destroy their records since there was no room to ship the paperwork back to the states. The letter goes on to say it was in direct contradiction to existing Army Regulations.

We showed Andrew Marshal — the regional director of the Disabled American Veterans — the letter and he said he was surprised they were told to do that and that the Army put it in writing. Marshal says, “This could have been one, five, six, a couple of hundred or this could be thousands [of soldiers]. You don’t know.”

Marshal says there should have been backups to the records destroyed in the Persian Gulf. But in the Army’s letter, it says several years after soldiers began putting in medical claims, it was discovered all records below the brigade level no longer existed. When we showed this to Marshal, he agreed some of the records could have been destroyed.

It’s not just the after-action reports that have been destroyed or are missing. Files we’ve obtained show when some veterans come to the Veterans Administration to get help for service-related disabilities, there are records to show they served, but their medical records are nowhere to be found. That means when the vets make the claims, they have to be turned down.

Another Gulf War vet told us there is no recourse and what disturbs him the most.

This Gulf War veteran served 20 years in the Army. The Veterans Administration has documentation he served in the 82nd Airborne division as an Army ranger and made 125 parachute jumps. All of his claims, including hearing loss, ankle and back injury, have been denied because efforts to obtain service medical records for all potential sources were unsuccessful. He says all his medical records are gone.

The Department of Defense does have records and sent a letter telling this same soldier that he and others in his unit were in an area where exposure to nerve agents sarin and cycolossarin was possible, but they should not worry about any bad affects.

The vet is skeptical about the claim that the nerve agent won’t harm him. “So we all got exposed to nerve agent as well, and according to the military, that is never going to affect us. They just wanted to to advise us that we’ve been exposed.”

He says when he put on the uniform, he and his fellow soldiers put their lives on the line. But they feel as if the nation is turn its back on them, now that they are home and have injuries incurred while trying to keep the country safe.

Indian Rocks Congressman Bill Young has never seen the Army letter until now. His office asking the Defense Department to look into the matter and see how many this affects.