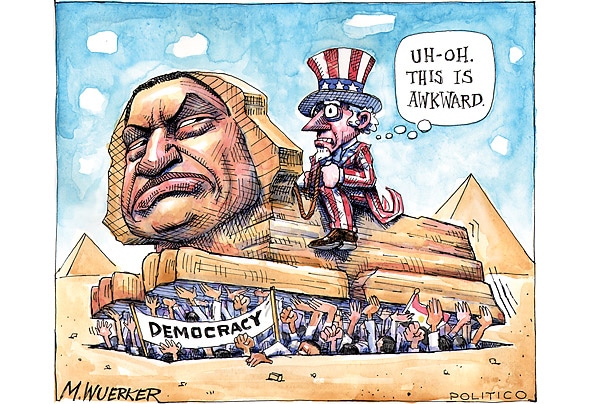 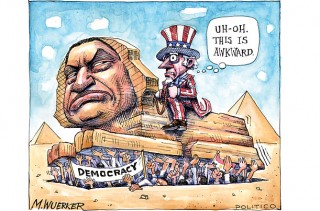 The Egyptian uprising is not only inspiring a world wide revolt against the status quo but is starkly revealing the hypocrisy of America’s foreign policy with its on going commitment to the status quo: Allen L Roland

If I was advising the leaders of the Egyptian uprising for democracy ~ I would say D’ONT STOP YOUR DEMAND FOR ACTION, DON’T LEAVE THE SQUARE AND DON’T SETTLE FOR THE STATUS QUO.

We Americans were coming from the same place in 2008 where, after suffering eight years of an oppressive Bush/Cheney agenda of rationalized dishonesty, illegal preventive wars fueled by an arrogant neoconservative doctrine and corruptive financial practices ~ we thought we were voting for CHANGE with the election of Barack Obama as president. I was one of those progressives who drank the kool aid of Obama’s promised change and I’m now one of millions who realize President Obama is not a change agent ~ Obama is obviously a maintainer of the status quo who answers to the financial elite, aka the old world order, and does not trust the voice of the people.

Obama wants it both ways where he can talk the talk of freedom while walking the walk of the old world order which controls through military power and financial manipulation.

Egypt’s current uprising is bringing this unpleasant truth to the surface of our global consciousness leaving our foreign policy in a most awkward position ~ as Obama straddles America’s decaying old world order devices of control as the people, armed by the truth, revolt and struggle to remove them.

The Nation captures this obvious hypocrisy in glowing detail ~ “The popular uprisings in Tunisia and Egypt, which have sent reverberations throughout the Arab world, reveal some uncomfortable truths about US foreign policy. The contortions of the Obama administration, caught between its desire to stand by a dictator in Cairo who has been a loyal ally and its desire to channel a revolution that could define the future of the region, are replays we have seen over and over. Rhetorically, America trumpets democracy and human rights. In reality, we ally ourselves with repressive dictatorships: Cuba’s Batista, Nicaragua’s Somoza, Chile’s Pinochet, South Africa’s apartheid regime, Iran’s shah, Indonesia’s Suharto and many more. When the people finally revolt, Washington flounders, usually concerned more about shoring up the regime than about supporting democracy… Worse, because foreign policy is dominated by our military and intelligence agencies, our ties with these regimes tend to involve deep complicity with the security services that torture and kill domestic opposition. We are widely ~ and accurately ~ viewed in much of the third world not as neutral or distant supporters of freedom but as the bulwark of dictatorships. We train their police, arm their militaries, and base our troops on their soil. American people and culture are widely admired abroad, but our government is just as widely despised.”  The Nation: Egypt Uprising Reveals Hypocrisy of US Foreign Policy. See article ~

Obama can’t have it both ways and the more he maintains the Obama Straddle ~ the more his credibility sinks throughout a world that is increasingly thirsty for the truth and true democracy.

The nation ends its excellent thought provoking article with these words ~   ” America is exceptional not because we are rich but because we were founded on a revolutionary ideal: that people have the right to govern themselves. And yet we have become a status quo nation, too often invested in maintaining oppressive power. The revolution sweeping the Middle East suggests we had better think very hard about that contradiction.”

Yes, we had better think very hard about that contradiction and be willing to follow our Egyptian brothers and sisters to the streets and voting booths to reclaim our innate revolutionary ideal as well as our morally diminished Republic.