Shinseki Pledges to Continue to be “Good Steward” of Resources

WASHINGTON – In announcing the proposed budget for the Department of Veterans Affairs (VA) during the next fiscal year, Secretary of Veterans Affairs Eric K. Shinseki emphasized “making every dollar” count in the $132 billion budget proposal for VA. 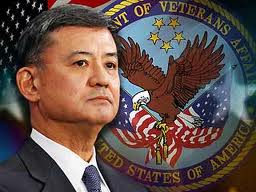 “We will continue to wisely use the funds that Congress appropriates for us to further improve the quality of life for Veterans and their families through the efficiency of our operations,” said Secretary of Veterans Affairs Eric K. Shinseki

“In the current constrained fiscal environment, every dollar counts,” Shinseki added. “We have put into place management systems and initiatives to maximize efficiency and effectiveness, and to eliminate waste.”

The budget request for the fiscal year that begins Oct. 1 must be approved by Congress before taking effect.

The budget request seeks nearly $51 billion for medical care.  It would provide care to more than 6.2 million patients, including nearly 540,000 Veterans of military operations in Iraq and Afghanistan.

The budget request also includes almost $1 billion for a contingency fund and $1.2 billion of operational improvements to manage the appropriated funds in a fiscally responsible manner.

Shinseki noted the department has created “a portfolio of initiatives” to improve the quality of VA care while making it easier for patients to access services.  Primary care providers will put more emphasis upon disease prevention and healthy living.  New technology – securing e-mails, social networking and telehealth – will be harnessed to meet the evolving needs of patients.

For example, in 2010, a daily average of more than 31,000 patients took advantage of VA’s telehome health care.  The budget proposal will allow more than 50,000 people daily to use this innovative, at-home care.

Among the department’s operational improvements is a provision that calls for VA to implement Medicare’s standard payment rates, a measure that will free $315 million for other health care needs.

Shinseki reaffirmed his commitment to “break the back of the backlog” of claims from Veterans for disability compensation and pensions.  VA’s goal is to provide Veterans with decisions on their claims within 125 days at a 98 percent accuracy rate by 2015.

Various initiatives support continued redesign of VA’s business processes and development of a paperless claims system to improve the efficiency of VA’s handling of applications for compensation and pensions.  Among the major projects is one to provide Veterans with streamlined forms to present to non-VA physicians who are evaluating Veterans for disability benefits, while another new program allows online application for claims related to exposure to Agent Orange.

The funding request includes nearly $940 million for specific programs to prevent and reduce homelessness among Veterans and their families.  This funding is a 17 percent increase over the current budget of nearly $800 million.

“Homelessness is both a housing and a health care issue,” Shinseki said. “Our 2012 budget plan supports a comprehensive approach to eliminating Veterans’ homelessness by making key investments in homeless and mental health programs.”

The requested budget for “mandatory” benefits programs includes nearly $11.5 billion for VA education, training, vocational rehabilitation and employment programs, including educational benefit programs VA administers for the Department of Defense.  Approximately 925,000 people will receive benefits under these programs.  Nearly three-quarters of the funds will go to recipients of the new Post-9/11 GI Bill.

VA will seek nearly $3.2 billion for the new fiscal year to operate and maintain its information technology (IT).

“IT is the key to bringing VA into the 21st century,” Shinseki said. “It allows for the efficient delivery of health care and benefits.”

A recent independent study found that VA invested $4 billion in medical IT from 1997 to 2007, which generated $7 billion in savings, mostly from the elimination of duplicate medical tests and the reduction of medical errors.

VA has a major role in the development of the “virtual lifetime electronic record” as part of an inter-agency federal initiative to provide complete and portable electronic health records for service members, Veterans, other family members and, eventually, all Americans.

Through a disciplined approach to IT projects, VA transformed its software development processes, meeting product delivery schedules over 80 percent of the time.

VA is consolidating its IT requirements into 15 major contracts, which will lower costs and increase oversight and accountability.  Seven of the 15 contracts are set-aside for Veteran-owned businesses, and four of those seven are reserved for small businesses owned by service-disabled Veterans.

Nearly $590 million in major construction is included within next year’s budget request.

“This reflects the department’s continued commitment to provide quality health care and benefits through improving its facilities to be modern, safe and secure for Veterans,” Shinseki said.

Also in the budget request is $550 million for minor construction for such purposes as seismic corrections, improvements for patient safety, and enhancements for access and patient privacy.

Additionally, the spending proposal includes funds for a gravesite expansion project at the National Memorial Cemetery of the Pacific in Hawaii.

VA is seeking more than $250 million next year for the operation and maintenance of its 131 national cemeteries.

The department expects to inter about 115,000 people next year at its national cemeteries.  Nearly 90 percent of the U.S. population is within 75 miles of a VA-run national cemetery or a state-run Veterans cemetery.

For the fourth consecutive time in 10 years, VA’s system of national cemeteries has bested the nation’s top corporations and other federal agencies in a prestigious, independent survey of customer satisfaction.

Further information about VA’s budget proposal for fiscal year 2012 is available on the Internet at www.va.gov/budget/products.asp.