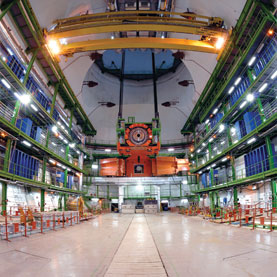 The Initial findings of the Large Hadron Collider near Geneva, Switzerland unexpectedly reveals that the emerging collision particles seem to fly in the same direction which indicates an internal structure or consciousness, which, I would claim, is a Unified Field of love and connectedness whose principle property is the universal urge to unite: Allen L Roland

The current uprisings in Egypt and the Middle East of oppressed people seeking freedom is, I would venture, the gradual surfacing of a world wide innate need to unite in a collective state of social cooperation and altruism ~ the driving force of evolution. The latest advances in science could well be revealing this very same phenomenon is the basic stuff of molecular matter.

Let’s use the latest findings of the Large Hadron Collider ( LHC ) near Switzerland as an example. Amir D. Aczel , Scientific America, reports on February 11, 2011 that Scientists at the Large Hadron Collider are trying to solve a puzzle of their own making ~ why particles sometimes fly in sync with each other: “ Last summer physicists noticed that some of the particles created by their proton collisions appeared to be synchronizing their flight paths, like flocks of birds. The findings were so bizarre that “we’ve spent all the time since [then] convincing ourselves that what we were seeing  was real,” says Guido Tonelli, a spokesperson for CMS, one of two general-purpose experiments at the LHC….The effect is subtle. When proton collisions result in the release of more than 110 new particles, the scientists found, the emerging particles seem to fly in the same direction. The high-energy collisions of protons in the LHC may be uncovering “a new deep internal structure of the initial protons,” says Frank Wilczek of the Massachusetts Institute of Technology, winner of a Nobel Prize for his explanation of the action of gluons. Or the particles may have more interconnections than scientists had realized. “At these higher energies [of the LHC], one is taking a snapshot of the proton with higher spatial and time resolution than ever before,” Wilczek says.

Wilczek is definitely on to something but I maintain it ties into Wilczek’s Nobel Prize winning work concerning Asymptotic Freedom ~ regarding the Strong Force in the atom. Let me use the findings of those recent Nobel Prize winning researchers, Politzer, Gross and Wilczek, to prove my point. They won the 2004 Nobel prize in physics for their studies of the “strong Force ” ~ the powerful and mysterious energy that holds the nuclei of atoms together. They explained the mystifying qualities of this strong force, which holds together the fundamental building blocks of nature, called QUARKS, to form protons and neutrons ~ two of the basic components of atoms.

Now, this is when it gets interesting.

Independently, they developed the theory and the mathematical equations to show that Quarks are held together by the strong force which, unlike any other force in the universe, gets stronger as the quarks get farther apart ~ a concept now known as ” Asymptotic Freedom “.

Now, here is my take on these findings as applied to my Unified Field of Love and Soul Consciousness which is ~ The basic underlying force of the universe is a psychic energy field of universal love, within which gravitational and electromagnetic fields, the strong and weak forces in the atom, and all other forces of nature, including time and space, are merely conditions of state. Within this psychic realm of love, paranormal events such as clairvoyance, telepathy, precognition and near-death experiences are also conditions of state. The principal property of this field of love is its propensity to unite, complete and fulfill all living beings within a constantly evolving loving plan. This field of love is the absolute constant of the universe in that within it, time and space do not exist. Thus, we are instantly joined with the past, present and future of a universe which is in the process of uniting, completing and fulfilling itself.

Thus, it appears that the strong force in the atom is the urge to unite which is the principle property of my Unified Field. It is the same urge to unite that Bose and Einstein found in the 1920s  when they discovered that photons ( light particles ) have a “spooky tendency”  to travel together versus acting randomly ~ which eventually led to the discovery of the laser. Einstein used his mathematical formulations to predict the behavior of large groups of atoms full of excess energy and with the potential to emit a photon. He wanted to see what would happen if a stray photon passes by the atom group ~ Lo and behold, he found that a stray photon not only stimulated the atoms to release their photons earlier they expected, but that the emitted photons then went in the same direction and at exactly the same frequency as the original stray photon !

The same urge to unite that is now being observed 90 years later with the findings of the Large Hadron Collider in Geneva, Switzerland.

It is also the same urge to unite that Teilhard de Chardin spoke of when he wrote ~ ” If there were no real propensity to unite , even at a prodigiously rudimentary level, indeed, in the molecule itself ~ it would be physically impossible for love to appear higher up in the ‘ hominized ‘ or human form .”

It is also the same urge to unite that loved ones feel when they are separated from each other ~ and the further apart the stronger the pull to be back together. But it would also explain our individual quest to reunite with our original state of soul consciousness, we all knew as children, before we retreated into a cocoon of Ego consciousness ~ which I prove every day in my leading edge heart centered work as a psychotherapist.

Since I’m a twin, I can really relate to this urge to unite when I was sometimes separated from my twin in early childhood. It is also an urge to unite that exists beyond time and space or even lifetimes as loving connections (such as my grandfather) most certainly do.

This would also seemingly explain how the urge to unite would increase as the Universe continues to expand. As such, it is a force that is stronger than Gravity!

Thus, the one constant of the universe would no longer be light at 186,000 miles per second for even light particles ( photons ) are subject to this force field of love ~ this driving urge to unite which exists not only beyond time and space but also deepest within ourselves.

And this would also explain why mankind is now in the process of uniting while we seemingly are still divided and separate from each other.

And finally, on a collective level, it would explain the power of love, altruism and social cooperation and how we can no longer resist our innate pull and urge to unite versus separate.

Then we have Mike Purton, writing in the Guardian on 12/02/04 of the greatest religious discovery of the 20th century;

” Physicists call it entanglement, and it describes the state of two or more particles once they have interacted with one another. From then on, irrespective of time and space, a correlation will always exist between them. What happens to one will affect the other – even if they are now at opposite ends of the universe …For if matter emerged from energy in the singularity of the big bang, it would seem to follow that all the particles of which it consists are in that state of correlation. They have not become entangled, but at the fundamental level they have never been – and can never be – separated. ”

In summary ~ the great dawning and, I would add, inevitable realization of psychology, science and religion is that our separateness is an illusion measured by the state of our consciousness and that our ultimate reality, once again measured by the state of our consciousness, is the realization that we are all united and part of a loving and indivisible whole ~ and we resist it at our peril.

Very young children are aware, as I was as a child, of this universal truth and consciousness which would explain Teilhard’s quote ~ ” Till the very end of time matter will always remain young, exuberant, sparkling, and new-born for those who are willing to love ”

As such, those who we love deeply become part of us forever. Starting with my twin and beloved grandfather ~ every personI have deeply loved in this lifetime, as well as in past lifetimes, still lives in my heart. A thread of love that exists beyond time and space.

Or, as Longfellow so eloquently writes, ” The thread of all sustaining beauty that runs through all and doth all unite.”

Picture, if you will, some gigantic scientist peering through his trusty microscope at you and your lover ~ someone you have chosen to spend your life with ~ and dismissing your deep soul connection and union as a mere “ spooky tendency” to want to travel together ~ as both Einstein/Bose and the Large Hadron Collider scientists have obviously done. Has this scientist seen the full picture of you? Or has he missed an important subjective part of the picture? And if so, was there a glitch in the microscope, or were his perceptions limited because of his preconceived beliefs or state of consciousness?

Clearly, our beliefs and level of consciousness as observers determines our ability to accurately comprehend what we observe. It also determines the degree to which we consciously experience the Unified Field of love. An open heart, as such, is as important for accurate scientific inquiry as is a powerful microscope ~ if not more important.

Science will surely remain one-eyed and lacking in depth-perception until it acknowledges the equal validity of subjective, sensory and spiritual experience. And it will continue to record the letter of mere mechanics, and miss the true spirit that brings it all to life, until it comes to recognize the universal urge to unite, even within the molecule itself, as being the universal attractive force of love.