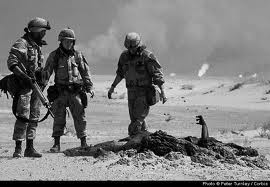 It has been 20 years and many gulf war veterans have died.  Hundreds of thousands, close to 1/2 of all gulf war veterans have made claims to the VA and they wait years for help to continue to be able to even live above the poverty level.  The war in Iraq is over and it is time for full transparency in this government and it will not happen without action by every veteran that ever served, their family members, their friends, and civilians that say they support the troops.  Time to prove it!

Sick of news coverage on Charlie Sheen and his drug meltdown and other Hollywood types that never served.  Sick of the news media not covering the troops or the veterans, this is the news story of the decades and they are controlled not to cover it.  New York Times was even told to pull an award winning journalist off the story in the late 90s!  CNN gets a story out on DU once and then it fades as fast as it showed and its producer disciplined or fired.  A Houston Coroner rules in favor of a veteran and then she is fired.

The representatives we elect do not stand up, when they know.  Congressman Shays stepped aside and let Senator Byrd carry the battle for us, Why?  Simple it is a cost budget factor that the White House Office on Budget has kept a lid on for years.  Besides the issue of reputations on our leaders that knew but did not stand up for their troops.  It is twenty years and this is a debt earned and due to the Gulf War Veterans of 1990-91.  We have hearings on the hill but little press coverage and no real action.

IT is time to get on twitter, that is a fast moving and quick thing we can do, it takes seconds of your time and if everyone would use it we would trend on the top!  Now what else how about getting those large cutout figures made up with your pictures and sent to the hill a virtual march on Washington.  How about using that camera on your phone and sending video phone public comments to hearings, elected representatives, to the media, and to the committees?  We have the technology to do so much that we as veterans are not using to the fullest potential.  Talk about a force multiplier effect!

Now here is the latest from the CIA Analyst couple that have worked the issue beside us for years!  It appeared today on the blogs of the Washington Post.  Yes the veterans are injuried and ill and getting worse.  It is imperative we stand up now while we still are breathing!  Do it for yourself, for your family member, your friend, your veteran and the current troops.  If they do it for one group history just keep repeating.

A former CIA intelligence analyst says in a new book that the agency is “sitting on” 1.5 million documents that could shed new light on the mysterious maladies that have afflicted veterans of the 1991 Persian Gulf War.

“Twenty years after these veterans were exposed to Iraqi chemical agents and other toxins, they should not have to keep begging the government they fought to defend to make this information public,” the former analyst, Patrick G. Eddington, said in an interview Wednesday in advance of next week’s publication of his book, “Long Strange Journey: An Intelligence Memoir.”

Eddington, who quit the CIA in 1996 because he felt veterans were not getting the full truth about chemical contamination, contends that the agency has continued to resist full declassification of the documents because it “risks embarrassment and condemnation from Congress and veterans if the documents show evidence of additional exposure incidents that were not investigated or followed up.”

“It’s simply wrong to suggest that the CIA hasn’t publicly released documents on Gulf War illnesses,” he said in response to a query. “In fact, such material is readily available on our Web site.”

Soon after the end of the so-called “100-hour war” that ousted Saddam Hussein’s troops from Kuwait, U.S. troops and civilians began complaining of “fatigue, headache, joint pains, sleep disturbances and memory problems,” according to a list of symptoms compiled by the Veterans Administration.

Arguments have raged for years over the causes of “Gulf War Syndrome,” including whether it was caused by blundering U.S. attacks on Iraqi chemical weapons depots.

In 1998, the agency admitted to having more than a million previously undisclosed documents on the Gulf War, including chemical weapons incidents, in a CIA inspector general’s report on allegations by Eddington and his wife, also a CIA analyst, that agency bosses had retaliated against them for their criticism.

“The amount of the data the agency admitted sitting on in 1998 is what I found staggering,” said Eddington, now an aide to Rep. Russ Holt (D-NJ), who was chairman of the House intelligence committee’s oversight panel from 2007 through 2010.

“Given how the CIA embarrassed itself 15 years ago on this issue, it’s not terribly shocking the agency would drag its feet on declassifying this material,” Eddington maintained, “but that doesn’t make it any less unconscionable.”

Despite CIA spokesman Little’s denial of Eddington’s charges, the former analyst is not backing down.

“Clearly, those 1.5 million documents are not on their Web site,” he said. “They’re trying to peddle the nonsense that, since they’ve put a pitiful handful of documents on their Web site, Gulf War Syndrome-related intelligence is ‘readily available.’”

“Just as soon as they declassify in full those 1.5 million documents and post them to CIA.gov,” he added, “I’ll be happy to acknowledge that—after nearly 15 years—they’ve taken a real step to come clean on what they know.”