Home Veterans ERIC MAY: Has Obama Ordered Violence On Veterans? 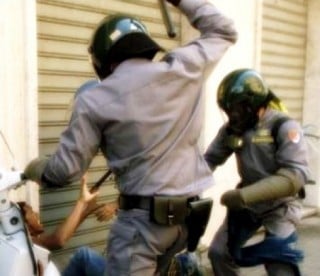 Has Obama ordered violence on veterans?

By Captain Eric H. May for VT

HOUSTON, 2/20/11 — These are tough times for Ray McGovern and me, two former Army intelligence officers who have seen better days:

Despite our connections we weren’t acquainted, but I always respected his courage and candor. I wish him a speedy recovery, and hope that he will smile with me at the zany Zionist claim that we once controlled Cindy Sheehan:

With Eric May hanging around in the early days, and Ray McGovern sliming himself all over her later on, it’s clear that people with an agenda to steer her toward the blame Israel meme attached themselves to her. They were helpful, I’m sure, appearing to provide stolid, real world perspectives amid all those crazy peace activists. And people like McGovern and May assumed the authority of “insiders”. I mean, if Israel does control the U.S., surely a CIA honcho like McGovern would know about it, right?

I can’t speak for Ray, but I never said a dozen words to Cindy Sheehan, respecting her heartbreak from a distance. Anyway, the Code Pink inner circle who ran Camp Casey didn’t care much for my military manners, although they were charmed with my dog, Dexter — and that pretty much summed up my place in the order of things.

For my part, on January 29 I was assaulted by staffers at the VA hospital in Houston. Administrators subsequently cut my access to the Internet, my veteran advocate, and the hospital police. Three days after the assault I went into a state of oxygen desaturation, lost consciousness, and almost died.

The senior respiratory therapist who saved me exclaimed to surrounding staff that the eight ounces of bloody phlegm she had extracted from my lungs was the most she had ever seen. She also said that she would like to report whoever was responsible for my close call.

One week after the assault, the police finally met my attorney and me, and their first question was why it had taken me so long to call them. After an hour of discussion with us, and some critical disclosure by informed nurses, they took a report, apologized for the hospital, and promised swift action. They have been silent for the last two weeks, however, and will not return my attorney’s calls. I suspect that the VA, which muscled and muzzled me, is pressuring its police.

I shall soon present the full story to the public as The VA in 3-D. Section 3-D is where they put quadriplegic ventilator patients like me. Although I was held incommunicado, I was able to take enough notes for an eye-opening report.

The DU debate is totally false as long as the issue of nukes is not addressed. In the Battle of Baghdad, the deaths of 3,000 US soldiers was kept secret because they were “friendly fire” nuked, along with 20,000 Iraqi soldiers engaging them. Their story is at Ghost Troop Home. As a medical doctor, I find that the DU sickness in veterans shows all the signs of regular alpha radiation illness.

Reply to a physician:

Doctor, I agree with both your historical and medical diagnoses. The Battle of Baghdad was pasted over with Jessica Lynch and jokes about Baghdad Bob. The nuke at Baghdad Airport was described by the commander of the Iraqi forces, General Al-Rawi, in a fourth-anniversary interview published by Al-Jazeera.

The Iconoclast had published the same analysis a few days earlier, independent of Al-Rawi and Al Jazeera. Three weeks later Congress held (CYA)  hearings about misinformation in the false reports about Jessica Lynch and Pat Tillman.

I was not involved in the military at the time of the Battle of Baghdad. The best story about my efforts to end the cover-up is by W. Leon Smith in his article, Captain Courageous Witnessed: Dr. Kelly Assassinated!