Home Government Hillary Clinton: Beware of the Mini Pharaoh in our own backyard

Political donation laundering-rechanneling (PDLR) is a business in its own right, whether it is for pre-election donations or post-election maintenance contributions. In most cases, PDLR requires savvy strategists and planners, quick-witted implementers, friends and enablers in high-places, and a high degree of creativity, almost to the point of being artistic. 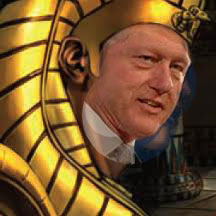 However, once in a while, an extraordinary situation may present itself, where neither imaginative planning nor creative strategy is necessary, and where limitless dollars can be channeled to Candidate A or Public Servant B or Representative C in plain sight. Really! In the PDLR world they call this the Miraculous Human Funnel. For the last ten years Former President Bill Clinton has been PDLR’s continuous miraculous funnel, and what a funnel he’s been, indeed!

Since leaving the White House in 2000, the Hillary-Bill Clinton duo have expanded their wealth by more than 100 fold to over $110 million dollars. In 2000 the Clintons left the White House an $11 million dollar debt and annual income of $358,000. But within eight years, through ‘speaking fees,’ books, and a maze of ‘mysteriously smart investments,’ the couple’s net-worth exceeded one hundred million dollars. When asked, when pressed a little (only ‘a little’ thanks to the extreme kindness of US mainstream media when it comes to the Clintons), they attribute their ‘great fortune’ to the demand for Bill Clinton as the ‘Orator Extraordinaire.’

You see, there’s always been a certain degree of demand for former US presidents’ speeches, at least for those in the last three decades, but never anything like the bewildering demand for Bill Clinton; not even close; both in terms of the dollars per speech and the quantity of invitations. But then again, there has never been a former president in a very special situation like this; one with a wife as a senator (serving on the Committee on Armed Services among others) and later as Secretary of State.

With a wife in such positions, no wonder the great demand, whether it is China or Kuwait or Columbia; whether it is Goldman Sachs or Citigroup or Sakura! Who said ‘Talk is Cheap’! The top players in the PDLR business circuit call him the ‘miracle funnel boy. Here is one example:

Many of Bill Clinton’s six-figure speeches have been made to companies whose employees and political action committees have been among Hillary Clinton’s top backers in her Senate campaigns. The New York investment giant Goldman Sachs paid him $650,000 for four speeches in recent years. Its employees and PAC have given her $270,000 since 2000 — putting it second on the list of her most generous political patrons.

The banking firm Citigroup, whose employees and PAC have been Hillary Clinton’s top source of campaign donations, with more than $320,000, paid her husband $250,000 for a speech in France in 2004. Last year, it committed $5.5 million for Clinton’s Global Initiative to help encourage entrepreneurship and financial education among the poor.

Now interestingly, two-thirds of Bill Clinton’s speaking money came from foreign sources. Somehow, outside the United States clients are willing to pay even more to hear him speak! As for the timing ofthis foreign demand intensification:

In the last nine months of 2008, Bill Clinton made at least $150,000-a-pop speaking to groups in some of the very places where his wife now will now represent American diplomacy, from India to Kuwait to China to Malaysia. In fact, the latter three speaking stops came in the last month-and-a-half of the year, as the Clinton and Obama camps were hammering out the agreement under which President Obama ultimately offered Hillary Clinton the job as top diplomat.

The National Bank of Kuwait paid Bill Clinton $350,000 for a Nov. 16 speech, while Hong Kong’s Hybrid Kenetic Automotive Holdings shelled out $300,000 for a talk Dec. 4 and a Malaysian foundation paid $200,000 for Clinton to speak the very next day in Kuala Lumpur.

The former president in 2005 helped the U.S. arm of Israel’s treasury authority sell $101 million in investment bonds by speaking at a luncheon at the Pierre Hotel in New York that was jammed with real estate executives who wanted to hear his keynote address.

Of course, the Clinton couple has been the darling of the Military Industrial Complex. Whether throughout her senate candidacy, senate residency, or presidential candidacy, the Clintons have counted on and greatly benefited from the mega corporations of the military industrial complex. You’d think with all his history (veteran, great supporter of MIC) and hawkish stand, John McCain should have gotten the largest chunk of MIC contributions during the race, right? Not so:

Senator Clinton took in $52,600, more than half of the total going to all Democrats, and a figure equaling 60 percent of the sum going to the entire GOP field. Her closest competitor for defense industry money is former Massachusetts Governor Mitt Romney (R.), who raised $32,000.In an unexpected development, Senator John McCain (R-Ariz.), the ranking Republican on the Armed Services Committee and a decorated Vietnam War veteran, raised just $19,200…

Clinton receives thousands of speaking requests a year and accepts a few hundred. Despite the extensive vetting, at least two companies that booked him were under federal investigation.

In February 2005, Clinton traveled to the Paradise Island resort in the Bahamas and collected $150,000 from Swiss biotechnology giant Serono International for a speech that touched on global AIDS. Serono’s U.S. arm was then embroiled in a well-publicized federal investigation into giveaways to doctors who unnecessarily prescribed its AIDS drug. A few months after the speech, the company pleaded guilty to two federal conspiracy charges and agreed to pay $704 million in fines.

Clinton also accepted $125,000 in December 2001 to address workers at International Profit Associates, an Illinois company that advises small businesses. At the time, IPA was the focus of a federal investigation — started during the Clinton administration — and a government lawsuit alleging widespread sexual harassment.

Like many who have paid the former president to give a speech, IPA executives have been helpful to his wife’s campaigns in New York. Her campaign and political action committee have collected nearly $150,000 in donations from the company’s officials, making IPA one of her largest single sources of campaign contributions since she ran for the Senate in 2000. The company also flew her aboard its corporate jet, according to a 2004 reimbursement item on her campaign finance report.

The other day I received an interesting comment and a valid question from the ‘other side’ of the world: “We truly appreciate your insightful and on-the-mark analyses of our Pharaoh Mubarak. Thank you for bringing Americans’ attention to issues absent in US popular media. Will you be writing about your own pharaohs and their practices, and illustrate the parallels?”

At first, I thought about it in terms of our general and ever-increasing police state practices and universally acknowledged corporate-government. However, a few days later, after a respectable friend of mine was brutalized by Hillary Clinton’s security police during her speech (right in front of her), and after spending some time researching Ms. Clinton’s government-position-induced wealth, over 100 million dollars, and that in a very short period of time, and of course her dark track record so far, it all clicked – the light bulb suddenly went on.

I was actually looking at a great example of our own little pharaoh; a mini pharaoh in our very own backyard. I know that in the past we have discussed the issues of revolving doors and corruption, and we have certainly covered neocon practices and their never-ending influence, but with this we may be looking at a new era, you may call it the extension and expansion of the neocon era; I am going to call it: The US Neo-Pharaoh Era.

The similarities and parallels between Hillary Clinton and Hosni Mubarak are uncanny. I can write pages and pages with great detail, but to make this piece readable in one session I’ll contain myself with general supported bullet points:

Do I need to say more?

Didn’t think so. So back to our friends from the ‘other side’ of the world. I hope this article answers your question. When pointing at our leaders’ hypocrisy-ridden foreign practices thus what you’ve been enduring, while providing loads of analyses on what’s been going wrong outside in your part of the world, when we criticize your dictators as dirty pharaohs, we won’t forget to look inward and take a note of our own mini pharaohs here in our own backyard. Rest assured.

This article was originally published at Boiling Frogs Post