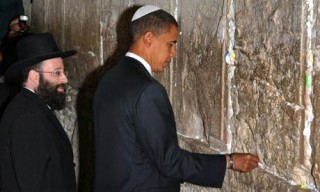 By Tommy Tucci for Veterans Today

Philadelphia, PA February 2011……. US stooge and Nobel Peace Prize laureate Obama’s singular veto against the vote of 130 countries enforces the Zionst illegal expansion of settlements on stolen land in occupied Palestine.  This act of unconditional defiance, by both US administrations for 63 years, screams out loudly that America is the greatest failed state in recorded history.  Ivy league academic and bureaucratic stooges that cannot make change for a quarter and ignore their self dignity and humanity race to “Israel is popular stop for possible Republican presidential candidates” Posted by LA Times

Global threats daily, instability, war against peace, total war against humanity emanate from six decades of superficial and illegal US/Zionist power configuration.  An outrageous illegal complicity to ignore and dismiss all humanitarian rights, property rights, and the rights of all individuals to their inherent labor, assets, and self dignity.

Mr. John Allen of Veterans Today writes in an article…”As for advancing the goal of a two-state solution, the Obama administration has done the opposite. By allowing Israel to continue its illegal settlement activities and consolidate its occupation, it, the Obama administration, has helped to guarantee that there can never be a viable Palestinian state living side by side with an Israel inside its borders as they were on the eve of the 1967 war.”

“The essence of the problem this presents can be simply stated. The Zionist lobby’s agenda – unquestioning support for Israel right or wrong – is not in America’s own best interests. (In reality it is not in anybody’s best interests including those of Israeli Jews and the Jews of the world).”  Article “Obama Veto and Impeachment” Posted by John Allen Veterans Today

Illegal Zionist handlers transfer their American stooges every failure into an alarming confirmation to the world of spectacular demise of a once proud and great nation of laws spirit value community religion and honor.

It is not the illegal Zionist self anointed victim dynamic itself which poses the real threat, but rather those who have the power to corrupt, a configuration of power to usurp a nation of laws, and who profit from the exponential compounding of misery, brutal war, confiscations of property, illegal occupations, death, destruction and theft of global labor assets and inherent self dignity.

As long as that criminal configuration and mechanism for parasitical corrupt illegal transfer remains unchecked, the threat remains of  American Imperial self imposed death and demise into a very deep grave of forgotten history.

In order to “end the massive transfer of wealth to some of the world’s most odious exporters of terrorism and fanaticism” as the ad says, perhaps we should start with these groups and the $30,000,000,000 recently extorted from U.S. taxpayers by their agents to fund the Jewish State.  Posted by Modern History Project

The greatest failed state on the planet permits interlopers and quislings to dictate a pattern of illegal government policy configuration, domestic and foreign to the detriment of ‘We the People.’  Analogous documented self admitted cold blooded murder of Americans the pretext attack on 911 in lower Manhattan and the outrageous murder of US citizens and military personal on International waters.  The sinking of the USS Liberty, and the Freedom Gaza Flotilla Ship alarms the world to the double standard ongoing unabated American failure configuration.

U.S. confirms a vote of no confidence to the entire global community.  Masses of humanity are alerted and alarmed.  The world looks on in disbelief crying out through non violent demonstrations in Egypt, Libya, Bahrain, and Palestine for dignity, peace, and humanity.   The world cries for self dignity and peace while illegal US/Zionist power configuration continues unabated with total global financial economic destruction, brutal occupations for other nations natural resources, killing and destroying in excess of 2.5 million people in Iraq, Afghanistan, and Palestine on a phony  pretext “Al-CIAduh” threat.

Simultaneously, the world looks on in disbelief as American populace is absolutely disconnected to illegal US government bureaucratic operatives and their criminal apparatus .  Notwithstanding, illegal corrupt ideologues and crime organizations circumventing all laws.   Operating above and outside the US Constitution, Articles Bill of Rights, International Law, Nuremberg Tribunals, Geneva Conventions, and United Nations mandates.

At no time in factual recorded history was the US Constitution an imaginary piece of parchment paper warehoused in a museum. The US Constitution is the strict rule of laws set in place to honor, obey, serve, protect, and respect  ‘We the People.’  ‘We the People’ who elected individuals to represent our entire Nations liberty, spirit, freedom, values,  honor, community, religions, and traditions. See video “Final Days of The Great American Empire.”

“We the People of the United States, in Order to form a more perfect Union, establish Justice, insure domestic Tranquility, provide for the common defence, promote the general Welfare, and secure the Blessings of Liberty to ourselves and our Posterity, do ordain and establish this Constitution for the United States of America.” Preamble to the US Constitution.

The American total unconditional and unparalleled, in all of recorded history, obsession of racing to serve a select exclusive special interest group that the entire whole of humanity knows is an illegal configuration.  Ideologies that work against all known spiritual law and all mans written laws in recorded history.

An unparalleled documented and self admitted obsession of serving other peoples exclusive interests and dismissing ‘We the People.’  Resulting in the last 60 years of the U.S.A  going from the greatest creditor Nation to the greatest debtor Nation and too big to failure in recorded history.

As long as the obsession enabling an unconditional criminal configuration and mechanism for parasitical corrupt illegal transfer remains unchecked, the threat is accelerated of American Imperial collapse self imposed death and demise into a very deep grave of forgotten history. Against the will and to the detriment of global humanity and ‘We the People.’