Home World Gaddafi Raved and Cursed, but he Faces Forces he Cannot Control 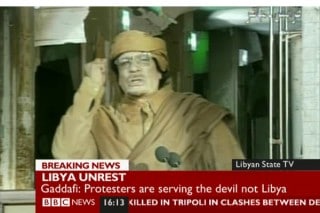 “I will die as a martyr,” Gaddafi said last night. Almost certainly true.

by Robert Fisk”— The Independent

So let’s erase all the YouTubes and Facebooks and the shooting and blood and gouged corpses from Benghazi, and pretend it didn’t happen. Let’s pretend that the refusal to give visas to foreign correspondents has actually prevented us from hearing the truth. Gaddafi’s claim that the protesters in Libya – the millions of demonstrators – “want to turn Libya into an Islamic state” is exactly the same nonsense that Mubarak peddled before the end in Egypt, the very same nonsense that Obama and La Clinton have suggested. Indeed, there were times last night when Gaddafi – in his vengefulness, his contempt for Arabs, for his own people – began to sound very like the speeches of Benjamin Netanyahu. Was there some contact between these two rogues, one wondered, that we didn’t know about?

In many ways, Gaddafi’s ravings were those of an old man, his fantasies about his enemies – “rats who have taken tablets” who included “agents of Bin Laden” – were as disorganised as the scribbled notes on the piece of paper he held in his right hand, let alone the green-covered volume of laws from which he kept quoting. It was not about love. It was about the threat of execution. “Damn those” trying to stir unrest against Libya. It was a plot, an international conspiracy. “Your children are dying – but for what?” He would fight “until the last drop of my blood with the Libyan people is behind me”. America was the enemy (much talk of Fallujah), Israel was the enemy, Sadat was an enemy, colonial fascist Italy was the enemy. Among the heroes and friends was Gaddafi’s grandfather, “who fell a martyr in 1911” against the Italian enemy.

Dressed in brown burnous and cap and gown, Gaddafi’s appearance last night raised some odd questions. Having kept the international media – the “dogs” in question – out of Libya, he allowed the world to observe a crazed nation: YouTube and blogs of terrible violence versus state television pictures of an entirely unhinged dictator justifying what he had either not seen on YouTube or hadn’t been shown. And there’s an interesting question here: dictators and princes who let the international press into their countries – Messrs Ben Ali/Mubarak/Saleh/Prince Salman – are permitting it to film their own humiliation. Their reward is painful indeed. But sultans like Gaddafi who keep the journos out fare little different.

The hand-held immediacy of the mobile phone, the intimacy of sound and the crack of gunfire are in some ways more compelling than the edited, digital film of the networks. Exactly the same happened in Gaza when the Israelis decided, Gaddafi-like, to keep foreign journalists out of their 2009 bloodletting: the bloggers and YouTubers (and Al Jazeera) simply gave us a reality we didn’t normally experience from the “professional” satellite boys. Perhaps, in the end, it takes a dictator with his own monopoly on cameras to tell the truth. “I will die as a martyr,” Gaddafi said last night. Almost certainly true.

About the Author: Robert Fisk is a veteran  British Journalist, based in Beirut, who currently serves as a Middle East correspondent for The Independent newspaper in London.

His recent articles bear titles such as “The US forces, like the Crusaders before them, are prisoners in their own fortresses”; and “In Middle Eastern elections, no one bats an eyelid when the leader gets 110 per cent of the vote” which begins, “Democracy. Ah, how the Middle East would love to have some democracy! On the supermarket shelf – and I can assure you, there are plenty of supermarkets in the Middle East – a couple of boxes of democracy would be a good buy, along with three boxes of human rights and four boxes of justice.” [read more]