Home Veterans TIME FOR AMERICANS TO FACE THE TRUTH (VIDEO) 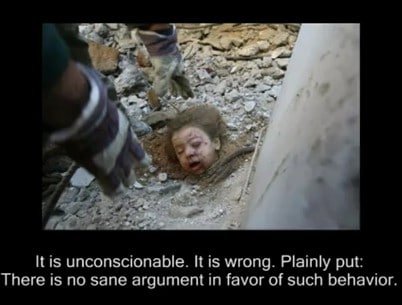 Video:  By Joe Mowry and Tony Lawson (of Veterans Today)

Few Americans remember Operation Cast Lead.  Jews in America were told Israel had to finish off Hamas in order to protect itself.  We can’t get into exactly how fanciful and utterly false everything American Jews are told or even the childishly ignorant statements President Obama and Secretary Clinton make on a regular basis.  They make me cringe.  They should make all of us here in America ashamed, Jews and non-Jews alike.

Every TV show that presents Palestinians as terrorists is the same.  Wait for the credits.  The people who are responsible for the devastation and butchery that you will see in this video, made these television shows.  Israeli-Americans produce up to 400 TV shows each year with absurd racist depictions of Muslims, cartoonish propaganda meant to terrorize and mislead and cover their tracks.

American sponsors, automobile companies, soft drinks, sexual enhancement products finance this propaganda.  Everyone involved knows they are doing something wrong but they do it anyway.  We call this a “double standard.”  What it is, more accurately, is complicity in war crimes.

Former President George W. Bush can no longer travel outside the United States for fear of arrest nor can many members of his administration.  The reason is that they face arrest for war crimes. Is Gaza about war crimes? You decide.  Others have been talking but money and power drowns them out.  Those who speak out lose their jobs as with  Helen Thomas or become ill and die under mysterious circumstances.

Those who lie, the media, our politicians, our pundits,  get stem cell treatments in Israel, their companies get fat contracts, their TV shows get huge sponsors, great time slots and can never be cancelled.  Their internet sights get top ratings from Google and are never hacked.

Write a book that endorses the lie and watch it go “best seller” before it hits print.

What Israel is doing, we are told from so many places today, not just the Middle East, but Europe, Canada, Australia, is “just like Hitler and the Nazis.”

Watch this and start to be an American, “walk the walk.” Do something, don’t just talk, don’t just sit and complain and, especially, stop watching television and reading newspapers.  What kind of people actually pay money to be lied to?

Then ask questions, why are we hunting Osama bin Laden when he died in 2001.  Check on this please.  Even Fox News says 9/11 was an inside job.  Why isn’t there an investigation?  Who has the power to keep covering it up even when it managed, nearly a decade later, to get on mainstream news?  You didn’t see it?  It was there, just the same and is all over the internet.  Check the Jesse Ventura story as well.

All this means one more thing.  Not only is America supplying weapons that Israel uses to bomb a concentration camp where 800,000 people live behind barbed wire and machinegun towers, what we are doing in Afghanistan and Iraq, what most Americans no longer believe is morally correct and was certainly never legal, is still going on and only a few people are standing up and saying “no.”

This is because Americans are fighting a war of aggression on behalf of the State of Israel.  Why is 9/11 being covered up, even after Fox News proved it was an “inside job?”

As former Soviet intelligence officer Dimitri Khalezov told me a few days ago:

“On September 12, 2001, I had breakfast with Mike Harari, Operations Chief of Israel’s Mossad.  Harari had his 16 year old son with him.  He asked me to pick up bottles of wine as it was a celebration of a successful operation.  That operation was 9/11.”

In 2007, the FBI flew a team to Bangkok to meet with Dimitri.  He says the privately admitted to knowing Israel’s role in 9/11.  Dimitri Khalezov has volunteered to take a lie detector test.  Fox News has an audio tape of Khalezov’s two hour debriefing on this.

Let us see if they have the courage to go this far.