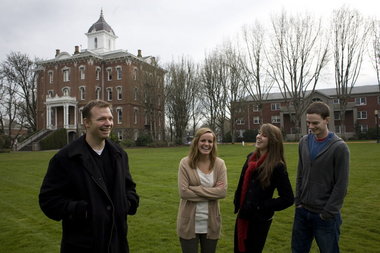 Nearly two decades before the Linfield College students were even born, the Vietnam War had ended, closing a wrenching chapter of American history as distant from their reality as the draft.

But since fall, the 12 students in Patrick Cottrell’s political science course at the small private McMinnville college have reached back in time and connected with survivors from both sides.

They interviewed American veterans and heard tales of horror and inspiration. Then, they traveled to Hanoi and Ho Chi Minh City, formerly Saigon. They floated down the Mekong Delta. They interviewed a veteran from North Vietnam.

And they came away changed, Cottrell says.

His course title, “From Colonialism to Globalism: Political Change in Southeast Asia from World War II to the Present,” seemed the typical dry, academic journey through textbooks and writings.

Instead, it is one of 14 courses Linfield offers between semesters each January to immerse students in learning elsewhere in the United States or abroad – to venture beyond lectures into the real world, whether studying health care in China or philosophy in Russia or the war in Vietnam. Cottrell’s students paid an extra $5,500 to travel to Vietnam and Thailand.

He hoped his class would personalize war and its consequences because the best way to learn history, Cottrell believes, is to talk to those who lived it. 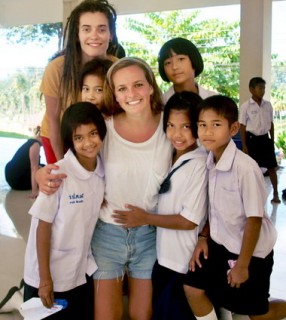 He then had to explain to the kid that he could not take care of him, and then he could never see him again. …It made me question the point of war and why it exists.

Michael Jones arrived in Vietnam in 1969 as a Marine infantry engineer from Oregon. He earned the nickname “tunnel rat” for all the underground passages he crawled through to ferret out the enemy. His unit suffered so many losses that he was promoted to corporal and then squad leader.

One day, a boy named Luong about 8 to 10 years old showed up, no one knows from where, in one of his squad’s trucks. Jones took the boy under his wing for a couple of months before officers ordered him to take the child to a local orphanage.

The boy immediately escaped and returned to the base. Jones, by then deeply attached, returned Luong to the orphanage. If he ever came back to the base, the soldier warned Luong, the youth would spend 50 years in jail. He never saw the boy again.

More than 40 years later, Linfield student McHenry was deeply moved by Jones’ story and “incredible sacrifices” on both sides of the war. McHenry got something from the soldier that “you can’t get out of a book,” Jones says.

“This is about the best kind of education we can give folks.”

The North Vietnamese charged him with a machete and cut him from his chin all along the side of his neck…He summed up our interview with a simple statement: “I was neither a coward nor a hero; I was a good employee.”

The Linfield political science students compared their interviews with American veterans. Some vets said the war could have been won with more commitment; others concluded it was a costly mistake. But every vet had a riveting tale .

Morgan Christiansen, 19, a political science major, says the soldier she interviewed was sure he would die in Vietnam.

“You don’t know what time of the day it is, or even what day it is,” he told her. “Everything becomes a mush. Nothing matters when life is a firefight.”

She was especially disturbed to learn that opponents of the war chastised some soldiers when they returned.

“That is one of the most shameful parts of the war,” she says. “We can’t ever treat people who serve our country like that again.” 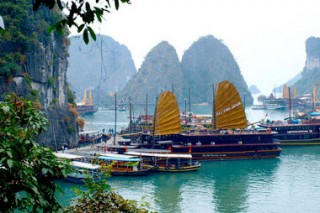 He was a revolutionary fighter during the French colonial war, a commander for the North during the Vietnam War, a high level communist state official until two years ago. ..(When he described his commander duties), I was expecting an explanation about gun techniques and grenades, but it never came. He explained that if you know your convictions, your actions will follow.”
– Sophomore Bridget Grant’s reflections on meeting Mr. Huang, veteran of the “American War.”

The students were apprehensive about going to a communist country controlled by former enemies of the United States. “Why would you want to go to Vietnam?” friends repeatedly asked. But they found a changed Vietnam.

What the Vietnamese call the American War is a distant memory.  More than 60 percent of the population was  born after the war. Polls show the vast majority like Americans, which fits what the Linfield students experienced.

Before teaching, Cottrell, 37, worked with the U.S. State Department. Through those connections, he arranged meetings with senior political officers, including the Deputy Chief of Mission at the U.S. Embassy in Hanoi and the regional director of the World Bank.

Machine gun fire had ripped through his airplane’s right engine. He and his crew jettisoned non-essential cargo over the South China Sea and then flew for their air base on the Mekong River Delta. The engine spewed fire as they flew 25 feet above the water to a safe landing.

In Vietnam, Grant thought about the pilot as she and her classmates floated on an overnight boat trip down the Mekong. She says she now sees the world “through a bigger lens.”

Students say their trip and interviews did not get them to the truth about the war so much as it helped them appreciate how complex the truth is.

Just like 40 years ago, there are many truths, they say