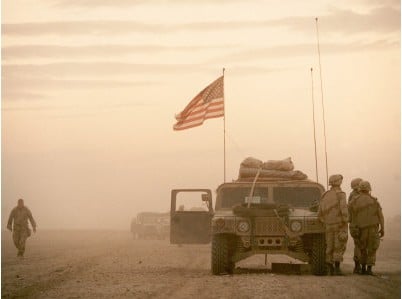 By James A. Bunker for Veterans Today

Twenty years ago this country’s best men and women were engaged in combat with the forces of Saddam Hussein after his August 2nd, 1990 invasion of Kuwait.  In February 1991, my men and I knew we had what it would take to liberate the people of Kuwait.  We had years of training and good leaders in our chain of command, as did many of the other units in the U.S. Army.  We were confident in our combat capabilities, yet we had great concern about the prospect of having to face the chemical weaponry that we knew Iraq possessed.  For weeks before the ground phase of Operation Desert Storm began, the prevailing winds had been blowing out of Iraq.  We prayed that on G-day the winds would turn in our favor and blow back in the direction of Saddam’s forces.  This we hoped would minimize the chances that the Iraqi Army would use their massive chemical stockpiles against us.

Due to our superior training, our well-seasoned and courageous leaders, and our overwhelming firepower, the ground phase of Desert Storm lasted less than four days.  As the guns fell quiet and Saddam’s remaining forces high-tailed it back to Baghdad, many of our soldiers started to show signs of illness.  No one knew what was causing this unusual medical phenomenon.  Our higher Headquarters suggested that the illnesses might be the result of the desert heat; but my Battalion Commander knew this was not the case because the temperature was in fact quite mild; less than 90 degrees.  For someone like myself; born and raised in Kansas, 90 degrees is a bit on the chilly side.  Beyond the suggestions that our troops were ill because of the heat, no one gave much thought to the possibility that the Iraqi chemical ammunition stockpiles that were being destroyed by U.S. forces not far away might be the source of our ills.

Our brave warriors came home from the Persian Gulf War to an unprecedented hero’s welcome; but it wasn’t long before news reports began to document a mysterious illness plaguing many of these American heroes.  Men and women who had previously enjoyed robust health and exceptional physical fitness were suddenly victims of unexplained skin rashes, joint pain, debilitating fatigue, and a host of other very odd health-related problems that even the most highly trained medical professionals were unable to diagnose.

As more and more ailing Persian Gulf War Veterans began to come forward and share their stories it became clear that one of the most common factors that nearly everyone could relate to were the significant number of “false” chemical alarms that had activated in theater.  Persian Gulf War Veterans from virtually all branches of the military have described how these highly sophisticated devices kept going into alarm mode, to the point that finally USCENTCOM passed the word that our troops were to unmask and disregard the alarms.  According to higher headquarters, the NBC alarms were malfunctioning and the alarms were “false”.

In 1993 many of us worked with members of Congress to get the first bill passed to provide compensation to Veterans suffering from Gulf War Illnesses (GWI).  Public Law 103-446, enacted in 1994, authorized the Department of Veterans Affairs (VA) to pay disability compensation to disabled Persian Gulf War Veterans suffering from undiagnosed illnesses.  Despite the new law few Veterans saw any relief because of the prevailing attitudes of those in the Veterans Benefits Administration (VBA).  VBA did not and still does not like to grant service connection for GWI.  Despite clear direction by Congress and the President, skepticism continues to abound within the VBA.  Many of the Veterans Affairs Regional Offices (RO) actually go out of their way to deny GWI claims.

In 1997, we again worked with Congress to amend the law in the hopes it would help our ailing Persian Gulf War Veterans.  The changes helped some, but not many.  The most recent change came in 2002 when we were successful in adding Chronic Fatigue Syndrome (CFS), Fibromyalgia (FM), and Irritable Bowel Syndrome (IBS) to the list of “undiagnosed illnesses” that were to be considered “presumptive” to service in the Persian Gulf War.  Yet to this day thousands of Veterans continue to have their claims denied despite clear and convincing medical opinion that they are indeed suffering.

Today I see many claims denied for reasons such as; “your claim cannot be granted under the undiagnosed illness provision as you have a diagnosis.” For example; if a Veteran is told by their doctor that he or she has Chronic Fatigue Syndrome, even though that illness is now clearly defined in the law as an “undiagnosed illness” many VBA Claims Adjudicators ignore the law and deny the Veteran’s claim.  In many cases Veterans have had to fight this kind of injustice all the way to the Court of Veterans Appeals (COVA), which typically takes years.  COVA cases that have already clarified and corrected these mishandled claims should have served to prevent these same mistakes from repeating with other Veteran’s claims but sadly it continues to occur on a regular basis.

A common error among many VBA Claims Adjudicators is when a Veteran files a claim based upon the “presumptive” provision in the law (e.g. GWI), yet the Claims Adjudicator  processes the claim as if the Veteran is requesting direct service-connection for the illness.  There is a clear difference between an illness or injury that is directly related to military service versus an illness that is supposed to be treated as “presumptive” under the law.  I have assisted quite a few Veterans in reopening their claims because of this common error made by VBA.  Some of these cases go back as far as 1998, while others are more recent.

Currently the “presumptive” period for GWI is set to expire on December 31, 2011.  In order to be considered “presumptive” for GWI the Veteran must show signs and symptoms of one or more of the conditions listed in the law for a continuous period of six months or more, and be severe enough to warrant a disability rating of ten percent (10%) or greater.

A Persian Gulf War Veteran came to me not long ago asking for help with his claim for CFS which had recently been denied by VBA.  The Veteran had not been able to work for the past three years because of his CFS yet had already been approved for Social Security Disability compensation.  Nevertheless, the VBA Claims Adjudicator denied the Veteran’s claim. The reason for denial?  The Claims Adjudicator stated that the CFS had to have started while the Veteran was still in the service.  The Claims Adjudicator clearly failed to follow the law on this Veterans claim.  It’s simple; if a Persian Gulf War Veteran has FM, CFS, and/or IBS and it meets the 10% rating level, the law states it is presumed to be related to the Veteran’s service in the Persian Gulf War and that the Veteran is to be awarded service connected for the illness.  GWI claims are not hard to do if the VBA would get the Claims Adjudicators to follow the law correctly and to get past their own personal feelings and bias concerning GWI.

I have worked with hundreds of Persian Gulf War Veterans this past year and I have seen many injustices perpetrated on these American patriots.  Some of the time the injustices result from a Claims Adjudicator’s personal bias, and other times the denial results from a lack of training on the part of VBA.  Sadly, when new Claims Adjudicators come aboard VBA, very often they are trained by more tenured Claims Adjudicators who themselves are uniformed as to the most recent provisions of the law concerning presumptive conditions for Persian Gulf War Veterans.

Last year Secretary of Veterans Affairs Eric Shinseki made a promise to reopen all of the Gulf War Illness claims that had previously been denied in order to ensure that none of these Veterans are disenfranchised.  Then, just one month later the VA’s Chief of Staff, John R. Gingrich told a group of Persian Gulf Veterans that the VA cannot reopen claims on their own accord.  Mr. Gingrich clarified that it is the Veteran’s responsibility to request that their claim be reopened, not the VA.

I would like to ask the Secretary why it is that the VA is currently reopening Agent Orange claims on their own initiative, yet they say that they can’t do the same for Gulf War Illness claims?  Mr. Secretary; your promise to Persian Gulf War Veterans is now beginning to look like just another in a series of broken promises that VA has made to Persian Gulf War Veterans over the last several years.  And how much longer will we have to fight to get VA physicians on staff who are properly trained to recognize the conditions and symptoms that are by law to be considered related to service in the Persian Gulf War?

Instead of VA physicians who dismiss these symptoms as psychosomatic, as happens so often in the Tampa, Florida and Fayetteville, North Carolina VA Medical Centers, let’s get physicians in there who understand what Gulf War Illnesses are, and what Congress has directed them to do for Veterans suffering from these debilitating conditions.