“You may fly over a land forever, you may bomb it, atomize it, pulverize it clean of life-but if you desire to defend it, and keep it for civilization, you must do this on the ground, the way the Roman Legions did, by putting your young men in the mud!” (T.R. Fehrenbach. This kind of War, 1963)

Warfare 1. The waging of war; armed conflict. 2. Conflict of any kind; struggle, strife or warfare – noun. 1. The process of military struggle between two nations or groups of nations; war. 2. Armed conflict between two massed enemies, armies or the like. 3. Conflict, especially when vicious and unrelenting, between, political rivals etc. Many people in America delight in insulting, criticizing, demeaning, degrading and in engaging in anti-military and anti-American behavior on a continuing basis.

People and organizations in America [and in other countries] that delight in demeaning Soldiers, Sailors, Marines, Airmen and CoastGuardsmen include:

The clownish organization Code Pink – blocks entrances to Marine Recruiting Stations with the approval of local units of government. Vietnam Veterans Against the War writes on their website: “VVAW respects … service members who … refused deployment. We hope … to bring a … end to this shameful chapter of our history. United for Peace & Justice posts ‘Ask Congress TODAY to Cut Military Budget”. A “Peace Solider project” is being touted by whynotpeace!” “No governments no war” is promoted on the Anarchy.net website. Another website claims Women United for Peace, Feminists and Other Activists Against War, and NOW’s Progressive Feminist Addenda for Peace and many other women’s peace organization have an answer for prevention of warfare.

Not once since the anti-Military days of Vietnam era left wing protests has one word of support been said of the line Soldier or Marine regarding – providing them with the weapons, personnel and national commitment to allow them to conquer the enemy and end the horror. Many of the wounded from America’s current wars has told me: “If you do not support our mission, you do not support us!” I share this view. Talk is so very cheap.

Warfare breaks down to men in rifle squads. * “The mission of the Marine Rifle Squad is to locate, close with, and destroy the enemy by fire and maneuver, or to repel the enemy’s assault by fire and close combat.” Marines kill the enemy by shooting them with machine guns, rifles, shotguns and semi-automatic pistols, blowing the apart with hand grenades, 40mm tube launched grenades, stabbing them to death with K-Bars, Fairbarins and bayonets, rocks, fists, ammo cans, belts, any item can be converted to a weapon than can bludgeon a man to death or strangle him! Indirect weapons systems including mortars, artillery and naval gunfire are used to mass large-scale explosives in mass against the enemy. Fixed and rotary winged tactical and strategic aircraft provide additional killing power to the rifle squad. The same holds true for United States Army Infantry Squads.

Rifle squads exist to project national policy. Each squad has two or three fire teams in it. There are between three or four squads in a rifle company. An infantry battalion has three (sometimes four)-rifle companies in it. * There are three infantry battalions in a regiment or brigade. An infantry division may have three (or four) brigades within its command. A crop contains two divisions and the system moves up to theater and army level in terms of organization. The essential element is the fire team/rifle squad. Warfare breaks-down to young men killing other young men and being killed by them. The conditions where the killing occurs is often filthy, uncomfortable, hot, freezing, rainy, snowing, windy, hurricane force winds, calm winds under any condition of possible weather extreme or terrain (geographic feature, i.e. hills, mountains, triple canopy tropical rain forest etc.)

The whole affair has been going on since people have been on the earth. It is not going to end. There are very well intended, legitimate, well-organized and competent entities that promote peace and pursue peace. They must not be confused with RABID anti-American and anti-Military characters. The characters abound in our free society and must, of course be tolerated. The First Amendment is theirs too. What the well-intentioned peace advocates (and the characters) does not understand is the rifle squad functions as individuals with a massive military structure. This structure has values that separate it from the civilians’ world. Our country’s military structure includes missions. I quoted the squads’ mission above. Service missions or tasks include: 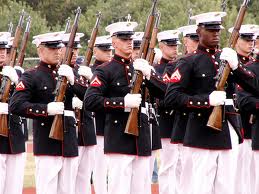 “Since 1775 the United States Marine Corp has been doing two things. Making Marines and wining battles.” Mission specific focus includes: “shall, at any time, be liable to do duty in the forts and garrisons of the United States, on the seacoast, or any other duty on shore, as the President, at his discretion, shall direct.”

United States Army:
“…The Army is Soldiers. No matte how much the tools of warfare improve, it is Soldiers who use them to accomplish their mission. [The] Army organizes, equips, and trains forces for the conduct of prompt and sustained combat operations on land.” Further: “The Army’s primary mission is to provide necessary forces and capabilities to the combatant Commanders in support of the National Security and Defense Strategies.”

United States Navy
“The mission of the Navy is to maintain, train and equip combat-ready Naval forces capable of winning wars, deterring aggression and maintaining freedom of the seas.”

United States Coast Guard
The U.S. Coast Guard mission is to protect the public, the environment, and U.S. economic interests – in the Nation’s ports and waterways, along the coast, on international waters, or in any maritime region as required to support national security.

Men with rifles implement national policy. Men that move forward no matter what is in front of them. They do not blindly charge fixed enemy positions. Nor are they fanatics. They are very competent, dedicated and decent men these Infantrymen who we owe so much to.

Remember them. The Mud Marine and the Line Grunt – they are the best our country has. They’ve never let us down, nor will they. March in parades chanting “Down with…” or “Out of…” or “Peace now…” or “We hate…?” Sometimes the Grunts react. Most of the time they really don’t care. They simply want to complete their duty at go home.

Peace, yes. My best wishes for success to peacemakers. I wish you every good thing in your attempts to halt slaughter. If your efforts fail and civilians decide on war – get out of the way and let it be concluded, quickly. Less suffering will occur and the Military can begin to get ready for the next war. Civilians will – I am very confident always find another war for us to fight. Good for promotion however. Nothing like combat experience and command to climb the promotion ladder.