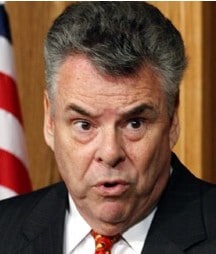 Say No To Peter King!

By Mahmoud El-Yousseph for Veterans Today

US Rep. Peter King owes his rise for his political career to his own support for a foreign terrorist group. He accuses Muslims in America of supporting terrorism, not loyal or patriotic citizens and implied in a recent interview that Muslims are not truly Americans.

This coming from a former cheerleader, confidant and friend to the leaders of one of Europe’s bloodiest and most violent terrorist groups, namely the Irish Republican Army better know as the[IRA]. He is the last person who should be trying to paint Muslims , or anyone else, with a terrorist brush

To create ill will for Americas’ Muslims and divert the public’s attention from his long history of supporting terrorism abroad, the new Chairman of Home Land Security Committee in Congress, Rep. Peter King [R-N.Y.] is holding a hearing on alleged ” radicalization of Muslims” on the week of March 7th.

Tracking down Peter King’s Mickey Mouse Hearing for the last two month, I have learned pretty interesting and amazing stuff. First of all the so called “alleged Muslim radicalization” is bogus and only intended to feed the hungry Muslim-bashers. Had Mr. King been genuine about our home front, he should have engaged and reached out to Muslim leaders, instead of referring to them recklessly as, “the enemy amongst us.”

So, why isn’t Mr.King inviting law enforcement officials and anti terrorism task force to testify? He claimed in a recent Fox News interview that, “they are too busy or scared.” I say, Bologna! Fact is, FBI Director Robert Mueller who is the Chief law enforcement official in the US has told the Senate Judiciary Committee two years ago that “Muslim and Arab communities have been tremendously supportive and worked very closely with [the FBI] in a number of instance around the country.”

According to FBI statistics, 150,000 Americans were murdered since 9/11. Among those, 33 were killed by Muslims. Statistically speaking. there were 3 people killed/year. Not to diminish this, because one victim is too many. So, why is other act of terror or violence that are not Muslim related is not being investigated by Mr. King ?

On Jan 27, 2011 in an article titled “Terrorist are not just Muslims” Rep. Bennie Thomspon [D-MI] who is King’s predecessor stated, ” when state law enforcement were asked to identify terror groups in their states, Muslim extremist groups ranked 11th on a list of 18.”

It is also worth nothing here that recent study reveals that 38 out of 120 attempted terror plot since 9/11 that involved Muslims were foild by either Muslim parents, mosque leaders or simply a friend on Facebook

So, why did Mr. King refused to investigate or conviently ignored other act of terror committed on US soul that was not Muslim related? Aren’t they are equally worthy of investigation? Here is three examples of most recent one:

It is well know fact that Mr. King is the only law US lawmaker on record to raise fund to a foreign terrorist organization. The money went to straight to now embattled Libyan leader, Qaddafi, Qaddafi in turn provided the IRA with bombs and explosive. Qaddafi’s main reason was to settle a score with Margret Thatcher for allowing US jets to attack Libya in 1985 from US bases in the UK.

It is fascinating to read a story by Ed Moloney in the February 19, 2011 issue of The Irish Times on King’s hearing. The report reveals who Peter King really is. The story’s first paragraph sums it all up, by stating, ” NOT SO many years ago the BBC banned him from the airwaves for his terrorist sympathies, a judge threw him out of a Belfast court because he was a “collaborator” with the terrorists on trial, and the FBI was opening his mail because of his views. The US secret service once listed him as a threat during a presidential visit to his neighborhood.”

Finally, if Rep. King have his way, he will introduce a law requiring every Muslim in America to wear a GPS tracking bracelet at all times.” He will even propose that the government bug Muslims in their homes, work and place of worship. May be even opening interment camps.

That said, this retired Muslim veteran and a father of former US soldier urge every red-blooded American to reject this witch hunt hearing and to say no to Peter King.