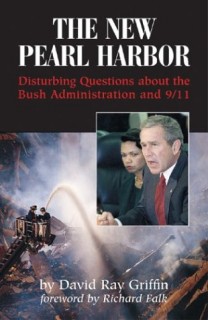 Then in 2008, Griffin published The New Pearl Harbor Revisited, an update of his original study in which he said: “The exposŽ of what happened on 9/11 has shown virtually every dimension of the official account of 9/11 to be false beyond a reasonable doubt.”

Forget about conspiracy theories. How can we allow falsifications lapse into history without demanding the truth?

It’s past time to demand honest answers to the questions generated by the official story.

Based on his continuing studies, Griffin compiled 21 reasons to question the official story about the terrorist attacks of September 11, 2001.

Here I have summarised his 21 points that challenge the official stories:

1. The official story has Osama Bin Laden behind the attacks. However, the FBI “has no hard evidence connecting him to 9/11″

2. Alleged hijackers who regularly drank heavily, went to strip clubs, and paid for sex could hardly be devout Muslims

3. Claims that passengers on airlines made mobile phone calls to relatives has been contradicted by the FBI

5. Reported evidence for Muslim hijackers shows clear signs of having been fabricated

6. The story that incriminating evidence was found in alleged hijacker Mohammed Atta’s luggage was a revision of the original story

7. Planes showing signs of in-flight emergencies are normally intercepted within about 10 minutes. The military’s failure implies something prevented this standard procedure

8. Then Vice-President Dick Cheney, while in the bunker under the White House, apparently confirmed a stand-down order prior to the strike on the Pentagon

9. The 9/11 Commission removed a report from video records of its hearings about when he entered the shelter conference room

10. The commission’s timeline for Cheney contradicts what he told “Meet the Press”

11. Hani Hanjour, who could not safely fly even a single-engine plane, could not possibly have executed the trajectory reportedly taken by American Flight 77 hitting Wedge 1 of the Pentagon

12. Wedge 1 would have been the least likely part of the Pentagon to be targeted by foreign terrorists

13. Claims by Pentagon officials that they did not have the premises evacuated because they had no way of knowing an aircraft was approaching it were false

14. Why would the Secret Service allow President Bush to remain in a Florida classroom for 30 minutes after news of attack?

15. On the first anniversary of 9/11, the White House started lying about Bush immediately leaving the classroom

16. The official explanation of the destruction of the Twin Towers and WTC 7 (a nearby building that also collapsed) contradicts all prior history: steel-frame high-rise buildings have never collapsed except when brought down by controlled demolition.

18. The destruction of the towers can only be explained in terms of powerful explosives. The fires could not have come within 1,000 degrees Fahrenheit needed to melt steel.

19. Then New York mayor Rudy Guliani allegedly falsified stories about knowing the WTC buildings were going to collapse. His fire chiefs didn’t expect them to come down.

20. The National Institute of Standards and Technology has repeatedly postponed its report into the collapse of WTC 7.

ABOUT THE AUTHOR: Paul J. Balles is a retired American university professor and freelance writer who has lived in the Middle East for many years. He’s a weekly Op-Ed columnist for the GULF DAILY NEWS . Dr. Balles is also Editorial Consultant for Red House Marketing and a regular contributor to Bahrain This Month. This article first appeared in Gulf Daily