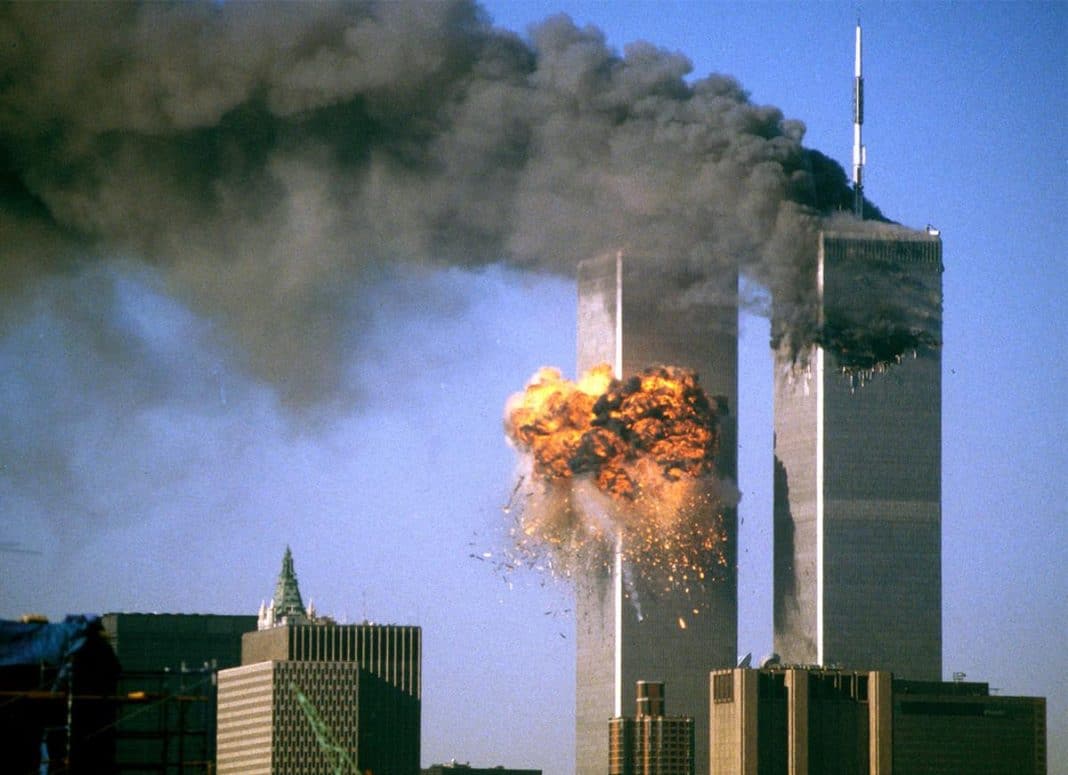 The original report by the National Institute of Standards, describing the destruction of the World Trade Center as resulting from heat from jet fuel fires, a relatively low-temperature source of short duration, weakening hundreds of tons of steel, even turning much of it molten as films show, is simply silly.

There is more than minor evidence that the report, now rejected as outlandish by hundreds of architects and scientists, was a “whitewash” and is, in itself traced to members of the Bush administration believed complicit in a very real conspiracy.

Under any normal circumstances, such individuals would have had to prove their innocence in a court of law.  Such processes, law, justice and such ended on 9/11.

The remaining questions are how three buildings, one with only slight damage, didn’t just burn for days, leaving massive twisted towers but virtually disappeared.  Nothing in the official report remotely addresses this.

Thus, we are left with theories.

“True patriotism hates injustice in its own land more than anywhere else.” —Clarence Darrow

Perhaps a more important issue is why the “how” has become the only focus of the most massive controversy and “sea of speculation” in history while discussion of who is relegated to the oft-spoken mouthings of “Bush-Cheney” or “Israel did it.”

History has left us vast evidence of conspiracy, enough evidence of treason around the invasion of Iraq itself to clean half of Washington out, not just prison but real treason, executions, however, we do it now, hanging, electrocution, big names, “French Revolution” stuff.

“Off with their heads!”

Instead, the dialog, the controversy, relegated to the independent or alternative news, is dominated by the magic word “nano-thermite.”

We return to the basics here.  Why are we asking “how,” asking it over and over, even deciding on a solution, an elegant one with lots of prestigious people behind it, scientific journals, peer-reviewed papers and such and there is virtually nothing about “who?”

I am not going to explain “nano-thermite.”  My own inquiries led me to our top-secret weapons labs where I get only rumors that a substance, originally designed as a propellant, first for rocket engines, then for experimental battlefield weapons, has an application for dissolving steel.

Old style thermite is the stuff we see in the war movies, canister grenades left on enemy cannon, pull the pin, the mixture inside catches fire, melts the steel and a howitzer becomes a lawn ornament, frozen stiff, welded solid.

A decade after the 9/11 attacks, to those who follow controversy and apply some brainpower to things other than sports scores, the science and engineering “out there” says that, though planes may have hit the World Trade Center, I wasn’t there, so I don’t know – I only believe what I see with my own eyes and only part of that anymore – the “flying aluminum beer cans,” aircraft made of thin and flexible aluminum can’t cut steel, no matter how fast, and jet fuel, a form of cheap heating oil actually, can’t melt it either.

Go to Home Depot and tell them you want to cut steel.  Ask them what aisle the kerosene torches are in.  See if they send you to the marshmallow hammer section.

See, we are doing it again, seduced, sucked in, chasing the “how” when the “who” is staring us in the face.

The “why” has always been there.  Since 9/11, America has been a virtual dictatorship, trillions of dollars missing, nobody asking about that either, it “dissolved” much like the buildings on 9/11.

Two million people are dead, Iraq, Afghanistan, Pakistan plus so many Americans, Canadians, Poles, even Indians from the Mumbai attacks.

We should add Gaza, a couple of thousand Israeli citizens dead there and how many Iranians killed in terror attacks?

It is all connected, whether the “theory” is the “global chessboard” or “Greater Israel,” the trail of deceit, of lies and secrets, the trail of endless corruption more widespread than anything yet imagined is there.

Whether it is defense “overruns” or stolen oil or American complicity in the new drug cartels, built from nothing and now peddling heroin, $100 billion a year, delivered, not by donkeys but American jets, money not carried in briefcases but moved by wire transfer right under the “noses” of UN organizations tasked with eliminating such things.

The trail leads to areas now that few have the courage to approach.  Journalists now speculate that Osama bin Laden has been dead all along.  It was in the newspapers a decade ago, Benazir Bhutto announced it on television to David Frost.  Video and audio recordings of bin Laden, released during the last decade have been successfully tied to both Israel and the CIA.

Moreover, the world terrorist organization itself, the one we call “Al Qaeda,” may never have existed either, a product of TV soap operas and the wild imaginations of the liars who invented the WMDs in Iraq and created the heroin trade in Afghanistan.

In fact, much of the terrorism tied to the decade of conflict, the London and Madrid bombings, Mumbai, Alexandria, a thousand bombings in Iraq, a thousand more in Pakistan and, perhaps even many of those in Afghanistan are now placed at the door of “rogue” groups, CIA, American political extremists with strong ties to Israel or the intelligence services of Israel and India working together.

Secret reports shuffled back and forth in Washington, Islamabad, Kabul, Baghdad and London have been saying this all along, reports immediately classified as very secret because they are very true.

Then we return to the greatest single crime of all, perhaps of all time and the curious affair of “nano-thermite.”

Again note; while the “nano-thermite” discussion is going on, nobody has been arrested, not anyone really important, really complicit, though really important crimes have obviously been committed.  In fact, the criminals have been more than a bit successful at derailing any pointed inquiries about their criminal acts themselves, perhaps aided by the “convenient” and seemingly endless controversy over “how” that takes up everyone’s time.

What does this say about those who push “how” over “who?”

“The best way to control the opposition is to lead it ourselves.”
Vladimir Ilyich Lenin

Perhaps we can stop for a moment and do a “tasking” for the groups paralyzed with “how” and inexplicably less than “curious” about “who.”

With hundreds of scientists and engineers, architects who design buildings, perhaps even some that know how to tear them down, let’s get a few of the initial questions out there for them.  If “bad guys” used “nano-thermite” to melt these massive structures, a bit more “how” needs to be asked.

This “how” should have immediately been followed by a “who” inquiry.  We can talk a little about that one too.

The government’s cover story, the one that started out with airplanes and box cutters, hijackers, missing airport video, pristine passports floating from the sky while steel girders glow and sizzle, pouring down like fireworks, we can put this aside, to the sane at least, with a short analogy.

This is an experiment you can try in your own home.  Get a candle, a screwdriver, Craftsman from Sears preferably, any size, oven mitts, and a match.

Light the candle and place the metal from the screwdriver into the flame.  Hold it there for two hours.  You may need two candles, who knows.

You may need the oven mitts but probably not.

What you have done is recreate the fires that we are told brought down the twin towers.

Oh, you can put the screwdriver back into the drawer, let it cool for a minute or two.  No, it didn’t melt or twist or buckle.  It may not even have discolored.  It certainly didn’t light up like a sparkler on the 4th of July.

Sometimes engineers aren’t the brightest people in the world.  Education and common sense are often at odds.  Let’s take a second to look at this from another direction.  Anyone out there ever work on electronics?  Ever use a soldering iron?  Heat travels and dissipates.  If you heat one section of a metal object, it cools rapidly as energy moves down its length.

Nothing was longer than the twin towers, the world’s largest “heat sink.”  Look inside your computer.  Your super-hot processor is sitting in a heat sink.  Now imagine one 110 stories tall, structural steel held together by plates, interlaced and clad with aluminum, the best heat radiating material known.  Ask a carpenter why aluminum windows and doors are a problem, no engineer needed.

If you held a huge blowtorch to the twin towers, the heat would have flowed down the structure, quite evenly I suspect, and radiated across lower Manhattan.

These obvious failings in the “government’s” skewed engineering are why “nano-thermite” is such an elegant explanation.

Where would we start if we were going to prove “nano-thermite” was the “how?”

We would get an amount of “nano-thermite” and test it.  We are told we can’t get “nano-thermite” to test.  This is actually understandable, I guess.  If it is secret “stuff,” then we can’t have it.

Jonathan Cole went to an incredible and highly laudable effort to show how conventional thermite can cut structural steel.

This added legitimacy to the controversy and showed that one mind was thinking in a rational direction.

This is what “step two” should have been;

With trillions of dollars involved, if it could be done, it certainly was.  In fact, there is absolutely NOTHING I am willing to overlook other than hijacked planes made out of aluminum I can easily punch through with my slightly discolored Craftsman screwdriver.

Then, finally, can we start making arrests and let juries decide “who?”