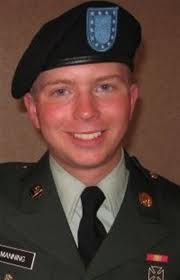 The U.S. government is clearly signaling that murdering, raping, mutilating and assaulting are not nearly as serious as allegedly making available to the public, documents that reveal embarrassing and/or criminal actions of senior government officials.

On March 2, 2001, U.S. Army Specialist Corey Moore was sentenced at Fort Lewis, Washington, by a military judge for a mere 60 days of “hard labor” and a bad-conduct discharge for  mutilating the corpse of an Afghan civilian, assaulting Adam Winfield, a soldier in his unit who whistle blew on the murder and mutilation of Afghan civilians, and smoking hashish over a period of several months ( Lewis-McChord soldier given hard labor, bad conduct discharge).

In contrast, the previous day, March 1, the U.S. Army filed 22 additional offenses, including “aiding the enemy” which is punishable by death, against alleged whistleblower Bradley Manning.  The first charges against Manning included leaking classified information, disobeying an order and general misconduct.

If found guilty, Manning could  be sentenced to life imprisonment or death for exposing documents that show numerous criminal acts committed by officials of the U.S. government.

For mutilating a body and assaulting a fellow soldier, according to Army spokeswoman Major Kathleen Turner, Moore’s “hard labor” sentence will be carried out in Moore’s unit, not in a prison. Turner said that a supervisor from his unit will give him a list of tasks and chores to do each day to be performed under guard.  (US Soldier gets hard labour in murder case).

Manning is in his eighth months of pre-trial solitary confinement in a military prison and has been subjected to emotional and psychological torture, most recently being forced to remain nude during the day in his cell.

Twelve soldiers, all members of the Bravo Company, 2nd Battalion, 1st Division’s Stryker brigade, based in southern Afghanistan’s Kandahar region, are accused of the executions and mutilations of Afghan civilians.

Moore did not face charges of killing the person whose corpse he defiled by stabbing. None of the soldiers so far convicted were accused of murdering Afghan civilians.

The trial of Specialist Jeremy Morlock, who is the first to face murder charges in the deaths of the Afghan civilians, is facing three counts of murder.  His trial was delayed on March 2.

Moore the Mutilator has “Potential” says his defense attorney

Incredibly in her closing argument, Moore’s defense attorney, Captain Vanessa Mull, said Moore had “incredible potential,” and asked the military judge to recognize that potential by allowing him to remain in the service.

The military judge rejected her request and sentenced Moore to “supervised chores” and a dishonorable discharge from the U.S. Army, but no prison time.

About the Author: Ann Wright is a 29 year veterans of the US Army and Army Reserves.  She retired as a Colonel.  Ms. Wright also served in the U.S. Diplomatic Corps for 16 years and resigned in March, 2003 in opposition to the Iraq war.  She was a passenger on the Gaza Flotilla that the Israeli Naval forces attacked and killed nine and wounded over 50.  She is the co-author of “Dissent: Voices of Conscience.”