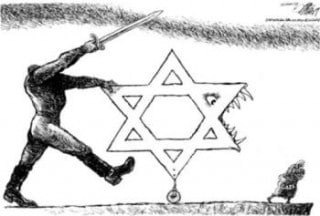 Ynet reported yesterday , that in a BBC global poll gauging  attitudes towards various countries worldwide, Israel came pretty much at the bottom —  There were just three countries less popular than the Jewish State – Pakistan, North Korea and Iran.

The Israelis must find it hard to accept that their  state is one of the least popular countries in the world.   Seemingly,  Zionism — that presented itself as a  promise to bring about  a civilised and lovable Jewish state —  has totally failed.

In spite of relentless Hasbara efforts and the Jewish lobbies around the world, the penny has dropped — People out there see Israel for what it is : Just 21% of those polled wordlwide expressed a positive opinion of Israel.

I guess that the message is clear — the solidarity with the Palestinians is about to become a tidal wave. Palestinian solidarity is the true meaning of humanism.

We are now a mass movement that is becoming increasingly aware of itself as such.