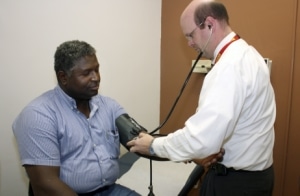 Larry Reid Sr., a 23-year Navy veteran who served in the Gulf War, has been trying to get disability compensation benefits for more than 15 years.

When Reid learned he would have to wait even longer unless he was examined at the VA medical center in Salisbury, the Chapel Hill resident decided it was worth the trip.

“I would have loved to have been able to just go to Durham, but Durham said they couldn’t do it now,” Reid said. “I said, ‘OK, Salisbury’s next. I don’t know where it is, but I’ll find it.’”

Starting this week, W.G. (Bill) Hefner VA Medical Center in Salisbury is taking on a growing backlog of compensation and pension (C&P) exams during what staff term a “blitz” of three one-week sessions.

The hospital, along with eight others in the VA Mid-Atlantic Health Care Network, is dedicating up to 80 percent of its primary care appointment schedule to the exams March 7-11, April 11-15 and May 9-13.

Reid came in Wednesday for a scheduled exam, which he hopes will help settle his ongoing claim along with new medical records. He said he has been dealing with a painful, swollen knee, blackouts and other symptoms he believes are service-related.

The C&P exams are used to determine levels of disability and compensation due to medical conditions associated with military service.

“In the past several years, there has been a significant increase in compensation and pension exam requests that we’re getting,” said Dr. Miguel LaPuz, chief of staff at Salisbury VA Medical Center.

Not only are troops returning from Iraq and Afghanistan, LaPuz said, but Vietnam veterans also are re-applying for benefits. Last year the list of conditions presumed to be tied to Agent Orange exposure was widened to include ischemic heart disease, Parkinson’s disease, hairy cell or other B-cell leukemias.

The VA Mid-Atlantic Health Care Network, which includes all of North Carolina and parts of Virginia and West Virginia, is the only VA network in the nation using the “blitz” method to clear its backlog. The network is behind on about 4,000 to 5,000 requests, LaPuz said.

“Salisbury by itself is caught up, and now we’re trying to help out our sister facilities,” he said. “In three weeks — one week a month for the next three months — we expect to complete about 1,500 exams.”

The goal is to complete these exams within 30 days from the date Veterans Health Administration (VHA) receives the exam request.

Network Director Daniel Hoffman said the Salisbury medical center is meeting this standard and has led the network in performing the C&P exams.

“They have come to the rescue of their sister facilities, and we want to say thank you to them for showing that we are better than the sum of our parts,” Hoffman said. “They are the experts at compensation and pension exams, and their providers are good at this.”

LaPuz said many of the patients they will be seeing have been referred from other centers, such as the one in Durham, that are dealing with a large backlog.

Veterans are given the choice to either come to Salisbury to speed up the process or wait to have the exam at their local medical center. Most of them are choosing to make the trip, LaPuz said, and they will be reimbursed for their travel.

Completed exams will be forwarded to the appropriate Veterans Benefits Administration regional office, where specialists will make determinations and mail notifications to the veterans.

The Salisbury medical center set up a similar program in the fall of 2009 when it fell behind on exams. LaPuz said it helped the medical center catch up, and the system-wide effort is working well.

“Veterans are very pleased, because anything to shorten the time they wait for a determination is very beneficial,” LaPuz said. “They are also pleased with the quality and thoroughness of the exams.”

Andre Green Sr., of Durham, served in the Marine Corps for about 11 years until November of 1991. He applied in November 2010 for an increase in his disability compensation due to post-traumatic stress disorder, and he recently got a letter telling him to come to Salisbury.

“I didn’t mind traveling,” Green said. “It takes a while, and I know they’re backlogged. Think about the number of people doing the same thing. Thousands of military people are applying for disability benefits, so I have to be patient.”

Hoffman said the current blitz is not the only way the regional VA network is handling its increasing workload. A greater number of physicians are gaining experience with C&P exams for the future, and the network also is increasing its use of teleconference technology.