Home World Gilad Atzmon: What About A No Fly Zone for The Palestinians? 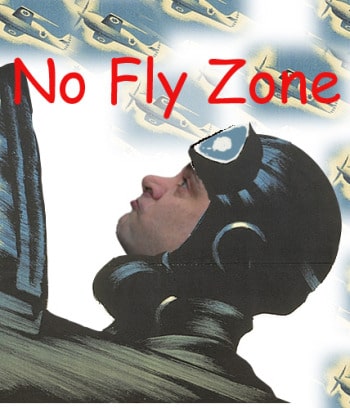 “Even the Israelis in Gaza, when they moved into the Gaza Strip, they moved in with tanks to fight such extremists. It’s the same thing here” Muammar Gaddafi (France 24)

In the last few days the UN have paved the way for a no-fly zone in Libya.

David Cameron and Barack Obama have also agreed to draw up “the full spectrum” of military responses to the crisis in Libya.

British PM David Cameron outlined his conversation with Obama, saying “We have got to prepare for what we might have to do if he [Gaddafi] goes on brutalising his own people…”

I find myself overwhelmed by Cameron’s humanist stand — it seems he really cares about the Libyan people.

And yet, I am left puzzled, for I have never observed Cameron, Obama or the UN being so touched in the same manner by the death of Palestinian civilians, who are also butchered on a daily basis by Israeli air raids. As it seems, in the quote above, Muammar Gaddafi performs far more integrity than Cameron, Obama and the UN. Gaddafi clearly manages to question the Western moralist agenda. If the UN is so enthusiastic to bomb Libya, shouldn’t it really start with Israel?

I would contend that for a moral interventional argument to be justifiable, it must be primarily grounded on moral integrity.

If America and Britain are, indeed, ‘morally driven’ why do they fail to protect the people of Palestine? Why do they allow Israeli airplanes decorated with Jewish symbols to drop bombs in Gaza? Is it because Israeli bombs are kosher somehow?

But I guess that we already know the answers —  First, they want the Libyan oil and  moral intervention is just a pretext for another oil war . Second, the American and the British governments are maintained financially by notorious Zionist lobbies: In America it is AIPAC, and in Britain it is the CFI.  It becomes clear that if we want our leaders to save this planet or at least to perform any kind of ethical integrity, Jewish lobbies must be confronted.

I’d like to suggest to Cameron and Obama that if they behaved morally for a change and imposed an immediate no fly zone on Israel they could contribute significantly to resolving one of the most dangerous conflicts in the world today.

Such an act would also contribute to solving the current energy crisis — and most significantly, peace might actually prevail.