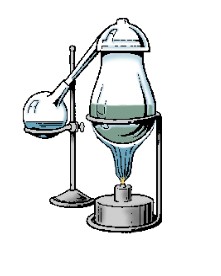 Grappa is a distillate made from grapes that are grown and vinified in Italy. Distillation, which is separating the alcohol from the water, must take place in Italian distilleries that meet EU and national requirements. Grappa is the only distillate that can be made from solids.

The solids must be put into an alembic still. Stills may be either a simple pot still or a continuous-column still. Since the continuous-column still works at all times, the grape skins (pomace) and grape residues are supplied at a constant rate and then after a second fermentation the resultant alcoholic solution becomes grappa.

Simple pot stills work differently in that the production is in stages. The residues and grape skins are added to the boiler, are heated and distilled and then emptied. The pot stills may be of three types. The oldest and least used method today is where the pot is put directly over the heat. The Baine-Marie is the double boiler and allows for very slow distillation. This is also an older method but still used to day as it gives good results. The third pot still is the most cost effective and employs steam that is transferred into a series of boilers which have perforated baskets that hold the skins.

The pomaces that are delivered to the distillery can be of three varieties which depends on the degree of their fermentation. There is the pure which is from white wines, half-fermented from rose’, and fully fermented from red wine. The fruit sugar in the pomace is transformed into high-percentage alcohol by two steps, the first being pressing and fermentation and the second is distillation.

The origins of grappa are in dispute, with Italians claiming that it was invented by them. Some historians believe that the drink first appeared in the 5th century and give the distillation skills to the Burgundians. Others think the northern Italian inhabitants, the Friulians, started grappa production before the 5th century. Another guess is that Sicily was occupied by the Arabs during the 9th century and the Arabs brought distilling to Europe. Generally grappas date to at least 1500 year ago.

It is certain the wine has been produced in Italy for centuries and that grappa is a by-product of wine making. Grappa started as the drink for the poor man, but has acquired the status that is relegated to expensive brandy and is sought after by the Italian tourist. Grappa is becoming a specialty and luxury item. Marc liquor is distilled from grape skins that remain in the wine press after regular wine production. Grappa is a marc-based spirit and Italian producers take pride of the high-quality grappa that is made from the marc after the first pressing.

This marc contains the original flavor of the grape used and the final grappa product will resemble a brandy or fruit-based liquor. The quality of the distilled grappa is also determined by the amount of moisture that is in the pomace, with higher moisture content giving improvement of quality.

The Moscato grape was probably the first grape used to make a grappa.

Skins from the grape must give their organoleptic qualities to the grappa. A term that describes grappa made from the skins of single grape varieties is monovarietal, but a new terminology term to refer to this is grappa di vitigno or vine grappa.

Grappas can also use the DOC, DOCG and IGT wine terms when they come from (Chianti, Barolo, Brunello, Soave, Amarone, etc.) and are made from the residues and skins of these same wines.

Labels for grappa contain the grape variety, where the grape comes from, and the type of still that has been used in the process. Grappa is classified by the use of four descriptions. All of the grappa descriptions may be called aromatic if it is made with Moscato, Muller Thurgau, Traminer, or Sauvignon grapes that are either semi-aromatic or aromatic.

Grappa should be served neither too cold nor too warm. Young grappas are best served between 48 and 55 degrees F. and the aged grappas between 60 and 64 degrees F. It is preferable to serve too cold as the liquid can be warmed by holding the glass in the palms of the hand and checking the aromas as the liquid’s temperature rises.

The best glass in which to serve a grappa is a tulip-shapped, pot bellied crystal glass that will hold 3 to 5 ounces. The alcohol level of the grapes may not be less than 40 percent and cannot be blended with grappas that are produced in other areas. Both EU and Italian laws state that geographic appellation must reflect the specific geographic area from which the specific grape varieties are grown and vinified.

The best known grappas come from those distilleries that are located at the foothills of the Italian Alps with the primary locations of Italian grappa production in the regions of Veneto, Friuli, Alto Adige, Trentine, and Piedmonte. Even with this in mind southern areas of Umbria, Tuscany, or Sicily produce grappas of distinction. Now each Italian distillery will produce its own grappa so thousands of different grappa varieties exist.

Creative packaging, in lovely blown bottles of varying shapes, has made grappa competitive. Grappa producers have the priority of quality, not quantity and these “showy” bottles attract the eye of the shopper.